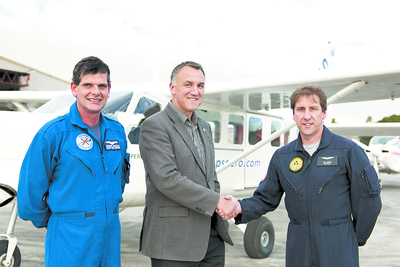 DESPITE receiving more than $1 million from the State Government, Latrobe Regional Airport has welcomed the news with cautious optimism.

Gippsland could witness an influx of approximately 300 jobs following the success of a $1.24 million application under the Regional Aviation Fund for the expansion of the airport, which will support the manufacturing of GippsAero’s GA18 airvan.

However, the success of this project hinges on the Federal Government approving an application of $3 million under the Regional Development Australia Fund, according to Latrobe City Mayor Ed Vermeulen.

“We’re not underpinning the importance of the State Government announcement… however, it is one key part in the total financing package necessary to ready the airport for the manufacturing of the 18-seater aircraft,” Cr Vermeulen said.

“We know we have a good economic case (for the Federal Government funding) and we hope we get a positive response.”

On Tuesday, State Aviation Industry Minister Gordon Rich-Phillips announced in parliament the State Government was supportive of GippsAero and its hopes of manufacturing the GA18 airvan.

“I was very pleased to confirm at the Public Accounts and Estimates Committee hearing last Friday that the grant being sought with respect to Latrobe Regional Airport has been funded under the Regional Aviation Fund,” Mr Rich-Phillips said in parliament.

The Federal Government is expected to announce the success of the $3 million application later this month.

GippsAero, which works from its base at Latrobe Regional Airport, recently celebrated a new milestone after it successfully completed the first flight of its latest aircraft, the GA10.

GippsAero chief executive Dr Terry Miles said the debut flight of the GA10 was a new milestone for the company.