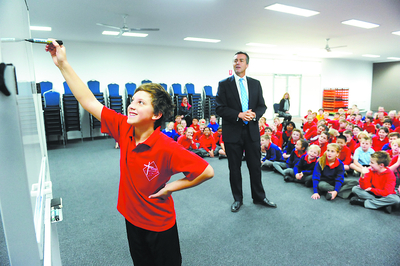 SCHOOLS, not families, should be in charge of any Federal Government education bonuses, according to a local member of parliament.

Federal Member for Gippsland Darren Chester took the government to task last week over accusations by Families Minister Jenny Macklin in The Express he had said ‘no’ to the schoolkids bonus budget initiative.

Ms Macklin had called on Mr Chester to explain why he had supported “ripping vital payments” out of the hands of families, referring to the bonuses announced for primary and secondary students to pay for items including uniforms, text books and excursions.

The minister said the bonus would help 9450 families and Mr Chester’s opposition to it was a “kick in the guts” for struggling families.

In parliament Mr Chester said the government had “guillotined” any debate on the bonus and he had not had a chance to speak on the issue.

He said it was unreasonable of Ms Macklin to call on him to explain himself when “the government stopped members opposite having the chance to have their say”.

He told parliament he would have “no problem with a schoolkids bonus if it means the money will be spent on the kids themselves and their education needs”.

“Some families are in a situation where they do not have a lot of disposable income because some of them have quite simply not been good at managing money in the past… we need to accept that is a reality” Mr Chester said.

“Allowing funds like the education maintenance allowance, which applies in Victoria, to be paid directly to the school enforces a savings system that benefits children and their community,” he added.

Mr Chester also used his speech to parliament to highlight the “hypocrisy” of a government position allowing Australia to mine coal and ship “millions and millions of tonnes every year” to Asian countries where “as far as I know, when it gets to these destinations, it is burnt in coal-fired power stations”.