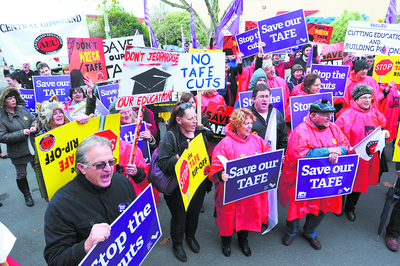 VERBAL attacks against the State Government’s budget cuts to the TAFE sector were launched by students and teachers in Traralgon this week.

Students and teachers from Central Gippsland Institute of TAFE were joined by education union members as they publicly protested against the recent budget cuts.

The rally was held outside State Skills Minister Peter Hall’s office in Traralgon, and saw a gathering of about 100 TAFE supporters.

For some teachers who are facing potential redundancies within the next few months, their anger and disappointment over the cuts was shared by those gathered.

“It’s not just our jobs at stake… but it’s cutting off opportunities for young people to continue their lives in a positive way,” GippsTAFE art and design teacher Phillip Berends said.

“About 60 odd students (enrolled in art and design courses) are in jeopardy.

“For those who are only half way through their course… they are very uncertain of their future.”

The Traralgon rally was one of many held across the state, according to Australian Education Union Victorian branch president Mary Bluett, who addressed the rally on Tuesday.

She said a large number of Gippsland students were provided with job opportunities after their courses, but the recent cuts would hinder these.

The release of the State of the Valley report by Mr Hall last week was also criticised at the rally, with National Tertiary Education Union Victorian secretary Colin Long branding the report “a joke”.

“Why have a report identifying skills when… courses are being stripped away from regional communities?” Mr Long said.

For GippsTAFE Diploma of Visual Arts student Fiona Collins, the cuts not only “stopped (my) dreams”, but threatened to snatch pathways from regional students.

“I’m a mature-aged student… and wanted to make sure I do more (with my life) and just not (be) on the pension,” Ms Collins said.

“But it’s like (the government) don’t care and are just saying ‘tough’.”

However, according to James Martin, a spokesperson from Mr Hall’s office, “more money, not less is going into funding for training in apprenticeships, higher level skills needs and areas of skills shortages”.

“While taxpayers subsidised training in lifestyle courses such as aromatherapy and fitness training might be nice to take part in, they will not deliver the types of qualifications and skills needed to assist the Latrobe Valley,” Mr Martin said.

“That is why the Victorian government is redirecting more money into important skills areas.”