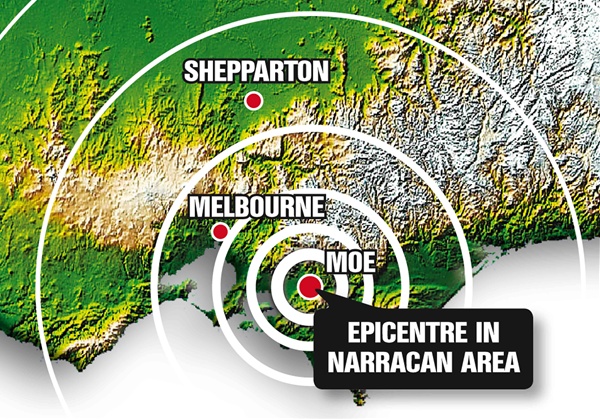 AFTERSHOCKS from the earthquake which struck the Latrobe Valley this week may be felt for years to come and a potentially larger quake may follow.

That was the daunting message from a leading seismologist this week, who also claimed his centre’s data showed the quake that saw the Valley hit national news headlines this week measured 5.5 magnitude on the richter scale and was the largest in Victoria for more than 100 years.

While accounts of the scale of the quake differed according to various sources, Environment System and Services Seismology Research Centre head seismologist Adam Pascale told The Express his organisation had seismographs located “very close” to the epicentre of this week’s quake, so “we have a good handle of the location”.

He contravened claims of a 10 kilometre quake depth, saying ES&S data showed it was about 15km deep.

Mr Pascale said there was no way of knowing “if this was a foreshock to a larger event”.

He also said the possibility of another quake of the same magnitude within weeks could not be discounted.

“After the Korumburra earthquake (last year),a few weeks later there was another one of a smaller magnitude so it’s not unreasonable to see this happen again,” he warned, advising people to seek cover, preferably under tables, “if they start to feel something”.

Public knowledge on how to respond to earthquakes was “not common” in Australia “due to us not having many events” but Mr Pascale said falling debris was the main cause of injury.

He conceded we were “all a bit vulnerable” given there was no way to predict a quake’s magnitude or timeframe, but given quakes could be “part of a sequence”, a heightened awareness was advisable now, with aftershocks expected to continue for “weeks, months and possibly years”.

Earthquakes were caused by rocks breaking in response to stress by a tectonic plate being “pushed around”, Mr Pascale said, adding that “the rock now has to settle back into a point where it can start absorbing that stress again so it will keep settling and breaking until it finds its place”.

The largest aftershock so far was felt several hours after the main event and measured 3.3, he added.

While Australia sits “totally within a tectonic plate”, the Gippsland region can “take a lot of stress”, according to Mr Pascale.

This means “when that stress is released it causes a larger event” as opposed to other areas with “softer rocks which are better for dissipating the energy”.

“When the rock breaks energy waves travel out and the closer you are the longer you will feel the isolation,” he said, adding that those closest to the epicentre, about 10k south west from Moe, would have felt the impact for 30 seconds or longer.

While anecdotal reports suggested people as far as away as the New South Wales border felt the effects of the quake, some for up to one minute, Mr Pascale said it would not have lasted that long but “it is hard` for people to judge that because when it’s happening it feels like forever”.

Though the quake provoked intense excitement across Victoria this week Mr Pascale said “a magnitude five would not even make news in California, but here it is a big deal”.