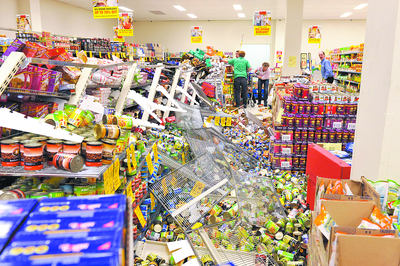 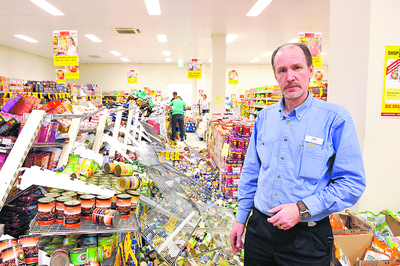 The epicentre of Tuesday night’s earthquake may have been in Narracan, but try telling that to the manager of Morwell’s Not Quite Right store.

Manager Les Svajcer drove to the store after feeling the quake in Traralgon and said “everything looked fine” when he arrived.

“But when I walked in and saw the middle of the store, things looked a bit different,” Mr Svajcer said.

“I started taking photos straight away and sent them through to the area manager.”

However, according to NQR chief executive Graeme Holman, who arrived at the store Wednesday morning, the building was structurally sound.

“There’s no problem there (with the building), it’s really just the damage to products and shelving,” Mr Holman said.

“We were able to get about eight staff from other stores to come in and help with the clean up, which should take around five days.”

Closed-circuit television footage showed the shelves vibrating, then folding in a wave-like motion as products crashed to the floor.

Mr Holman said around 30 to 40 per cent of the store had been affected, but was thankful no one was hurt and the damage was largely confined to one area.

“The next step is to take everything off the shelves, order new ones and re-shelve everything,” he said.

“If new shelves aren’t immediately available, we’ll be using alternative displays such as boxes so there’ll be no disruption to our operating hours.”

Mr Holman confirmed some damaged stock would be destroyed, but discounts would be offered on items that were not “crushed or had their seals broken”.