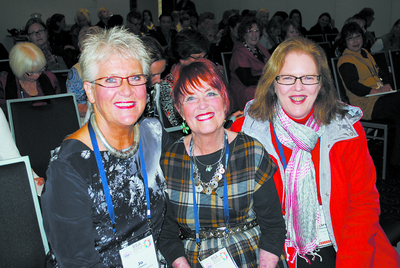 AN ambitious project allowing kidney dialysis patients the opportunity to go on holiday is likely to see a world-first mobile satellite unit established in the Latrobe Valley.

A local team is now committed to seeing Vince’s dream of having the dialysis bus on the road by the end of the year, become a reality.

Past weeks have been significant for the team of Latrobe Regional Hospital dialysis patients and staff, Kidney Health Australia staff and Vince’s family, who remain devoted to the cause and recently accepted an award on their father’s behalf.

Vince’s son Marco told The Express the award, presented by KHA and received by himself, his mother and two sisters, was a “fantastic honour”.

He said his father was aware he was to be recognised formally for his work in leading the Big Red Kidney Bus campaign but “he wasn’t overly impressed because he figured he hadn’t done anything yet because it wasn’t finished”.

“It has been a fantastic achievement though,” Marco said, of the project which has so far raised $25,000 towards fitting out a bus which it secured, via donation, from Grenada.

Latrobe Valley Bus Lines has also offered drivers for the bus, while multiple local organisations have donated goods in kind to help equip it.

About $100,000 is required to renovate the bus to hospital standards, which will then be staffed with nurses and positioned in holiday locations across Victoria.

Renal patient and active committee member Suzie Picken, together with dialysis unit nurse Bernardette Lewindon, recently presented a paper on the bus project to the Renal Society Australasian Conference 2012 and predicted “once this is operational it’s going to be a world first”.

“I believe there are other buses out there now but none are staffed and this would be the first staffed satellite unit of its kind,” she said.

Suzie and Bernardette were rewarded with $500 for their efforts at the conference, taking out the Best Novice Presentation category – the money has been added to the project’s coffers.

Marco commended the local team he said had “taken on Dad’s idea and carried it ever since.”

“It may have been Dad’s idea but it’s amazing how it has given that group a focus and attracted large donations from local businesses,” he added.

Marco said his family remained “hands on” with the project with his mother and sisters regularly attending committee meetings and his mother – “a chocolate-selling machine” – proving adept at fundraising.

Suzie, who sat “three seats away from Vince” on his dialysis shift and has battled renal damage since the age of 19, said the support of local nurses for the Big Red Kidney Bus had also proved critical, “and we are very appreciative”.

She said increased pressure on dialysis units, and a subsequent shortage of chairs, meant ‘holiday seats’ were “less and less” available to patients, forcing them to stay close to home for their treatment.

That treatment requires patients to be hooked up to machines for hours on end about three days per week.

Suzie said a fellow patient told her the shortage of dialysis seats statewide meant he had been unable to attend the recent funeral of a relative.

Patients risk serious side effects if they miss their treatment.

“Patients can miss out on so much, even being able to travel to celebrate Christmas with family,” Suzie said.

“It is getting harder and harder”.

Data shows there are about 36 kidney dialysis patients at Latrobe Regional Hospital and others throughout Gippsland.

The Big Red Kidney Bus Project master plan provides for an online booking system for patients to book a seat on the bus at various holiday destinations.

The bus will have three seats but rotating shifts mean it will cater for 12 patients per week.

Donations can be made at any Bendigo Bank branch.