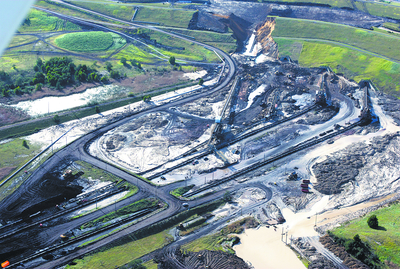 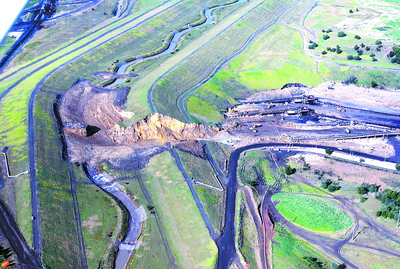 RELENTLESS rain and damaging claims about site stability, worker safety and the potential contamination of Gippsland’s waterways are plagueing TRUenergy’s efforts to repair the Yallourn open cut coal mine.

On Friday TRUenergy was forced to deny Environment Victoria claims that an “inherently unstable” site, subject to continued flooding, meant workers were being endangered as they sought to repair damage to its main conveyor system caused by the Morwell River’s collapse into the mine earlier this month.

Calling for an independent inquiry into “ongoing problems” at the mine Environment Victoria campaigns director Mark Wakeman said “the problems at Yallourn appear be much more serious than the company is letting on”.

TRUenergy spokesperson Carl Kitchen refuted suggestions safety was being compromised, telling The Express “we would not be doing what we are doing (if that were the case)…safety is paramount and that has been demonstrated in that, to date, there have been no major injuries on site.”

“We are not just running off and doing things, this is all based on expert advice and is being overseen by the government,” Mr Kitchen said.

Australian Manufacturers Union spokesperson Steve Dodd said although “some (safety) issues” related to rain and mud had been raised by members, TRUenergy and relevant contractors had assured the union, as recently as Friday morning, that “all safety protocols are in place.”

Mr Dodd said the union had been unable to verify safety issues as TRUenergy’s “entry procedures” had complicated attempts to access the site.

He said the union had subsequently exercised its right under Fair Work Australia legislation to ensure access.

“We have said to both Yallourn and contractors that we won’t cop our blokes being at risk,” he added.

“The unions do understand the difficulty the whole site is in though and we are not there to try to put blockers in the way…but just because the mine flooded doesn’t mean safety protocols can be thrown out the window to get these units back up and running,” Mr Dodd said.

Several sources claimed, however, that environmental protocols had been contravened by the situation’s urgency, referring to Environment Protection Authority approval secured by TRUenergy to pump Morwell River floodwaters from the mine into the Latrobe River via a 30A permit.

An EPA spokesperson confirmed the emergency, temporary approval allowed for practices that “would otherwise be an offence under the Environment Protection Act 1970”, but still included “stringent conditions” related to monitoring and ensuring there were “no long-term impacts to the environment”.

Mr Wakeman said he understood about 700 megalitres of water had “been accumulating on the mine site each day since the company dammed the Morwell River” and the “low-quality” water was now being pumped into the Latrobe River and Gippsland Lakes.

He also said EV had “grave concerns” about the potential impact on the health of those waterways.

Democratic Labor Party Senator John Madigan also told the Senate last Thursday the water being pumped was “likely polluted” and the EPA was “taking the words of an electricity company that there would be no ramifications” instead of conducting its own research.

He claimed “thousands of megalitres of potentially toxic water” could threaten farm fishing and tourism industries as well as protected wetlands.

Mr Kitchen said monitoring was being undertaken by an independent National Association of Testing Authorities certified company. “They have to certify those results and provide them to the EPA to review themselves,” he added.

According to the EPA, the approval “sets strict limits on sediment into the river” and it had inspected the site on Thursday, finding “slightly higher turbidity (cloudiness due to silt), but no significant increases in other contaminants like heavy metals”.

Meanwhile, TRUenergy reported a stockpile of about 80 hours of coal as of Friday and repair efforts severely hampered by high rainfall, forcing the power station to reduce generation back to one unit.

The Australian Energy Market Operator had indicated this was “not expected to affect supply reliability,” Mr Kitchen said.

The damaged conveyor had also been taken off-line again until water levels reduced but internal coal trucking operations were expected to resume over the weekend to supplement existing coal stocks, weather permitting.

Response teams had also created a channel allowing Morwell River water to run into an unused part of the mine, and Mr Kitchen said current rainfall and potential further river flows could also see water “redirected temporarily into the East Field mine” which would “reduce coaling activities”.