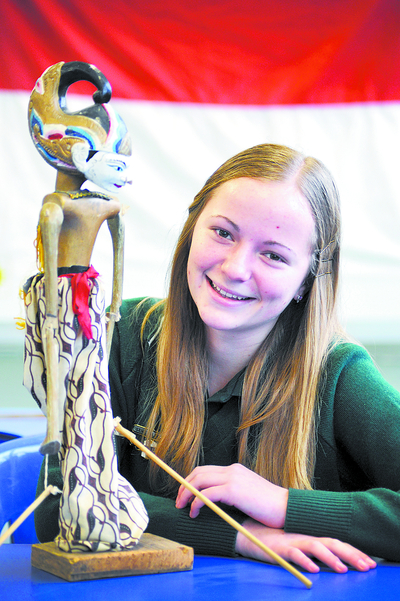 EDUCATION will be the tool used to break through racial ignorance, according to Trafalgar High School student Estelle Fraser.

For the past three-and-a-half years the 15 year-old has been learning Indonesian and recently won the Victorian Indonesian Language Teachers Association state listening and speaking competition, held at Melbourne University.

“Some people aren’t motivated to learn a language and there are people set in their ways,” Estelle said.

“Because our society is developing so rapidly we need new ways of communicating.

“We have such a multi-cultural society, I think it is important to know another language.

“Indonesia is one of our closest neighbours, it is important to keep that local connection; it is hard to keep (that connection) if there is a language barrier.”

At the competition Estelle competed against more than 200 students, many from strong Indonesian backgrounds.

She said there were some rigorous questions from a panel of judges which focused on daily activities.

Estelle’s impressive Indonesian language skills were recognised earlier this year when she received a two-week scholarship from the Department of Education and Early Childhood Development to experience Malaysia.

Estelle studied at Sekolah Indonesia, Kuala Lumpur and lived with a Malaysian family.

“It was amazing because you were surrounded by the culture; it inspired me to continue to learn the language,” she said.

“Being immersed in a culture is so different to just learning a language.”

Estelle plans to travel to Malaysia following her year 12 accelerated program studies and she hopes to get into a university to complete a communication degree.

Proud of her success is teacher and mentor Deanne Crosby, who said Estelle influenced classmates to improve their language skills. Indonesian has been offered at Trafalgar High School for 15 years, and Ms Crosby said learning an Asian language nurtured the strong relationship with Indonesia.

“It hasn’t come easy; she is very passionate and diligent student and has a great love for the language,” Ms Crosby said.