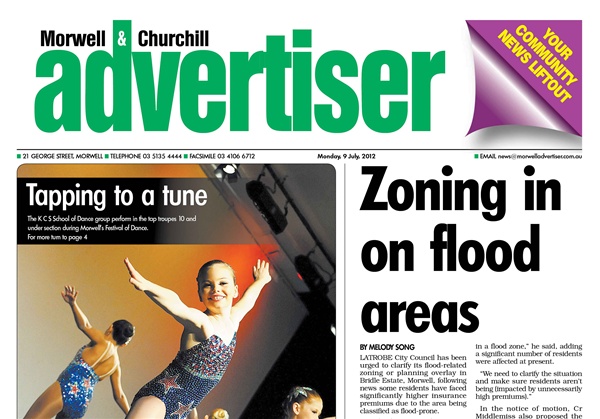 LATROBE City Council has been urged to clarify its flood-related zoning or planning overlay in Bridle Estate, Morwell, following news some residents have faced significantly higher insurance premiums due to the area being classified as flood-prone.

“I’ve heard anecdotally some owners have had their premiums rise $3500, and seen increases of $2900 to premiums,” Cr Middlemiss said.

“One person said he’d elected not to insure his property as he can’t afford it.”

Expressing concern houses which were not flood-affected had also been classified as flood-prone, Cr Middlemiss suggested council have a “clearly-drawn map” to assist residents and insurance companies in identifying the properties.

“This would help residents and insurance companies identify where they are in terms of the overlay, and if necessary, provide a letter saying the resident is not in a flood zone,” he said, adding a significant number of residents were affected at present.

“We need to clarify the situation and make sure residents aren’t being (impacted by unnecessarily high premiums).”

In the notice of motion, Cr Middlemiss also proposed the map of Morwell East, with special reference to the Bridle Estate area, include a notation of the justification for the extent of such zoning.

Cr Darrell White voiced his support for the motion.

“If insurance premiums are rising 300 per cent, it is appropriate we take this work to clarify the situation,” Cr White said.

The Express previously reported one Cobon Court resident saying it was an issue of storm water overflows. Latrobe City Council general manager built and natural environment Peter Quigley had said council would install additional storm water pipes to the area to assist with drainage and would investigate why flooding was occurring in the area.