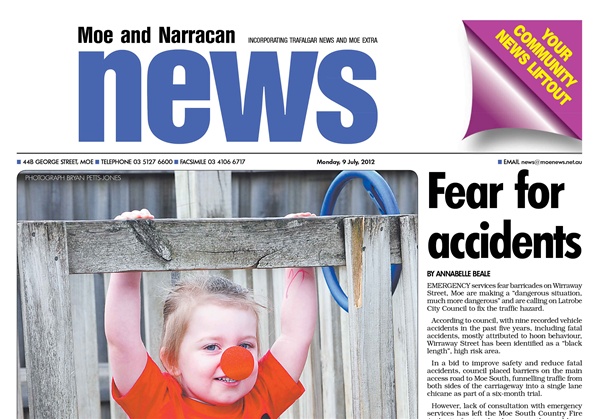 EMERGENCY services fear barricades on Wirraway Street, Moe are making a “dangerous situation, much more dangerous” and are calling on Latrobe City Council to fix the traffic hazard.

According to council, with nine recorded vehicle accidents in the past five years, including fatal accidents, mostly attributed to hoon behaviour, Wirraway Street has been identified as a “black length”, high risk area.

In a bid to improve safety and reduce fatal accidents, council placed barriers on the main access road to Moe South, funnelling traffic from both sides of the carriageway into a single lane chicane as part of a six-month trial.

However, lack of consultation with emergency services has left the Moe South Country Fire Authority fearing the changes to the road have increased the threat to public safety.

Moe South CFA Lieutenant Paul Graham said the recently installed barriers, signage and road markings, installed by council, did not add to the safety of the road.

“These false traffic calming measures could result in serious injury or death to otherwise law abiding road users and have no positive impact on dangerous behaviour,” Lt Graham said.

Despite council working with nearby residents, police and engineers, Moe South CFA was disappointed emergency services were not included in the initial investigation.

“It is extremely frustrating to the brigade that major user groups in Moe had been excluded from having their say on a partial closure of a main road,” he said.

During the recent CFA meeting, the brigade unanimously voted to request council to dismantle the “dangerous barriers and traffic hazards”.

However, Latrobe City general manager built and natural environment Peter Quigley said residents, police and VicRoads had already endorsed the current “trial” option aimed at reducing the attractiveness of the road to hoons.

Mr Quigley said there had been many “near misses” reported recently from residents of the area due to the pre-existing unsafe road conditions.

“This treatment significantly reduces the high level risk of fatality with a substantially lower level risk should an incident occur,” he said.

The installation of the permanent traffic calming measures were completed on 29 June.

“Council have received positive feedback from residents in the area since the works have been completed,” Mr Quigley said.

Further community and stakeholder consultation will be undertaken over the next three to six months to assess the effectiveness of the works.

Council encouraged emergency services, the local community and stakeholders to provide comment on the effectiveness of the traffic safety measures over the course of the trial.