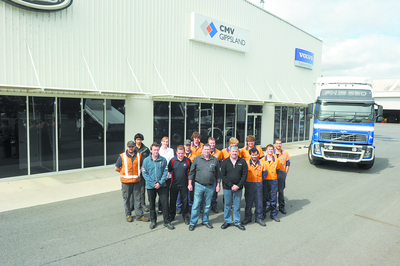 A TRARALGON commercial automotive business has picked up a major contract with one of the region’s largest dairy processors, which has outsourced the maintenance of its dairy tanker fleet.

Beginning mid-August, Traralgon’s Commercial Motor Vehicles group will step up its servicing of Murray Goulburn’s Gippsland-based milk tankers, which delivers milk from dairy farms to its processing factories in Maffra and Leongatha.

In a letter distributed to MG shareholders and suppliers on Tuesday, the company said as part of ongoing moves to downsize its workforce, it had identified its “ageing garage facilities” would require considerable capital investment to remain operating.

Seven positions in Maffra and eight in Leongatha will be made redundant as a result of the outsourcing, coming as part of ongoing moves to slash 300 jobs from its statewide workforce.

CMV Truck and Bus general manager Dale Jackson said the company was looking forward to the extra business the contract would bring.

“It’s going to be a noticeable increase in business for the Traralgon operation, which will be handled by the current operational capacity,” Mr Jackson said.

“We’ve been a supplier (of Volvo trucks) to Murray Goulburn for a number of years, which have ideal specifications for farm pickup works, so we already specialise in maintaining their truck and tanker fleets.”

“We have a very well-established relationship with CMV and we have great faith in their team’s ability to keep our fleet on the road and in top shape,” the MG letter stated.

“We’ve not taken this decision lightly and we are sensitive the changes will impact jobs in local communities.”