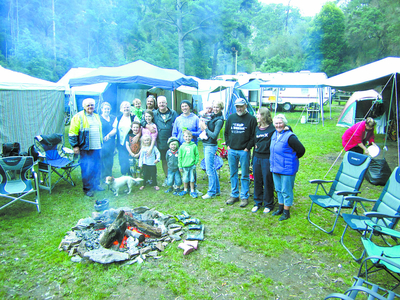 PIONEER Gippsland families like the Lees and the Polkinghornes, regard the historic gold mining town of Walhalla as a priceless part of their heritage, and they are furious about what they see as a campaign to banish them from their ancestral ground.

For generations, they and many other families have spent annual holidays camping on the township’s roadside reserves, but some people involved in developing tourist accommodation in Walhalla want the tradition banned.

The town – which has less than 20 permanent residents – used to boom during holiday periods as hundreds of roadside campers made family pilgrimages that, in some cases, had continued every year for more than half a century.

However in recent years, confusion and misinformation about the legality of roadside camping, along with unauthorised attempts to move campers away, has seen numbers dwindle and Walhalla move closer to its early “ghost town” status.

Until now, what campers did not know is that – except for within 80-metres of an emergency helicopter landing pad – roadside camping is actually permitted within the town, and there are no plans to stop it.

But it will be small comfort to some local traders, like the owners of Walhalla General Store, Norm and Rhonda Aquilina, who say they have already lost at least $150,000 in earnings due to regular roadside campers being gradually driven away.

“I’d say we’re seeing less than half the number of campers we used to, and it’s had a devastating effect,” Mr Aquilina said.

On Easter Sunday this year, the Polkinghornes and their extended families raised their tents on a roadside reserve well outside the helipad boundary, but said despite the Parks Victoria decision, a ranger had warned them they were camped illegally.

On one of the town’s busiest tourist days of the year, a large area with new toilet and barbecue facilities marked by Parks Victoria as “day visitors only” stood empty and unused only feet away from the families’ campsite.

“We will leave this place as tidy as we found it, and we even clear up other campers’ rubbish if they do the wrong thing,” Mr Polkinghorne said.

“But if we’re forced to camp away from the town, we just won’t bother coming here. None of us will.”

The battle can be traced back to a document that has circulated around Walhalla since 2005, stating that camping in the town will be prohibited, and campers restricted to two areas about a kilometre away from the town centre.

Locals say a shire compliance officer handed the notice out to campers and tourists.

The document is headed Walhalla Heritage and Development League and carries – apparently without authorisation – the logos of the State Government, Parks Victoria, and Baw Baw Shire.

Baw Baw Shire Councillor and Walhalla Board of Management member, Cr David Balfour, said neither the council nor the board had made any decision to stop camping in the town, other than around the helipad.

The owner of Walhalla’s Star Hotel and president of the local tourism association, Michael Leaney, said the older traditional campers tended to do the right thing, but others had defecated in Stringer’s Creek and left piles of rubbish behind.

He said he had personally suggested to the Polkinghornes in “fairly strong terms” that if they wanted to camp in the town they should make a financial contribution towards the shire council, which has to pay for the cleaning and maintenance of the area.

However Mr Leaney doubted the authenticity of the 2005 document, and said the tourism association had no problem with people roadside camping in Walhalla, provided they respected the town and cleaned up before they left.