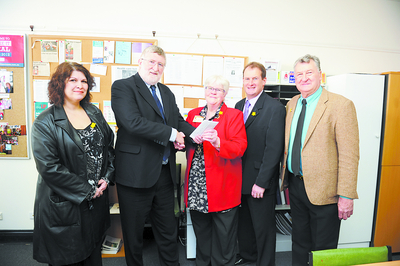 PHILANTHROPIC donations have kickstarted a campaign by the Gippsland Carers Association to see a national-first demonstration project established in the region.

In welcoming a $40,000 donation from the Nissen Foundation on Friday, GCA president Jean Tops said the money, together with earlier support from the William Buckland Foundation, would support a Carers Information and Access project.

The network, to be known as the Regional Carers Network demonstration project, would be the first of its kind in Australia and would “end up being exemplar for the rest of Victoria,” she predicted.

“Over the next year of our services to the unpaid family carers of Gippsland, the association plans to conduct a ‘community awareness and fundraising campaign’ that aims to see the entire Gippsland community stand up for caring families who collectively contribute over $42.6 billion dollars to the taxpayer-funded support requirements ‘bottom line’ across the nation,” Mrs Tops said.

Mrs Tops said as part of the demonstration project, a project team would “travel to all of Gippsland to meet carers in their homes, to establish local support groups, to link carers to existing services and to find ‘hidden carers'”.

“Fifty per cent of carers don’t even identify themselves as carers, they don’t appreciate how valuable they are,” she said.

The cost of a fully-funded program was expected to be about $500,000 per annum, according to Mrs Tops.

She said donations and support will be sought from community and corporate organisations “everywhere”.

Mrs Tops commended Phil Harrington, trustee for the Nissen Foundation (a Perpetual Trusts partner), on his enthusiasm for GCA’s work.

“He’s been a great support of the work we are trying to achieve,” she said.

In response to news which broke late Friday that the State Government would increase its funding commitment to a National Disability Insurance Scheme trial in Barwon (Victoria), Mrs Tops said it was “to be commended” but concerns still remained.

“We have real concerns about whether the trial will make sure it covers all of the people who need the most support – these are people with profound disabilities and high needs” she said.

Mrs Tops said she understood the trial would receive $100 million in federal funding and $40 million from the State Government, which equated to $20,000 for each of the 5000 people to be covered.

“To me, the amount of money being offered translates to a small amount of in-home support.”

Mrs Tops said anyone could find themselves in need of support through an NDIS, through birth, illness or accident, and “every Australian has a responsibility to contribute” to the scheme.