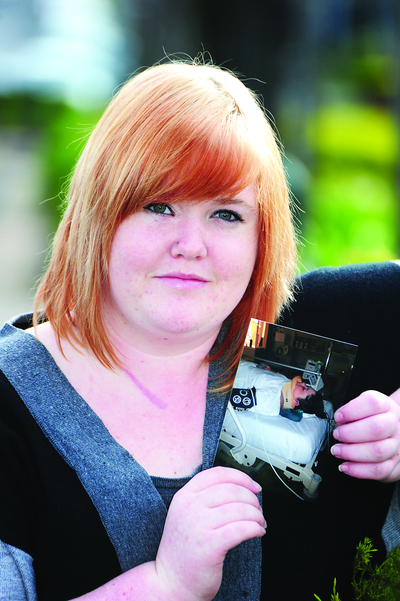 FAINT scars on her chest and face are perpetual reminders to 19 year-old Anneliese Quinn of just how lucky she is – despite being unlucky enough to have been involved in two serious accidents in the past five years.

The still-healing scar she wears on her collarbone is a grim reminder of how different her life could have been; just earlier this year, Anneliese fractured her C6 and C7 vertebrae after she “pin-dropped” on her head in the swimming pool of her Morwell home.

“I dove into my pool on 25 January just as I have done a million times before, but I must have done something different; before my feet were in the water, I had hit my head on the bottom,” Anneliese said.

“I heard a massive ‘crack’; as I hadn’t lost consciousness, I climbed out of the pool and went to sit down in the back yard.

“It was too painful, so I walked another several metres inside the house and went to lie down.”

While events unfolded in a haze of pain, Anneliese remembers thinking she had cracked her skull; only later when she was told how she could have become a quadriplegic, or even died, did she realise the seriousness of the situation.

“I was in shock; the ambulance came, and the paramedics thought it was a concussion,” she said.

“Only after did I get x-rays done at (Latrobe Regional Hospital) did they realise I had broken two bones at the base of my neck,” she said.

Anneliese was transported to the Alfred Hospital in Melbourne where she was told there was a possibility she would need to lie infirm for up to three months, and spend another four months in rehabilitation.

The news distressed the bubbly 19 year-old, who was just a month away from moving from home to commence her undergraduate degree in journalism at Deakin University’s Geelong campus.

“I was really concerned (about whether I’d be able to attend uni),” she said.

The three broken pieces of her C7 vertebrae were removed and replaced with shavings from her hip bone; a painful process compounded by her neck injury, and intolerance to the pain medications.

While her stay in the hospital was not as long as expected at just a week and a half, the recovery was still an arduous affair for Anneliese.

“My body was so weak and my head felt so heavy; I can’t explain just how uncomfortable a neck brace is,” she said.

“I haven’t gone back into the pool yet and have no plans at the moment; I was a pretty good swimmer, so I will eventually.

“The accident could have also affected my voice; I love singing, and thought I nearly lost that, but it has come back okay.”

The former Lavalla Catholic College student has also undergone five operations near her right eye, after she crashed, face-first, into a door handle during a game of handball at school in 2008.

“I was running too fast and hit my face; I thought I broke my nose, but had actually ripped my eyelid and broken my cheek bones,” she said.

“I now have a glass tube in my eye to drain the tears or moisture from my eye.”

But Anneliese does not believe she is entirely unlucky.

“(These are) pretty unlucky things to happen, but when you think of it, I am lucky because things could have gone really wrong,” she said.

“I like to think my perspective has changed; I used to be a drama queen, but (breaking my neck) forced me to grow up.”

The aspiring journalist, who will start uni next year, is determined to “keep going”, but to be more cautious.

“I’m still doing physiotherapy, and probably will be for a long time; I’m still not fully recovered,” she said.

“I forget what it’s like not to have a sore neck.”