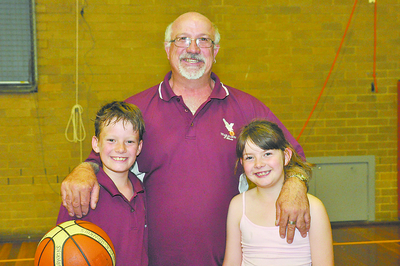 THIRTY-four years is a long time in sport, yet that is how long Bob Hawkins has been involved with the Traralgon Basketball Association.

During that time, Hawkins has been a coach, spectator, player and even president.

The current vice-president, who has been awarded life membership of the association, said he had not played “for a few years now” but still loved coaching.

“I just love coaching the young kids; I get pleasure in seeing them develop and go on and play in higher leagues,” he said.

Hawkins has a son and a daughter who play in the under 10 competition, and he now coaches the under 18 boys squad.

“We played in regionals up in Bendigo in March and did quite well,” he said.

“The squad plays in local tournaments around the Valley and we sometimes travel to Melbourne to get stronger competition.”

The Traralgon father listed coaching the Gippsland under 16 All Star team in 1998 and four years of coaching Country Victoria teams in Albury as career highlights.

Over the years, Hawkins agreed he had been forced to adapt his coaching technique to suit the changing style of the game.

“It’s similar to how the (Australian Football League) has quickened up and they have to have more skills; basketball is getting that way now,” he said.

“It’s a very skilful game now compared to what it was in the early 1970s.”

But what Hawkins really enjoyed about volunteering his time was “meeting people in general” and the friendships he had made.

In keeping with his love of helping out, Hawkins is now the assistant coach of Pax Hill’s under 10 football team, where his son plays, and is also on the committee.

After years of volunteering in basketball, Hawkins said there were differences between football and basketball clubs.

“Footy only goes for three to four months, whereas basketball is all year around,” he said.

The former Gormandale and Rosedale footballer said he could not choose which sport he preferred.

“I couldn’t choose one; I love them both,” he said.