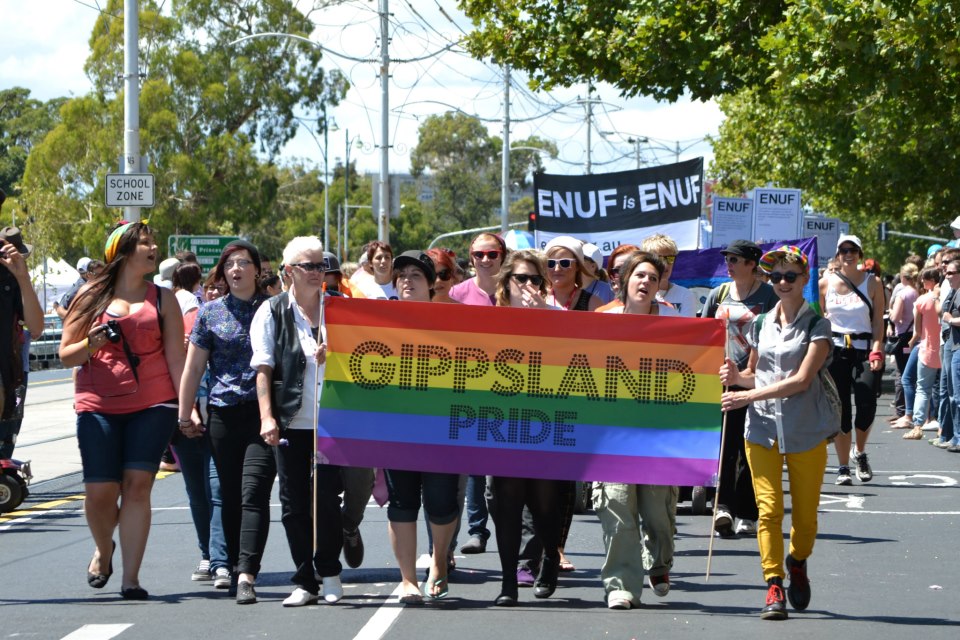 GIPPSLAND is set to become the next regional frontier for pushing equal rights for the gay community, with local support groups to unite in a public rally underway.

Parents and Friends of Lesbians and Gays Latrobe Valley convener Jo Parker said a united and active network among groups and individuals had been “sorely lacking”, and it was time to raise the region’s gay community profile.

Ms Parker said the push for equal rights was already happening in regional areas like Shepparton and Horsham, and while Gippsland still hosted some mainstream conservative views, she said groups were “ready to get their act together” to promote change and acceptance.

“There’s quite a number of support groups around here, and a number of splinter groups; it’s about getting them together, both for support and promoting that (mainstream) acceptance of our rights,” Ms Parker said.

Her comments came after a contingent of about 30 Gippslanders, mostly from the Latrobe Valley, participated for the first time as an official entry in the annual Gay Pride March held in St Kilda on Sunday.

“People from Gippsland have attended the rally on their own or with friends before, but this was the first time being officially registered,” Ms Parker said.

“The feeling of support and community on the day was amazing; we had some elderly ladies (formerly of the Valley) now living in Melbourne come up and join us on their mobility devices.”

Ms Parker said permission was sought from each participant pictured before supplying The Express with a photograph.

“We had to make sure everyone in the shot was okay with it being published, because many gay people still have not come out at home, and at work,” she said.

“Everyone’s experiences in Gippsland are very different; there are a lot of work places out there where people are very comfortable being out, but there are other (workplaces) which are not as accepting.”

Ms Parker, a seasoned advocate of equal rights who made her first Gay Pride march in Tennessee, a conservative ‘bible belt’ state in the United States, said localised public action would help those people know that they were not on their own.

“I’m a gay person myself but also the parent of a gay son, what I would love to see is both my sons getting marriage; marriage quality is important and we want them to experience that,” she said.

“The next marriage equality rally will be held in Melbourne on 11 May, and we are working to arrange something like that (in the Valley) around the same time, but there’s a lot more to it than that; equal rights is so much bigger – marriage just one part of it.”