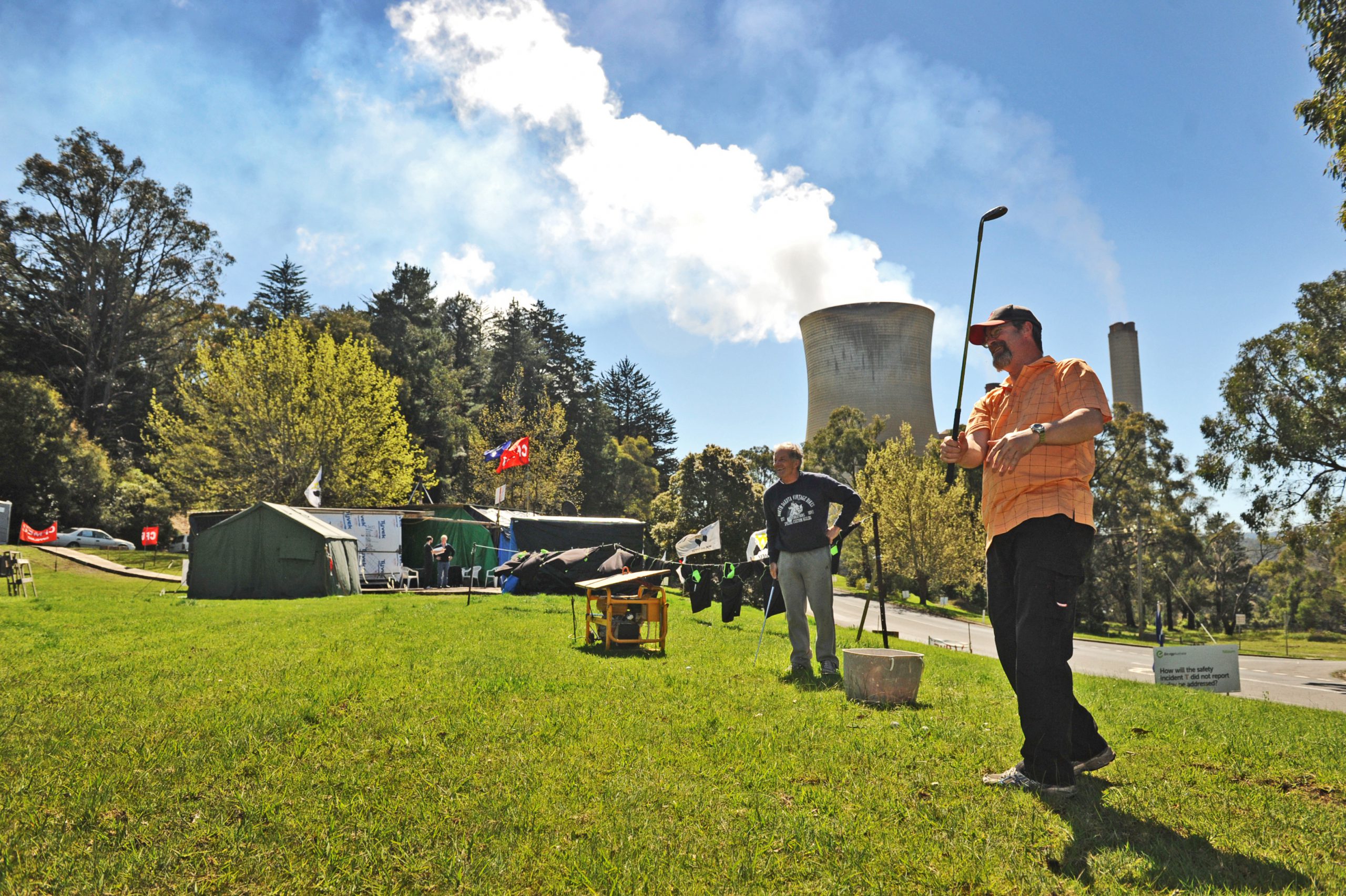 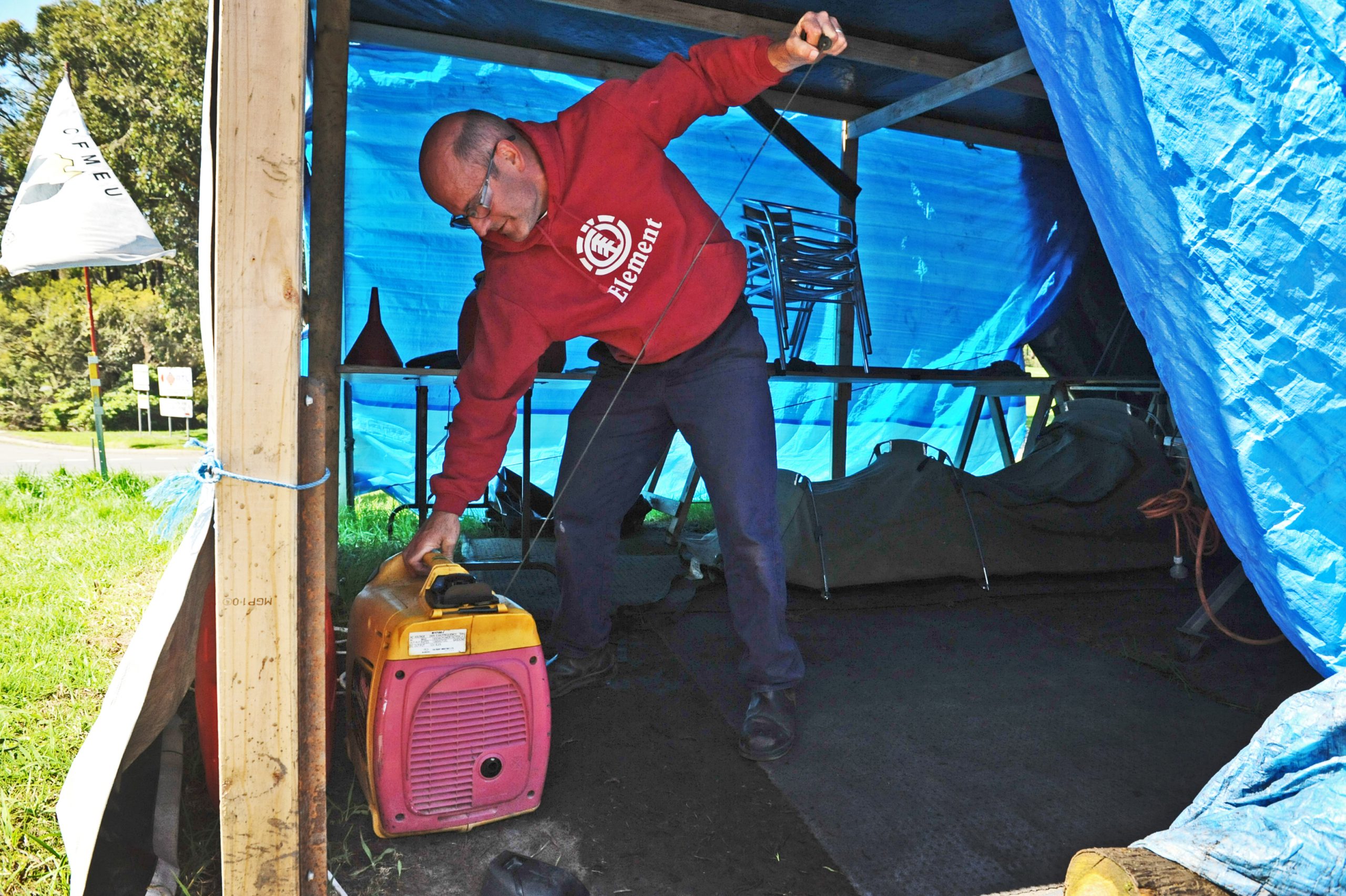 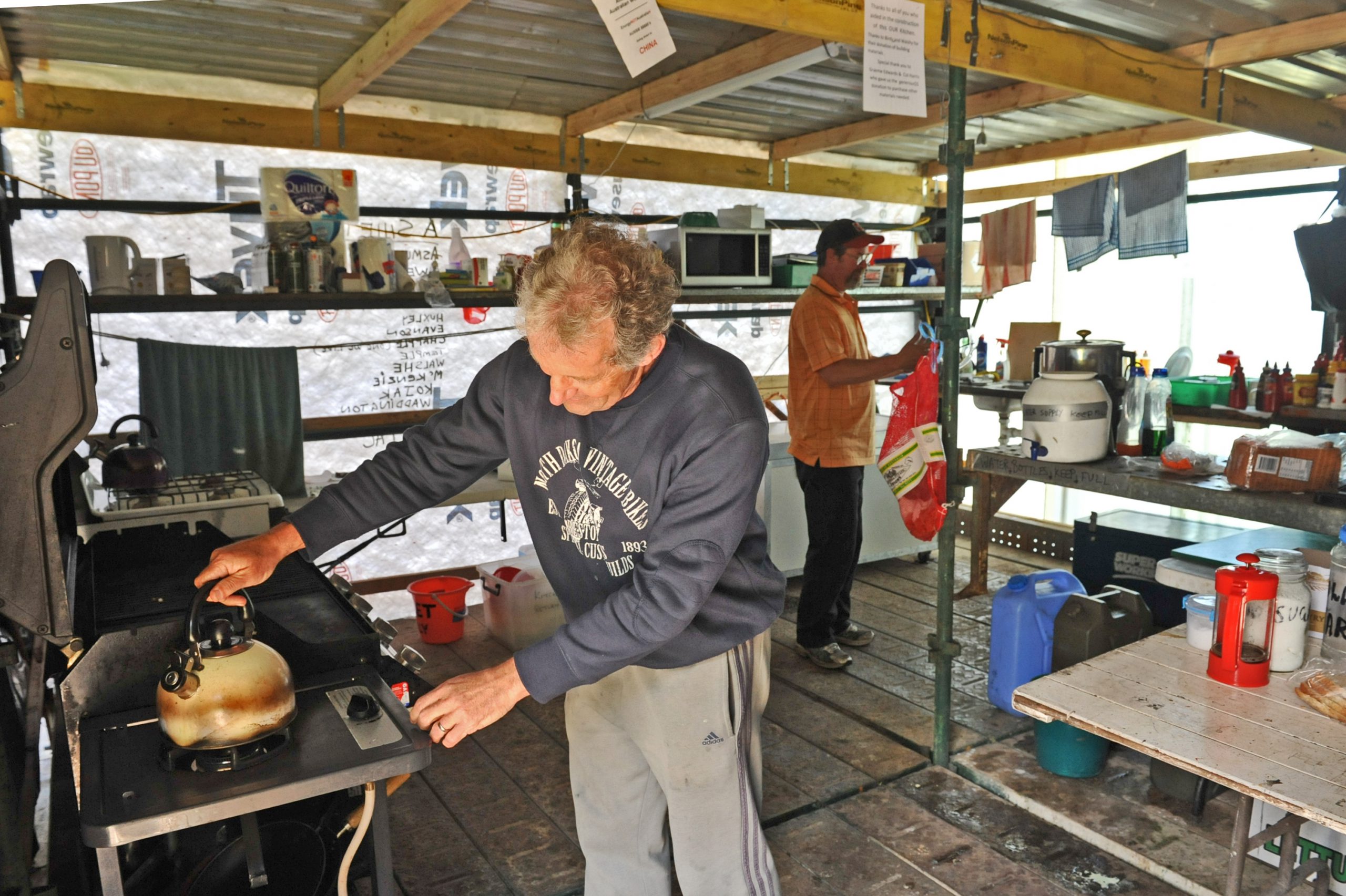 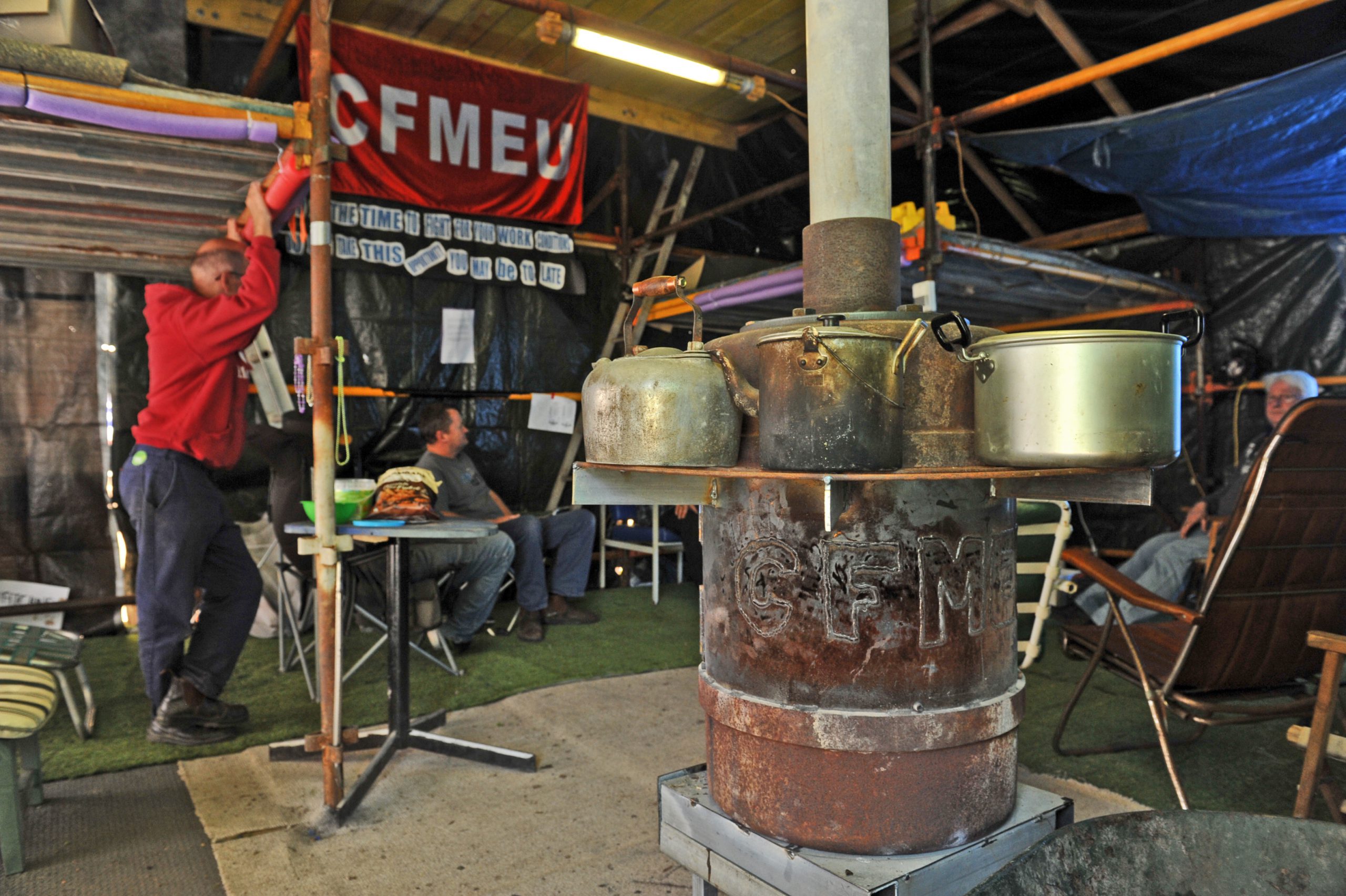 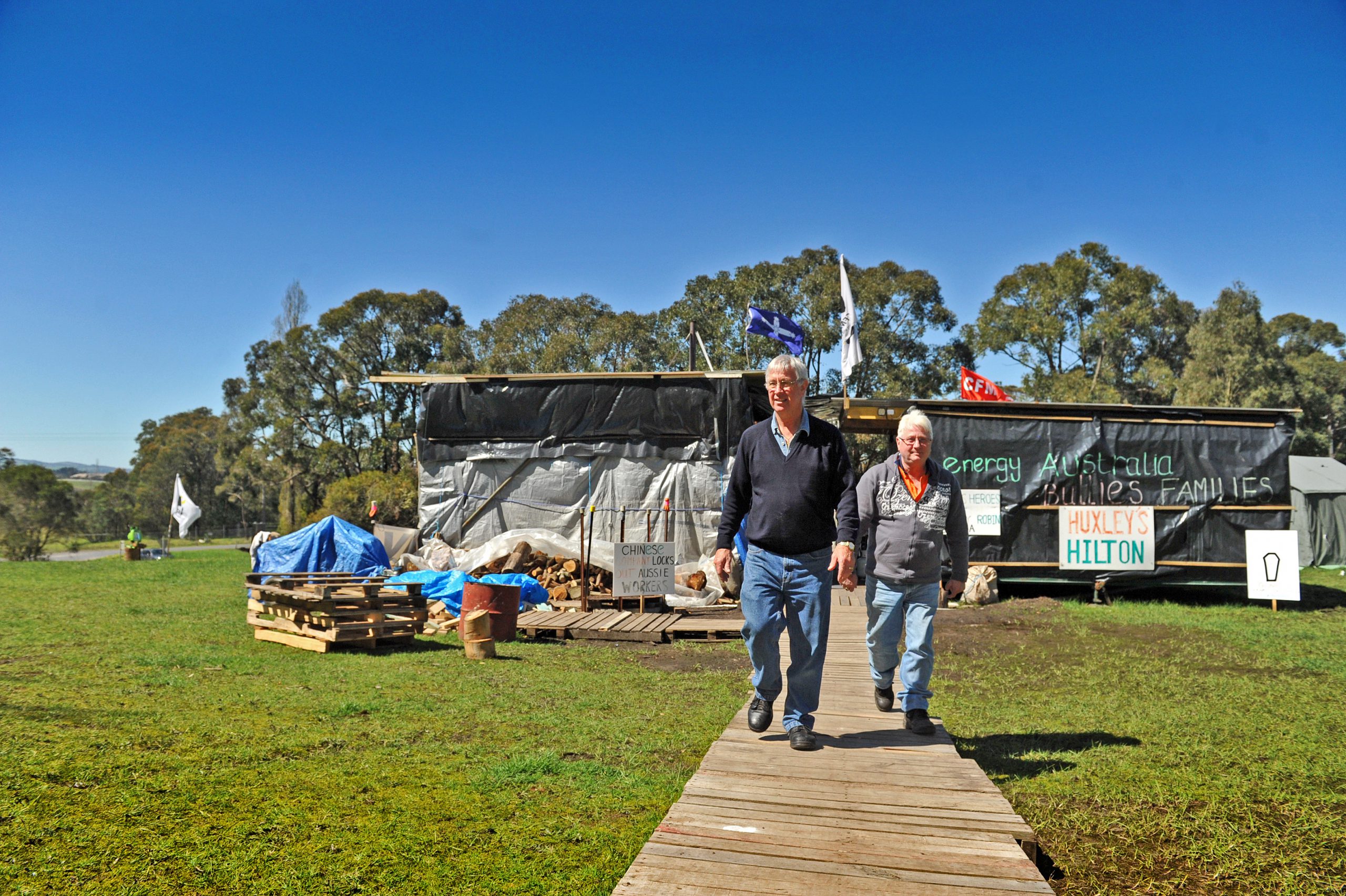 When Yallourn power station operators implemented power generation bans on 21 June as part of a long running fight over enterprise agreement conditions, the company locked out the 75-strong team. The operators were quick to establish a ‘protest camp’, where they have remained to this day.

Depending on who you talk to, the 75 locked out Yallourn operators are either the Valley’s union hero underdogs, or a greedy few giving the power workforce a bad name.

Love them or hate them – there’s no denying three months is a long time to be banned from entering your own work site.

“If you’re going to get locked out this long, by God you want to be comfortable,” one worker told The Express in a visit to the operator’s protest camp this week.

Tucked out of the way alongside the road to Yallourn power station’s main entrance, the camp has grown to resemble a five-star scout fort.

“Some people really don’t know what we’ve done here – some people have come here expecting us to be huddled around a 44 gallon fire barrel – no siree, not us,” another worker said.

Through a raft of materials donated by the workers and their supporters, they have rigged together metal sheeting, wood planks, plastic, tarps and scaffolding equipment to produce waterproof and apparently robust sleeping quarters.

Built on top of a layer of pallets (elevating the camp off the site’s wintery bog), a fully equipped and adjoining kitchen comes complete with waste water runoff, tapping into an existing on-site drain.

“The camp started pretty rough, and it took a good six weeks to set up, but that process was a big part of the coping mechanism, having to make this place comfortable in the miserable circumstances,” a worker said.

“I’m sure the company were thinking we were going to burn out and ask for our jobs back – that was their plan the way we see it – to break our resolve, and had we not had this camp, they probably would have achieved that.”

Manning the camp in line with workplace rosters, five teams of 15 stick to 12-hour rotational shifts, through which their ongoing job description is to keep spirits high.

A motivational sign on the wall reads ‘Now is the time to fight for your work conditions. If you don’t take this opportunity you may be too late’.

A protest song from a Simpsons episode, in which Homer’s nuclear power plant colleagues go on strike, has become the camp’s unofficial theme song.

“So we’ll march day and night by the big cooling tower; they have the plant, but we have the power,” Lisa sings in the episode, a line one Yallourn worker said was “fitting”.

By day, Yallourn’s southern most cooling tower stands visible over the camp; at night, the audible drone of the power station, monotonously grinds on. While not a ‘dry camp’ per se, drinking is kept to moderation, and the only other universal camp rule is to ‘clean up after yourself’.

“Blokes can get pretty stroppy out here sometimes, so it’s really in your interest to clean up after yourself,” an etiquette-conscious worker said.

Despite the majority of workers having personally endured the infamous industrial dispute at Yallourn in 2000, in which workers were locked out and amid a workforce overhaul, some feel the current dispute has been more difficult to endure.

“The hurt factor is much more this time round, it felt like the dispute was more about the issues in 2000, but this time, it’s been personal and nasty,” a worker said.

“On the down days when you are questioning everything, it’s important that you are talking to your mates about it to keep it together, it can be easy to fall apart if you’re not careful,” another operator said.

“It’s been really hard for my missus seeing me drive off to work everyday without pay – she supports me 100 per cent, but it is hard for her to understand why it can be so hard to reach an agreement,” a younger worker said, new to the unionised landscape of the power industry. With enterprise bargaining negotiations between the Construction Forestry Energy and Mining Union and Yallourn owner operator EnergyAustralia ongoing behind closed doors, the workers wonder what it will be like to re-enter the workforce, where their support has been strongly divided.

“The longer you’re out here the longer the anger builds up, things can fester in these situations – it will be interesting to see if any of the relationships inside will mend after this.”