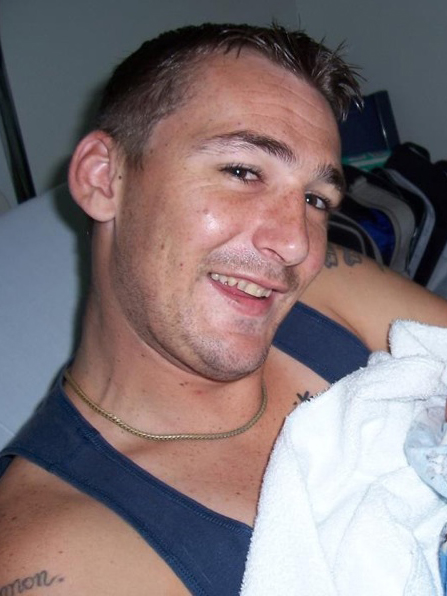 A court has heard Wayne Glenn Bayley’s sister watched him die as she attempted to stop his bleeding in the early hours of 22 December last year.

Kylie Marie Stone’s account of the events leading up to her brother’s death triggered an emotional response from Mr Bayley’s family in Latrobe Valley Magistrates court yesterday as part of a four-day committal hearing for the man charged with his murder, 34 year-old William Scriven.

The hearing is expected to conclude today after appearances from 22 witnesses, among them teenagers who saw the events leading up to Mr Bayley’s death in Traralgon’s Thexton Street.

Mr Scriven’s neighbour, Michael Anthony Hill, told the court on Monday of a physical altercation the pair had on 21 December, hours before 32 year-old Mr Bayley’s death.

The court heard neighbours knew Scriven as ‘Jimmy’, not William.

Mr Hill told the court a verbal neighbourhood dispute had escalated into a physical altercation and ended in a two-minute stand-off on the nature strip with Mr Hill holding a baseball bat, Scriven carrying a knife and a metal pipe and Scriven’s partner carrying two knives, before they retreated.

Scriven was arrested by police.

Mr Hill’s partner Donna Anne Kavanagh told the court Scriven had threatened the pair before being taken away by police, saying “don’t sleep tonight dogs, I’m going to come back and kill you”.

The court heard after the incident, Mr Hill and Ms Kavanagh had gone to Ms Stone’s for drinks, where Mr Bayley also was.

Mr Hill told the court he knew it was likely Scriven would be held by police for about four hours and made sure he was home in time for Scriven’s return to “protect his family” because of what the accused had said.

The court heard this week a group of people, including Mr Hill, Ms Kavanagh, Ms Stone and Mr Bayley, made their way to Scriven’s Thexton Street home upon his return.

Mr Hill denied suggestions from defence lawyer John Kelly that he had gotten together with the group “determined to fix him (Scriven) up”, rather they were there to “make peace”.

“I wasn’t there to assault Jimmy,” Mr Hill said.

“It was punch for punch, we thought, but we didn’t know he (Scriven) had a knife in his hands,” Mr Hill said.

A teenage witness told the court the adults were “counting down the hours” Scriven was locked up, but denied they had gone looking for a fight when he returned.

“I thought we were going to make peace, but that happened,” the witness said.

Another teenage witness said she “didn’t really think there was going to be an argument”. She stood next door to Scriven’s property when the fight broke out.

She told the court Scriven’s sleeve was covering his hand during the fight and he punched Mr Bayley three times in the stomach.

Mr Kelly asked the witness whether she had said there were three punches because she had heard Mr Bayley sustained three stab wounds.

The witness said after Mr Bayley had fallen to the ground Scriven ran into his house and then after police arrived, “opened the door a bit, poked his head out and laughed”.

Mr Kelly asked Ms Stone yesterday, why at one point during the fight when Scriven was on the ground being punched by Mr Bayley, she or any of the other bystanders did not intervene.

She said at the gathering at her house prior to her brother’s death, there was no discussion about the earlier incident between Mr Hill and Scriven.

“We talked about Christmas,” she said.

“Wayne was excited because he’d bought his kids presents for Christmas.”

Ms Stone recalled the moments after her brother had fallen in the fight.

“I was stopping my brother from bleeding at that time. He died right in front of me,” she said.

The court heard yesterday, a statistical analysis will now be conducted on the knife involved. Forensic biologist Kate Outteridge told the court the handle of the knife had DNA from at least three people and Mr Bayley and Scriven could not be excluded.