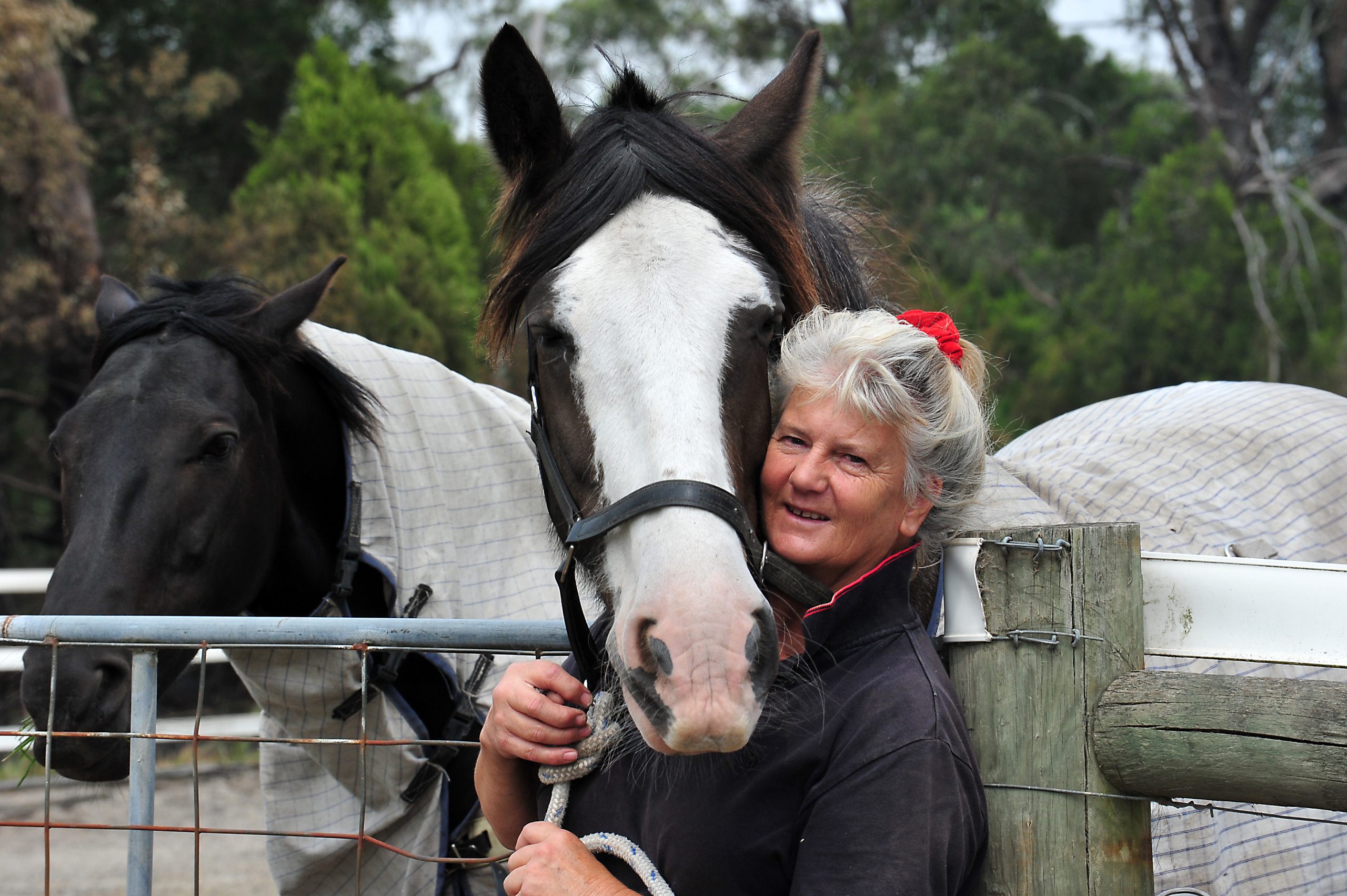 From early that morning Gwyn had a “bad feeling”.

“I kept looking at the sky and thinking I don’t like this, this is not looking good,” Gwyn said.

“The Morwell Pony Club were running a bit of a rally here, because we’ve got the undercover riding area.

“Of course the wind was just getting stronger and stronger and about 10.30am I said, ‘you really need to go home’.”

Gwyn went to her nearby property on Paul Street to check on horses there, just as a water bomb hit Latrobe Road.

“The wind changed and the fire just went straight across to the corner and I saw a big heap of flame go up.”

Gwyn realised Old Melbourne Road would be in the direct path of the blaze.

“I just can’t believe how fast it was.

“In the period of time it took for us to drive from Paul Street, about two or three minutes, it had already got a hold here.

“It was just like a fireball going through pine trees.”

Gwyn and partner Ken Evans made the decision to stay and defend their property and with the unexpected arrival of friends with horse floats, they were able to transport all the horses to Paul Street.

Back at home, two CFA tankers arrived, but the property had lost town water.

“We needed it desperately,” Gwyn said.

“We were fighting for our lives and our properties here.”

Gwyn said the property’s saving grace was an old 10,000 gallon tank she kept operational for emergencies, water from which was used to fill the CFA tankers.

“We probably would have burnt (otherwise). It was the only saving thing,” she said.

Between the CFA, a neighbour’s fire pump and a small spray unit, the fire was kept well away from Gwyn’s home.

“The big pine trees along the boundary caught fire and they came with the helicopters and waterbombed that and if they hadn’t, we would not be here today.”

As Gwyn and Ken worked to put out spot fires on Sunday night, they looked over at the blaze which had made its way through pine plantation to the Maryvale Mill boundary.

“It was just a red ball in the sky and I thought ‘that must be the closest thing to hell you’d come to on earth’.”

In the past few days, Gwyn and Ken have erected temporary electric fences to replace those lost and have returned six horses to the Old Melbourne Road property.

Gwyn said one horse was injured as a result of being in a paddock with so many others at Paul Street, and another, ‘Harry’, was struggling emotionally.

“It hasn’t been the most pleasant couple of days in my life but I’m very grateful we didn’t lose any property,” she said.

“We were on the edge of the front. Thank heavens for that, because it was diabolical enough.”

A GIPPSLAND Water spokesperson said the fire activity at the weekend presented a number of challenges, including power interruptions and road closures preventing safe access to some sites.

“Gippsland Water appreciate the inconvenience and stress these events can cause, and thanks customers for their patience, however, the demand on water is so great during events like these that it is just not possible to guarantee continuity of mains supplied water.

“Gippsland Water would also like to thank that the CFA and others who worked to prevent a number of Gippsland Water assets being lost in the fires which are still burning in our community.”

The spokesperson said with the summer season far from over and the prospect that there may be other fire events, the organisation was reinforcing the message that all water corporations issued: ‘would your fire plan work if mains water was lost’?