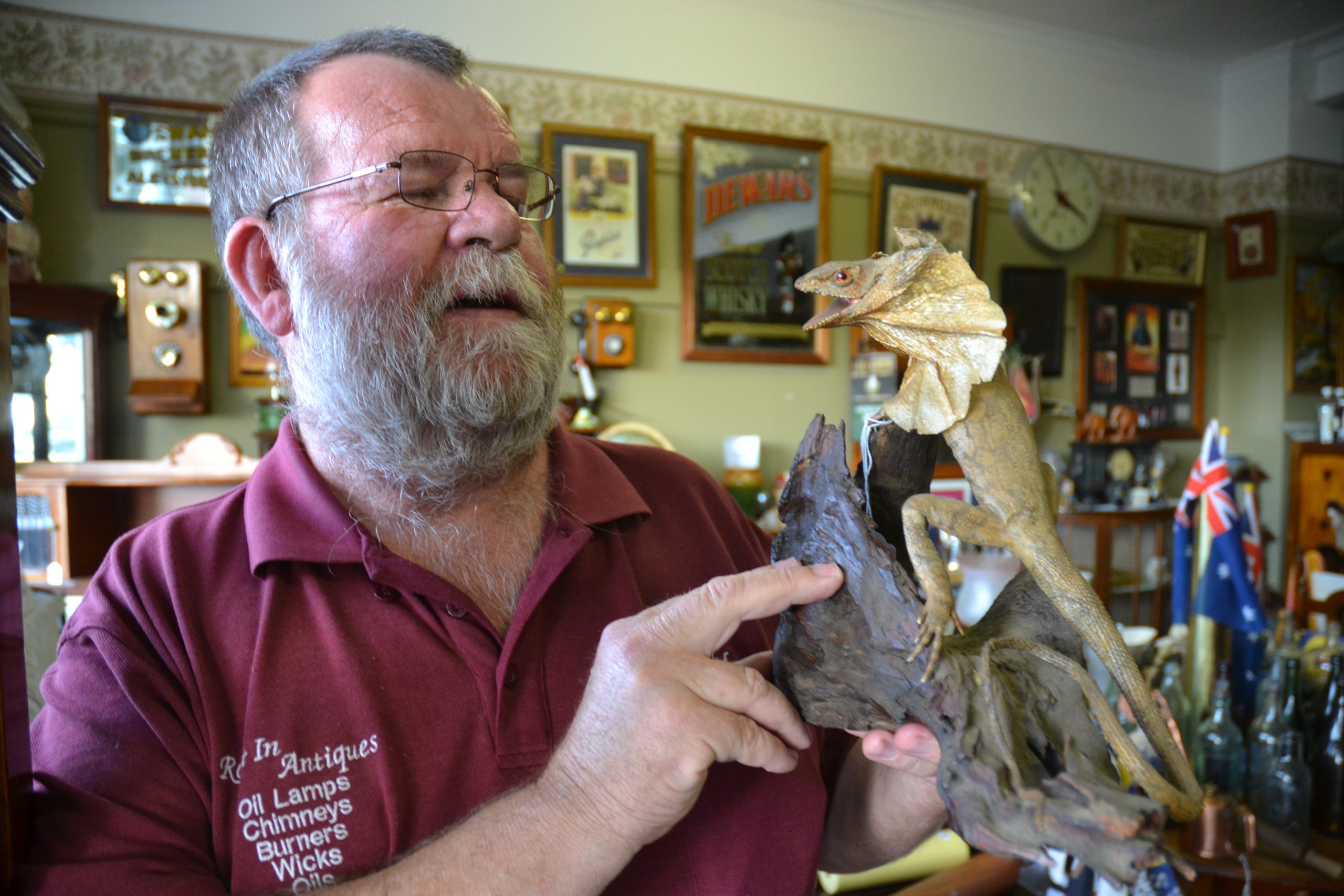 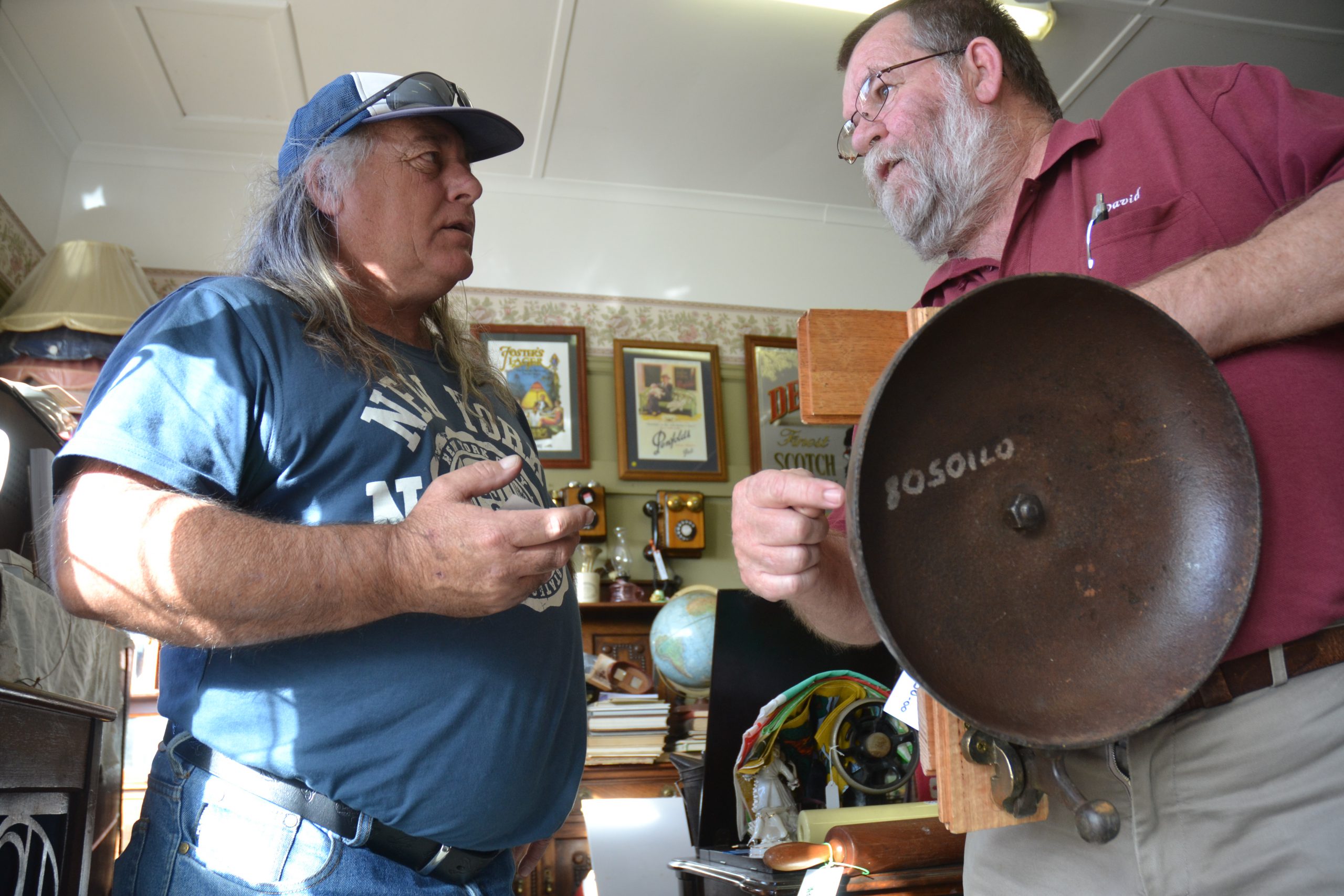 Where does an eccentric collector of Moe soft drink bottles go to expand their collection?

With a passion for most things classic and quirky, Moe antique and collectable picker David King may just be the man.

“Once you start wheeling and dealing and trading, you’re hooked,” David said from his Moe shop front, packed to the hilt with relics from the past.

“It’s the whole process of searching, finding and selling those unique items on to people who really treasure them which is the pay off… you don’t do it for the money.”

When the aforementioned bottle collector visited David’s shop asking after the locally made ‘PEVS’ bottles, David entered the request into his ‘wish list’ book, which features a range of items he’s been asked to keep an eye out for by customers.

“I’ve had one guy come in asking for a drive-in speaker to set up in his garage where he was setting up a big screen – he wanted to park the car watch movies at home like the real thing – he just loved the old drive-ins that much,” he said.

David’s love for picking began at the age of 11, through a childhood friend whose father ran a large antique business in Bowral, New South Wales.

But it was after the purchase of his first MG car in the 1970s, for which he began to source original accessories and add on collectables, that his obsession grew to become a sideline-career.

During The Express’ visit to David’s Moe store, a railway enthusiast – Stephen Muir of Stratford – entered, and after 10 minutes of quiet browsing, was taken aback by an original Melbourne green tramway car bell, circa 1940s.

While David believes garage sales “are too time consuming”, most of his time is spent souring for one-off items at auctions, swap meets and deceased estates.

“A lot of people throw good stuff away – they ring you to come have a look after they’ve already thrown out the stuff that’s worth anything to people,” David said.

He doesn’t deal in jewellery, coins, stamps or swap cards – there’s too many “duds” (especially in jewellery).

“When you’re a licensed dealer, they last thing you want is to be in possession of a stolen stamp collection, that stuff is way to complicated to manage,” David said.

More increasingly of late, David’s picking has gravitated towards the ‘bar and car’ market, the so-called ‘brewiana’ and ‘garageania’ items, such as beer signs and branded oil cans.

“The lady has the house and the man has the shed – so they are stocking that up with signs, beer taps or whatever; that’s where the market has been going recently,” he said.

“We live in the ‘Ikea’ period, where people buy cheap furniture because they are always on the move; they are less likely to settle down, and don’t want to tie up their capital in stuff.

“Expensive furniture is not what they need, so traditional antiques are in a low cycle right now.”

However, like all cycles, David said the market would change again within the decade.

“The 30 year-olds now, when they’ve turned 40, will start to appreciate the stuff their parents had – just like the way we’ve seen the resurgence in vinyl LP records,” he said.

“When you’ve got ALDI and Kmart selling record players, you know that something’s well and truly ‘back’.”

Separating the ‘cheap and nasties’ from the genuine items can also be a challenge.

“I had one lady come in with a money box she said was her grandmother’s and was 100 years old – but it had a Phillips head screw in the bottom and a rubber cap in it – it would’ve been lucky to be 20 years old, and she thought it was worth hundreds.”

David said the real challenge came when items made in China and Pakistan – particular brass wares – were brought in after having been intentionally left out in the garden to age.

“Brass and new brass are usually totally different things, but sometimes it’s hard because without markings, you’ve really got to put a fine eye over some things,” David said.

When asked to list off some of his greatest finds, David looked around his shop front in hesitation.

“Everything you find has got something exciting about it – especially something with history and a story behind it, which is so nice to hear,” he said.

And as for David’s mission to find the PEVS bottles?

“I had someone come in and drop of a crate of old lemonade bottles not long ago – and right there in the crate were a couple of bottles with an old Moe number on the back ‘Moe-358’,” he said.

“Now he wants me to find some more, this time with screw plugs in the top.”