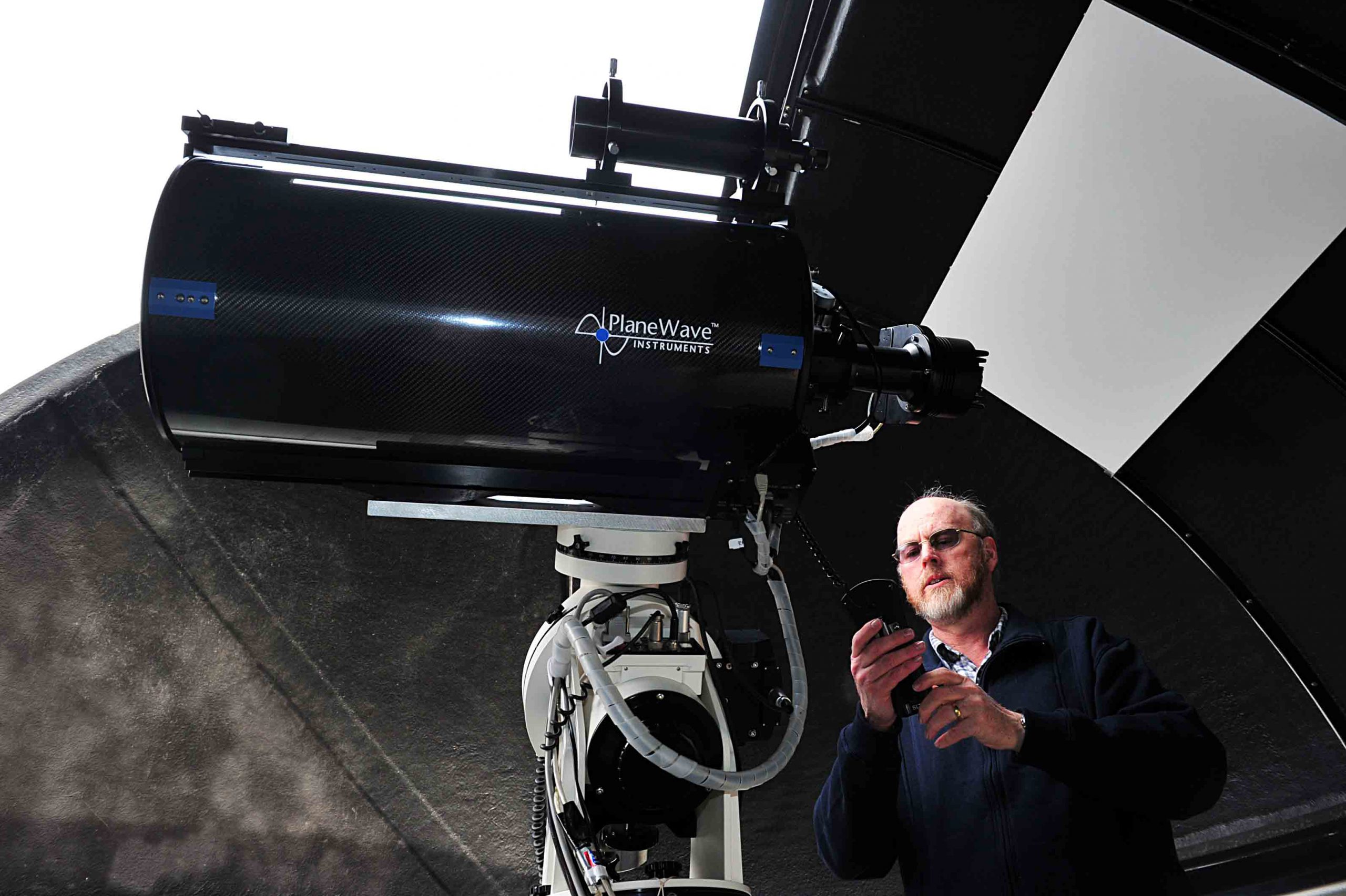 Next time you feel overwhelmed by wet and overcast conditions, spare a thought for Latrobe Valley’s avid backyard astronomers, like Churchill’s Chris Stockdale.

“I’ve only had a chance to use this thing 10 nights since I put it in, that was before the weather turned to crap,” Chris said.

Having recently upgraded his very own backyard observatory, Chris is clearly pretty excited about his new bit of space kit.

“It has been dicey weather-wise this year; it can look fine one minute then the next thing showers are there and you just get rained on,” he said.

A power industry computer whiz by day, after sunset Chris becomes a data-cruncher of another kind; recording the light intensities of stars and other deep space phenomena, largely invisible to the naked eye.

It’s a lifelong passion for the night sky sparked when the imaginations of most were captured by the NASA 1969 moon landing.

“Around that time Comet Bennet was pretty visible in the sky, so between that and men walking on the moon it was hard not to get into it,” Chris said.

Taking part in a Latrobe Valley Astronomical Society night viewing of Mars in 1971, he soon after signed up and purchased a two-inch telescope, and is now one of the club’s longest-standing members.

His two incher has since been upscaled numerous times (he currently has a 12.5 inch scope turreted in the observatory) and his appreciation of the night sky has expanded to encompass space photography and participation in global data collection projects.

For the last ten years Chris has been involved in a project recording the movements of Jupiter’s moons, used to predict the location and trajectory of the satellites “so a future spacecraft doesn’t crash into little pieces”.

“What we were doing with Jupiter is measuring the precise time that Jupiter’s four moons go in and out of Jupiter’s shadow, that allows us to pin-point exactly where the moons actually are,” Chris said.

“I’ve been working with a few blokes around the world, along with (fellow backyard astronomer) Peter Nelson in Ellinbank on that project – sometimes he would have clear line of sight and you wouldn’t, and vice-versa.

“Over the 10 years I’ve ended up with about 140 or so nights where I have actually observed the reappearance or disappearance of these satellites.

“The whole project has been able to narrow the room for error in the position from 600 kilometres down to 15 to 20 kilometres.”

While the repetitive data collection can be laborious, every patient and dedicated astronomer also has their ‘wow’ moments, Chris recalled a particular gamma ray burst among his favourites.

“The most exciting event was a fairly early morning when I managed to record a gamma ray burst, it was something that happened in a distant galaxy,” Chris recalled.

“I recorded the light curve fading off, and that became the subject of a paper with (observations from) three or four other people, I was sort of hunting it down and recording this incredibly faint dot on this image that is full of stars.”

Stargazing from his first homemade observatory constructed in 1992, which required him to manually rotate the dome to shift the telescope’s perspective, Chris now enjoys the luxury of a motorised observatory, purchased from a Queensland astronomer stepping out of the hobby.

“The equipment and technology has come ahead leaps and bounds and costs have come down dramatically in the last 20 years, so it’s become a lot cheaper to do some impressive stuff at home,” he said.

Chris counts a specialised telescope, capable of observing particular frequencies of sunlight by filtering everything but hydrogen alpha light, among his most exciting space toys.

“It lets you look at an absolutely miniscule amount of light that comes from the sun’s atmosphere and what you can see is just gobsmacking,” Chris said.

“Normally you can see sun spots and a bit of detail here and there, but once you get these special filters that cut out a massive percentage of light and focus just on the hydrogen, you can actually see the gas rising and falling down on the surface of the sun.

“The first time I saw that was up there with the memories I have of looking up at Saturn for the first time and thinking ‘wow, I can actually see the rings’. That actually was pretty mind-blowing when I was 10 years old.”

It’s such recollections which remind Chris of the sheer wonder and awe of space, something he said the avid astronomer could take for granted at times.

“Sometimes you do get lost in the data collection, and forget to put the eyepiece in and just look freely at what’s out there, but when you do, you think, ‘wow, I should really do this more often because it’s really quite enjoyable just sitting there and taking in the view’.

“It’s just like people at a party taking photos all time, but they never actually put the camera down and just take the event in.”

Formed in 1954, the Latrobe Valley Astronomical Society is scanning the landscape for its next generation of star gazers.

President John Sunderland said with an ageing membership base, it was time to get some fresh sets of eyes into the group, and share the intergalatic passion around.

“The interest in astronomy is just as strong as ever, however nowadays the trend is to just jump online and join an internet forum,” Mr Sunderland said.

“But there’s much to be learnt in person from an experienced astronomer, and we have quite a few of them here in the Valley and Gippsland.”

Dismissing perceptions the Larobe Valley’s power stations rendered local skies too smoggy for astronomy, Mr Sunderland said you were much worse off in Melbourne.

“The Latrobe Valley sky is actually heaps clearer than the city, if you are talking about pollution,” he said.

Mr Sunderland said the group would soon hold a short course in astronomy, spread over three or four nights, for people interested in taking a telesope to the skies.