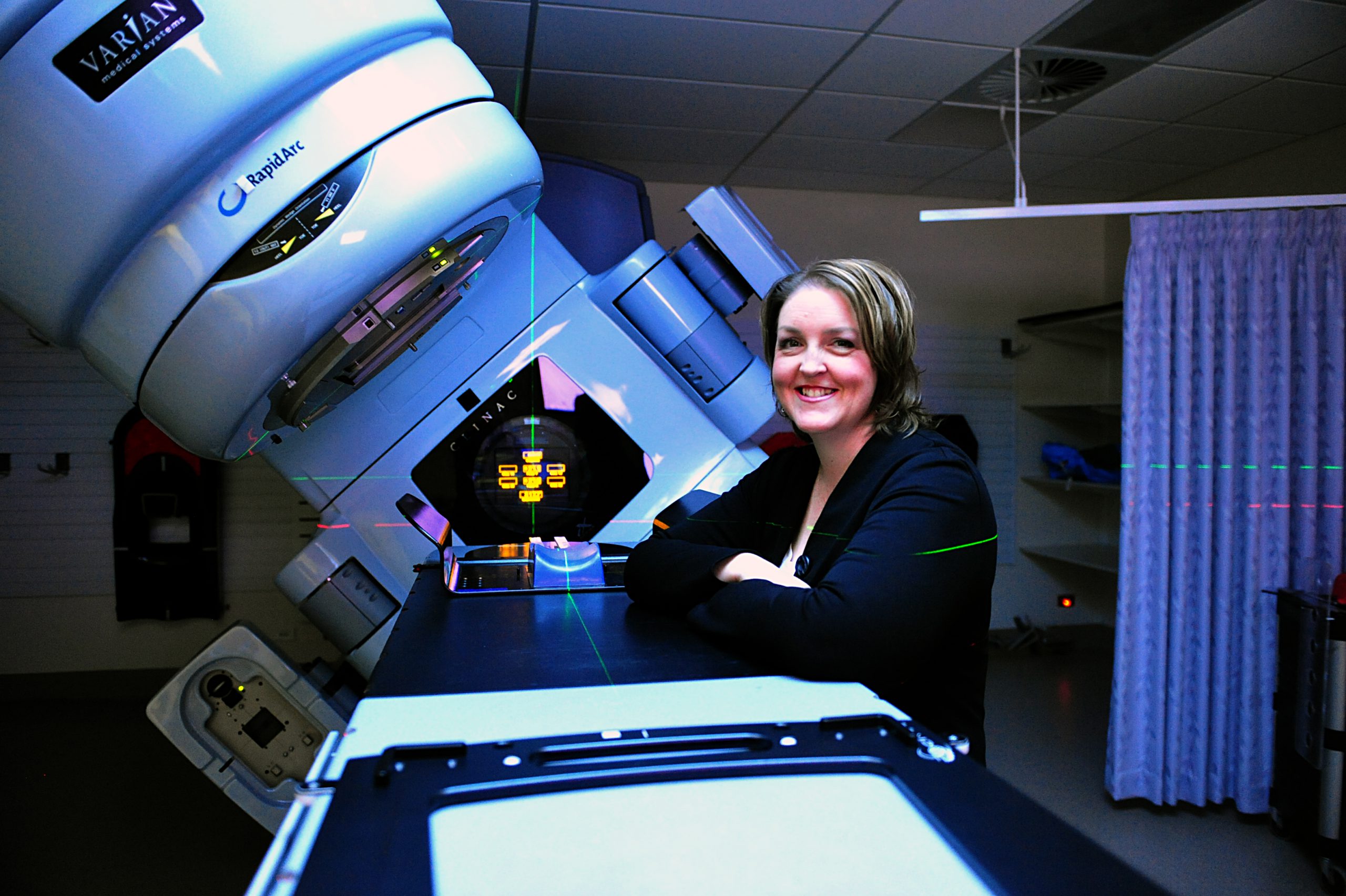 Kellie O’Callaghan walks into one of the Gippsland Cancer Care Centre’s radiotherapy rooms.

“The Star Wars room,” she says affectionately, referring to the illuminated image of the night sky on the ceiling above the linear accelerator.

Staff are giving us the guided tour of the cancer centre as the opening of its extension fast approaches.

As chair of the Latrobe Regional Hospital board, it will be a big milestone for Kellie. And it coincides with a major personal milestone.

It’s been one year since the breast cancer diagnosis that thrust her into a double life – chair of the board and patient in her own hospital.

The linear accelerator is moving.

The lights are on and a cancer care centre manager is explaining the incredibly technical process of pinpointing a particular part of the body for treatment.

At our request Kellie is posing for a photo now.

She’s smiling in front of the linear accelerator – an imposing machine, even for someone who hasn’t lain beneath it for cancer treatment.

This is no small thing. This is brave.

“I was blind-sighted a bit,” she said of her diagnosis.

“You don’t go to have a mammogram thinking that someone’s going to phone you a few weeks later and say ‘by the way you’ve got breast cancer’.”

Kellie’s breast cancer was detected in her first mammogram conducted by BreastScreen.

The test was part of a general health check associated with a rare chronic medical condition Kellie lives with known as Wegener’s granulomatosis, in which blood vessels become inflamed, leading to damage in major organs of the body.

Surgery to remove the cancer, recovery and five weeks of radiotherapy followed, where Kellie gained a first-hand understanding of the value of cancer treatment close to home.

“You have a sense that you are within your own community,” Kellie said.

“When you turn up it’s not just ‘hi, we’re here to talk about cancer today’, someone’s going to say ‘did you see this on the news?’ or ‘did you notice this was happening?’ and what happened in the local footy.”

“There’s something that’s quite supportive in that.”

Kellie then found herself navigating the strange shift from a board chair to patient.

“I had David Chan as surgeon, he’s exceptional, and I recall sitting there asking him questions that I know I know the answers to.

“But I automatically went into patient mode and started asking all these questions like when will the surgery be and what were the wait lists like.

“I already know that. But it’s a very different shift when you’re dealing with the circumstances.”

Having an uncommon pathway to the board in 2005, through the hospital’s Community Advisory Committee, Kellie believed she already had a consumer perspective of health services.

However, undergoing her own treatment for cancer gave her an understanding of the “finite detail of what happens every day”.

“You’re sitting and you’re talking to other patients, so you’re understanding what their experience is.

“You can’t help but observe the staff. You’re looking at how busy they are and all the things they’re having to do.

“But at the end of the day, the reality of having to lay under the linear accelerator every morning and have your radiation treatment, you know that you’re there because you’re a cancer patient.

“There’s a whole other level of vulnerability about it.”

Kellie said she settled herself into a routine.

But there were still bad days.

“Towards the end of my treatment, I was… messy is probably the best way to describe it. I had some side-effects from the other condition.

“The staff are so experienced in dealing with it, they’ve anticipated it. They knew what a good day looked like, they knew a bad day.

“They also knew when to be supportive and when to just leave you be.

“I could literally walk in there and be the patient in the morning and then burst into tears and have a bad day because I just wasn’t feeling well, but then I could see those same people later on in a meeting, or wandering around and it’s not different.

“They’re very accepting of what it is like to be a patient in their service and that’s probably the most important thing.”

Kellie said she felt a sense of responsibility to the community to provide the best possible health service.

But there was an internal struggle between what she wanted to provide and the reality of “finite dollars attached to health services”.

“As a person, you would want to provide every service to every person who walks to this door and wants to have it now.

“I’ve had to pull myself up and say you’ve got to make a board decision here, not a patient decision. Sometimes that means making hard decisions.

“I don’t always like what the outcome’s going to be of that decision. It’s not always going to sit comfortably, but if it is the best possible decision we can make at the time, then I’ll make that call.”

Twelve months on from her diagnosis and Kellie’s treatments have so far been successful.

At the time, she was 41 years old, with no immediate history of breast cancer in her family and no obvious lump.

“If I didn’t have a mammogram, I wouldn’t have known I was walking around with cancer. It’s really that simple,” she said.

“Doing a self exam is important because it can see any changes. But the reality of a mammogram is it can see the stuff inside that we can’t.

“I just think that women need to overcome the fear of the test. Go and get it done.

“The reality is, you’re better off to know.”