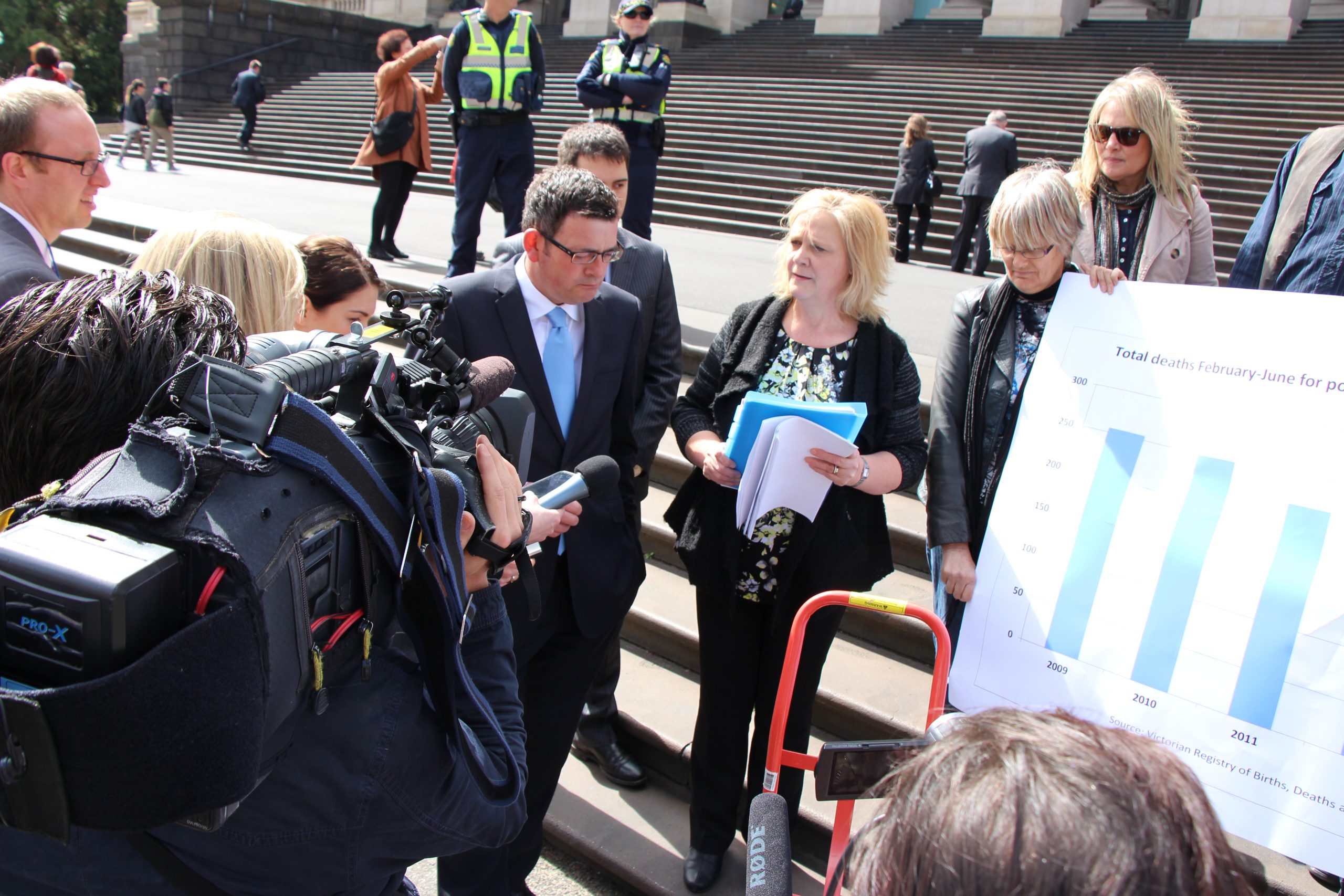 Forty Latrobe Valley residents rallied on the steps of the State Parliament and in the lower house on Wednesda, calling for increased death rates during the Hazelwood mine fire to be investigated.

Campaigning for a coroner’s inquest and for the Hazelwood Mine Fire Inquiry to be reopened, Voices of the Valley president Wendy Farmer and members travelled to Spring Street and the coroner’s office, presenting State Opposition leader Daniel Andrews and the coroner with statistics released late last week.

The information was handed to Mr Andrews because the VOTV believed Premier Denis Napthine has ignored the figures.

Research released by Queensland University of Technology Associate Professor Adrian Barnett last week showed there was an 89 per cent chance the 15 per cent death rate was higher in the period of the fire in Traralgon, Morwell, Moe and Churchill.

Mrs Farmer was removed from Parliament after responding to allegations by Dr Napthine there had been a death decrease of 19 per cent, taken from a smaller sample of data.

“I just said ‘liar, have a look at the whole of the Latrobe Valley, people are dying’,” Mrs Farmer said.

She believed Dr Napthine was refusing to acknowledge the problem, which had been recognised by the World Health Organisation.

“We know the WHO know there’s a problem, that smoke exposure for 45 days will kill and will damage our health,” Mrs Farmer said.

“I think (Dr Napthine) would wish that we would just disappear and we’re not going to, we want the truth to be told, he has the truth in front of him.”

Peter Marshall of the United Firefighters’ Union joined the group in Parliament, insisting the inquiry be reopened.

“The board of inquiry never really got to the bottom of why the limit of 30 parts per million was changed to 70ppm and why the community weren’t informed about that and most importantly why the firefighters were ordered not to communicate that to the public,” Mr Marshall said.

“Those are matters of public interest especially in the context of recent revelations of the increased number of fatalities.”