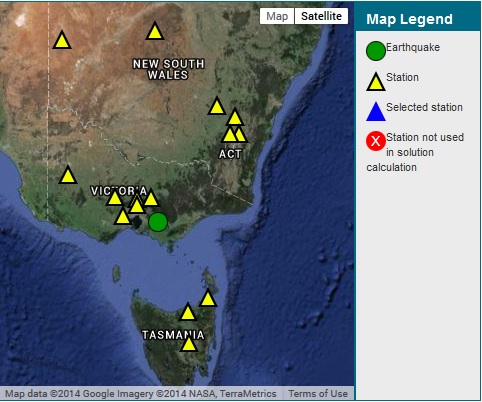 A 3.4 magnitude earthquake recorded in Korumburra early yesterday morning was felt as far away as Melbourne suburbia, however it only managed to shake the odd foundation in the Latrobe Valley.

According to Geoscience Australia, the nine kilometre deep rumble shook objects off tables more than 100kms away in the eastern suburbs, however stopped short of causing any damage.

While the quake was recorded in seismographic equipment stationed as far away as Tasmania and north-west New South Wales, anecdotal reports from the Valley were light on the ground.

“There really hasn’t been a whole lot of reports in your area at all,” seismologist Emma Mathews said.

“It does depend in the geology and where you are in relation to the epicentre, and what kind of foundations or substrate your house is on which determine the level it will be felt at.”

The Geoscience website estimated residents up to 34 kilometres away from the epicentre may have been able to feel the quake, putting Yarragon and Mirboo North within the probable ‘feel’ zone.

Ms Mathews said the direction of quake movement could also influence which areas would feel the quake.

Express Facebook follower Bronwyn Rose said she was woken by the quake in Leongatha.

“Thought I was having a seizure or something, didn’t realise it was an earthquake until I read it on Facebook,” Ms Rose said.

Caused by a release of stress built up in fissures and cracks in earth’s crust, Ms Mathews said the ‘intraplate’ earthquake was a symptom of the Australian tectonic plate slowly moving north.