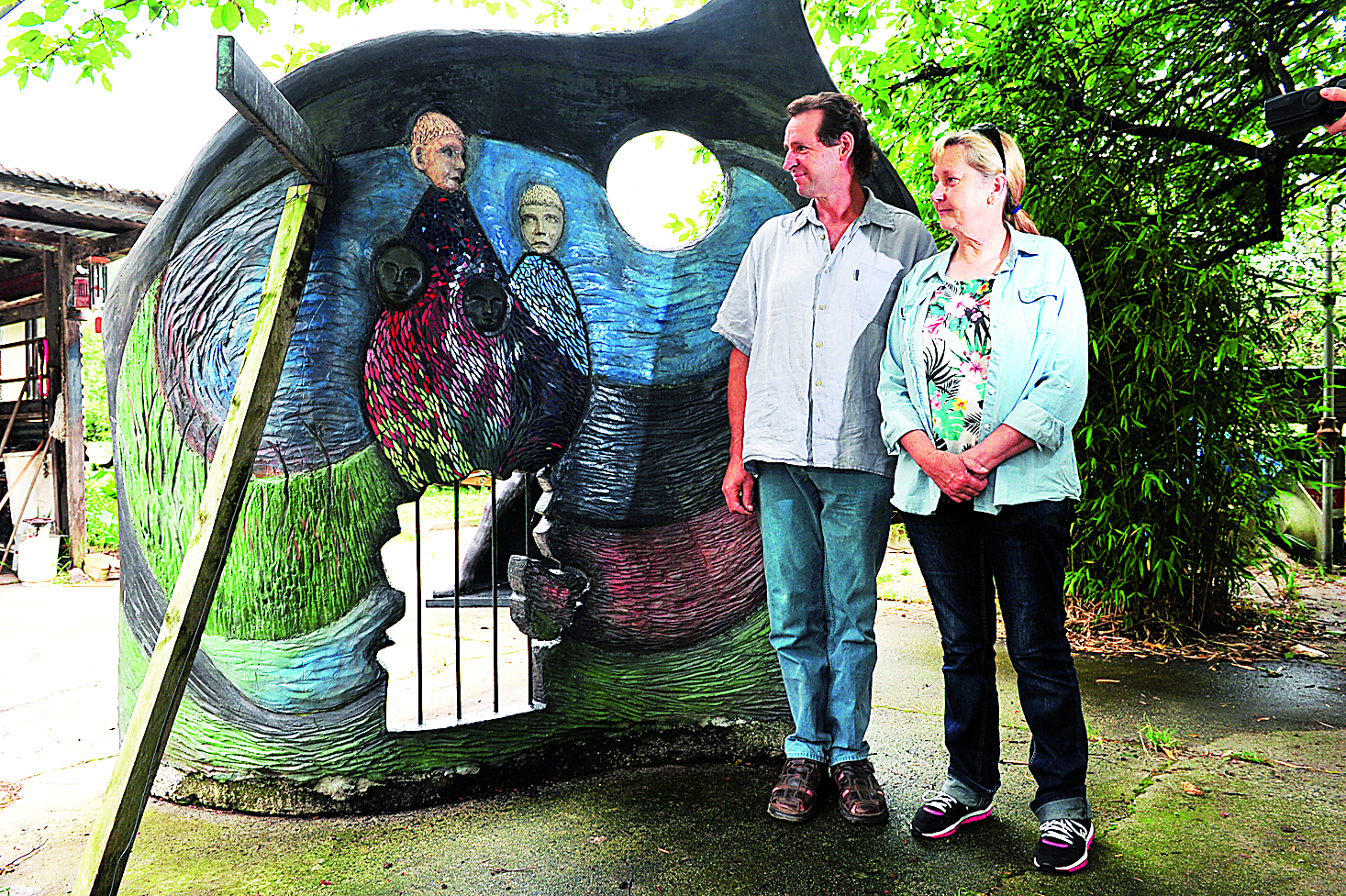 It is not what one imagines when they think about war memorials.

The abstract Australia-shaped sculpture in Boolarra artist Paul Jesse’s backyard is in stark contrast to the bronze-cast “fallen mate” or concrete cenotaph seen in many country towns.

But the town of Churchill, in recognition of its fallen soldiers and its 50th birthday will see the service memorial erected on a concrete plinth at its town plaza and used in this year’s Anzac Day Ceremony.

“I’m sure a few people will be a bit perplexed and not understand what it’s about, and I guess that’s something that can be learned overtime,” Mr Jesse said.

“It doesn’t have to be immediately understood.”

He said the sculpture was different from most war memorial sculptures because it explored the reasons why people go into service or war.

“It’s not just about loss of life, it’s about what trauma does,” Mr Jesse said.

One side of the sculpture is colourful and optimistic with themes of home, family, community and the future.

But the line work also invites the viewer to see the back-side of the sculpture, which is black and foreboding.

“These lines can also be seen as a range of connectors by the two sides, representing a flow of thoughts, love, fear, concern and dreams,” Mr Jesse said.

Churchill and District Community Association president Margaret Guthrie said unlike many country towns, Churchill had never had a war memorial and received a grant from the Department of Veterans’ Affairs six years ago to commission a sculpture with Latrobe City Council’s support.

Ms Guthrie said the association decided the sculpture needed to recognise more than just the war effort, but service and volunteerism, considering Churchill was only founded in 1965.

“How can you have a monument to the citizens of Churchill who lost their lives in the First World War and Second World War, when Churchill wasn’t there?” she said.

Ms Guthrie said she was hoped people come and look at the piece and reflect, not with the expectation that they’re going to see a traditional war memorial.

“It’s meant to be interpreted in different ways, we don’t want to have a fixed concept behind it,” she said.

Morwell RSL president Bruce Jeffrey admitted he and other members were shocked when they first saw the sculpture, but had come to understand it.

Mr Jeffrey said the RSL did not have a policy about what constituted a war memorial and it was up to the people of Churchill to decide what they wanted.

He said he looked forward to conducting the Anzac Day Ceremony in front of the sculpture.

“Some people could be shocked and some might like it. I’m a lover of art and I’ve got nothing against the memorial, personally. It’s up to each individual,” he said.

Do you like Boolarra sculptor Paul Jesse’s Churchill Service Memorial? Why or why not? Leave your response on The Express’ Facebook page.