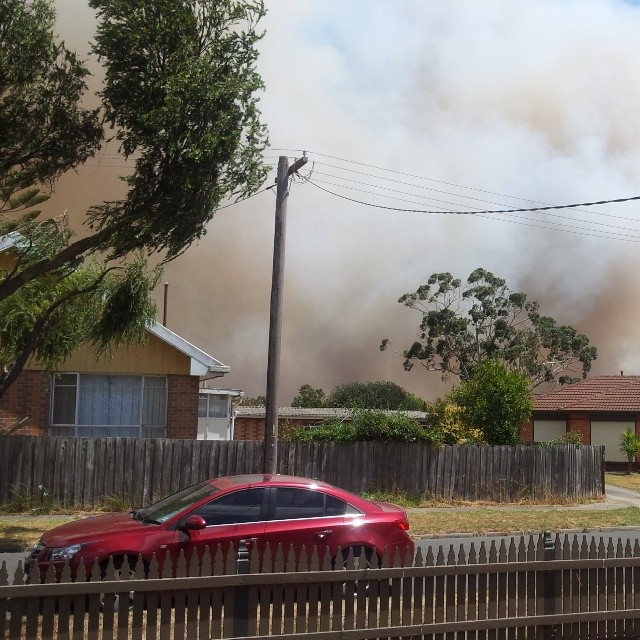 This day one year ago there was an ominous mood among firefighters arriving for duty at Hernes Oak containment lines.

The fire which broke out in ‘suspicious circumstances’ two days earlier had been contained, however difficult terrain and dense bush had kept extinguishment at bay.

Stern predictions the state was about to face its worst fire conditions since Black Saturday were playing on the minds on firies and residents alike.

“The weather we got that day was among some of the most extreme I’ve dealt with on the fire ground in 35 years. Pretty bloody close to the worst,” Yarragon firefighter Geoff Conway said.

Morwell would be reminded only too well of this later that day, in an incredibly close call which has since been largely forgotten in the smokey haze of the Hazelwood mine fire which followed.

Mr Conway had arrived for his 7am shift as division commander to learn the blaze had been knocked down after “popping its head up a few times” over a busy night.

“We knew that if the forecasted weather actually occurred, then we would probably lose the fire. So from the get-go we knew we were under a lot of pressure,” he said.

“I’ve just got to reinforce how incredibly dry it was that year. The tracks we were working on were like talcum powder, there was absolutely no moisture.”

He remembers a relatively uneventful morning as crews prepared for the worst.

“It was really very boring for five or six hours. It looked black, there was no smoke and just a couple of trees on the eastern end of it burning,” Mr Clark said.

But when the north-westerly gusts of up to 80 kilometres per hour hit containment lines late that morning, the dormant blaze “exploded” and the day suddenly got a whole lot less boring.

“Within five or six minutes of the wind picking up, it had all gone to s**t. Before we could get all the trucks out from its path it was gone and was all over us,” Mr Clark said.

“We got hammered and pretty quickly things became about self-preservation. There’s no plan then, you just say to your crews ‘look after your butt and put out whatever you can’.

“We only had 10 tankers to work the eastern face of the fire to black it out before it went to s**t. It was spotting miles ahead of us and we had no hope.”

As calm became chaos, access to the township of Morwell – now under-threat by the reinvigorated fire front – was blocked from the west.

Mr Clark’s crews could only follow its path as the fire front raced south-east, blacking out and waiting for their chance to punch through to the other side.

“We simply couldn’t get through. All the roads were on fire, and it just went straight over the top of us and into the Yallourn open cut.”

Stationed at Yallourn’s south-west perimeter, Mr Conway had no hesitation advising the freeway’s closure, as his attention quickly turned to the threat to the West Field mine.

“The guys in Estate Services (Emergency Response Team) at Yallourn were pretty strung out and were looking for as much help as they could get, so we were pumping a fair bit of gear down there,” Mr Conway said, estimating as many as 20 CFA appliances were sent in.

“There were a couple of points when the Yallourn boys said ‘I don’t think we are going to be able to keep it off the active face’ but by about 6pm the work there had started to ease back.

“But our other dilemma was the fuel loads along the freeway were incredibly heavy and we had some very, very intense fire behaviour moving along there.”

As the north-westerly winds continued to push the blaze along the freeway, fire had already taken root in the Hazelwood mine, and news of a separate fire along the Strzelecki Highway further dashed hopes the Hernes Oaks blaze would attract extra resources.

An automated emergency alert was made to phones across town advising residents of the imminent threat on Morwell’s southern fringe.

Mr Clark recalled vividly the blaze when it took root at the Strzelecki Highway/Princes Freeway intersection, as radio calls to protect Morwell continued to come through.

“It wasn’t travelling that fast by that point, but it just kept burning intensely. Once it got through into native trees and eucalypts it was sending sparks all over the place, which made it extremely hard to do anything,” Mr Clark said.

Committed to a fire which had broken out at the Energy Brix complex, Morwell station officer Gareth McDermott said local resources could only be released to the town’s west in “bits and pieces”.

Appliances were called in from outside the Valley to what had become a full blown ‘asset protection’ fire fight – and Morwell was the ‘asset’.

“The situation changed in the ‘flick of an eye’ that day, it was incredibly complex,” Mr McDermott said.

With firies battling to keep the blaze’s northern flank from wiping out properties near Morwell Recreation Reserve, a major south-westerly wind change came as a mixed blessing.

“We were sort of thrown in the deep end when the wind change hit, which pushed it right up close back to Morwell,” Mr McDermott said.

“But there was a lot of luck at play there; had it been allowed to keep going down the freeway for another five or 10 minutes, (the wind change) would’ve pushed the fire right into some pretty dense residential areas and we would have been in some serious trouble then.”

With the fire licking perilously close to properties as it tracked north-east towards Latrobe Road, Mr Clark’s crews were using all the help they could get.

“We certainly got a lot of help from the public along there, helping us knock down fire as it came to their properties. There were some real difficult access issues, so it was great to get that help from some prepared individuals,” Mr Clark said.

“We had fireballs jumping over the property, it was pretty scary stuff – you’ve got to give it to those firefighters, you have to be pretty gutsy to take these things on,” Latrobe Road resident Charlie Maddaluno said in the days after the blaze tore through his property.

Taking root in plantations along Latrobe Road, the “sound of a roaring freight train” recommenced, as the fire continued to wreak havoc into the evening, consuming hectare upon hectare of forest as it spread towards Maryvale Mill, before slowing overnight.

“It was nearly 2am when I finally caught up with Rob Clark; the poor buggers were just exhausted,” Mr Conway said.

In the week following, before the severity of the Hazelwood mine fire had seized the public’s undivided attention, Federal Member for Gippsland Darren Chester declared Morwell had “dodged a bullet”.

No firefighter this reporter has shared Mr Chester’s comment with has disagreed.

“In terms of career fights, it was nowhere near Black Saturday in terms of impact, but in complexity it was certainly right up there having a major regional township under threat like that,” Mr McDermott said.

“I couldn’t praise any of the crews enough who worked that fire. Ground crews on the day did a sensational job protecting houses on that western side, we only lost three sheds all up.”