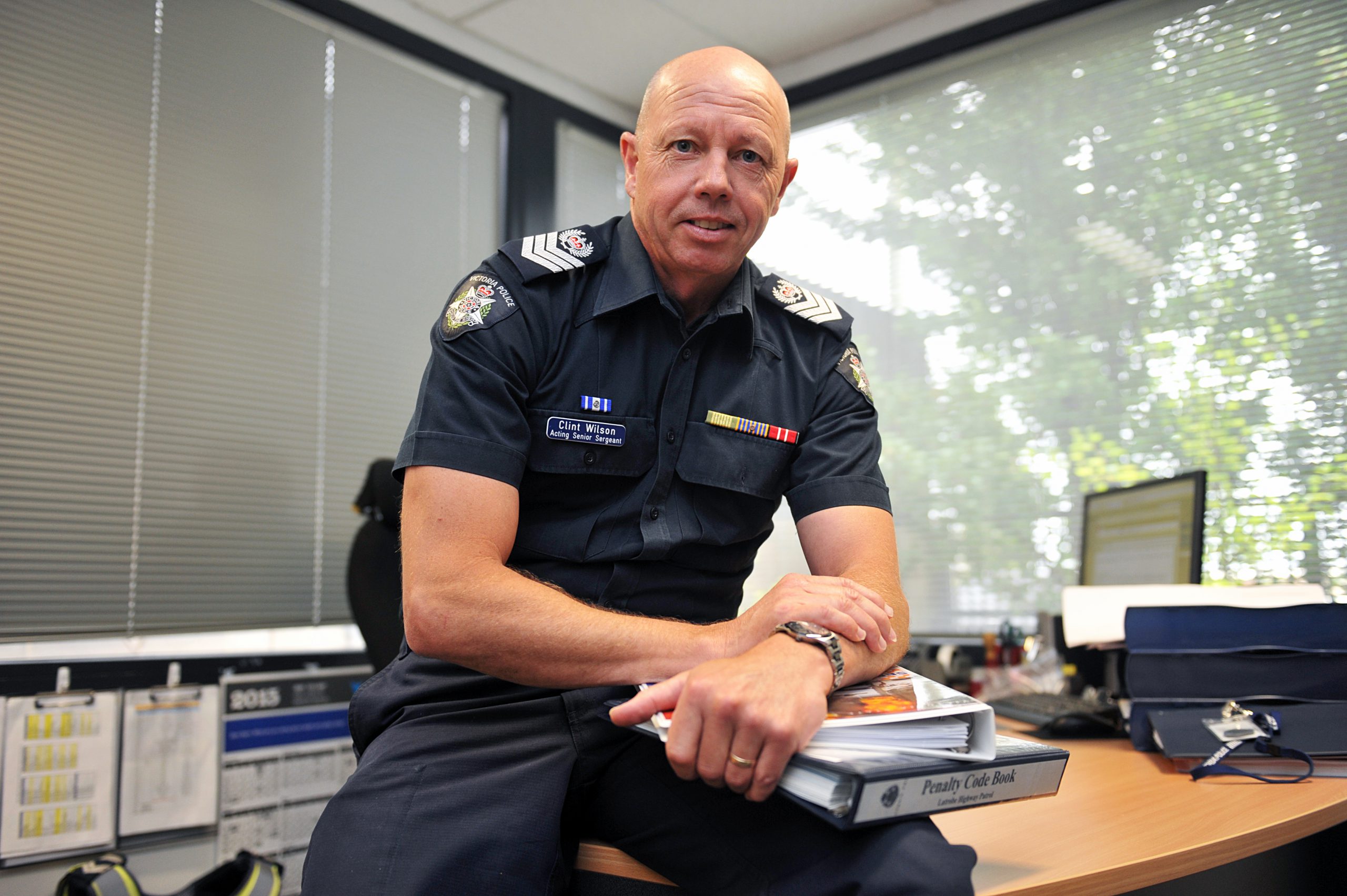 It was with great reflection Senior Sergeant Clint Wilson packed up his Moe desk on Tuesday.

“I think very highly of our community in Latrobe and it has been an honour to serve them,” he said.

The Latrobe Valley’s top traffic cop is preparing to swap the local streets for a small screen set as he takes up a significant role in getting the road safety message across.

On Monday, Senior Sergeant Wilson will become the Operations Manager for Victoria Police’s Office of Film and Television, helping to facilitate the filming of officers across the state for projects including television show ‘Highway Patrol’.

“The office is the point of contact between the film industry and Victoria Police,” Snr Sgt Wilson said.

“We also manage the filming that occurs on roads and highways.”

For someone who believes the media plays a critical role in road safety, the shift from operational policing to the new posting was “in a way, a natural progression”.

“The show is a great opportunity for Victoria Police to enhance our road safety message,” he said.

“We need to keep pushing that message across, we do enforcement, but enforcement only goes so far.”

During eight years at the helm of the Latrobe Highway Patrol, Snr Sgt Wilson developed initiatives now being used in other police service areas across the state.

He said he couldn’t think of a better time to leave the region.

“We’re at record low as far as overall road trauma is concerned,” he said.

“Last year we reduced our serious injuries by 37 per cent and fatalities by about 35 per cent.

“Under the state action plan we’re aiming to reduce serious injuries and fatalities by 30 per cent by 2022. We did it in one year in Latrobe.”

Snr Sgt Wilson said one of Latrobe’s greatest triumphs was the growth in its partnership with other agencies including VicRoads, RoadSafe and Latrobe City Council.

It’s this collaboration that was the basis for the locally-developed crash audit method now being trialled in other areas.

He said police had historically been good at assessing the driver’s involvement in a collision and the new method sought to improve the assessment of environmental factors like roads, speed and vehicles.

The results of the audit are then communicated to other road authorities.

“It’s a holistic approach to assessing the contributing factors, not only to why the crash occurred, but the severity of the injury,” Snr Sgt Wilson said.

“For example, a car runs off the road and hits a tree, is there anything we can do to improve the roadside environment to lessen the likelihood of serious injury or death?

“We all make mistakes while driving and that shouldn’t cost us our lives.”

The local team tapped into experts from Monash University’s accident research centre, the TAC, VicRoads and the federal Department of Infrastructure and developed a training package for police members in Baw Baw and Bass Coast to implement the new audit method.

The audit system is now being trialled in Ballarat, the north-west metropolitan area, Greater Dandenong, the City of Casey and Cardinia Shire until July, when it will be assessed for potential roll-out to the rest of the state.

Since November he has overseen the further development and rollout of the audit system at Road Policing Command.

He plans to remain involved in the audit project and will make a presentation at this year’s Australasian Road Safety Conference on the Gold Coast in October.

Snr Sgt Wilson described his Latrobe Highway Patrol colleagues as the most professional and dedicated team he’d worked with.

He said all police members in the Latrobe Valley were committed to reducing road trauma.

“On long weekends, even though there’s lots of work for general duties police, they get on board and contribute (to traffic operations),” he said.