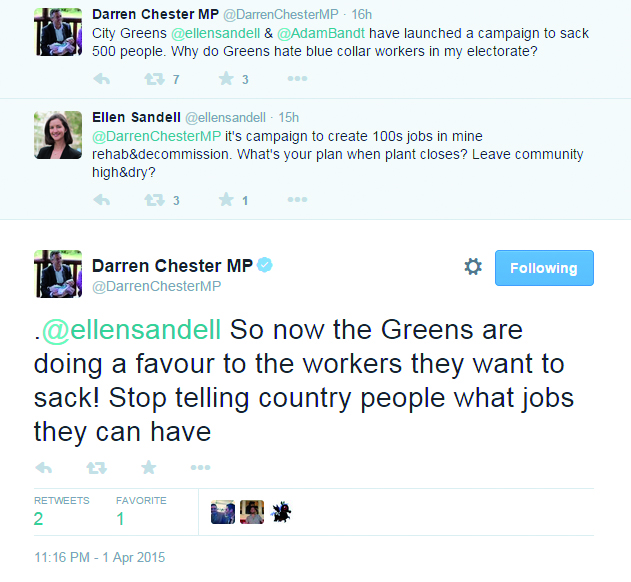 Calls for the closure of Hazelwood Power Station are getting louder as the Latrobe Valley remains home to Australia’s highest coal-fired power station polluters.

“We’re really concerned about the power plant shutting down and just leaving the community out in the dry,” Ms Sandell said.

“We know it’s inevitable it (Hazelwood Power Station) is going to close, so what we’re doing is putting pressure on Labor.”

‘Replace Hazelwood with Clean Energy’ gained about 2500 signatures in the space of 24 hours, which Ms Sandell said she would present to Parliament on 16 April.

“If you sack 500 Hazelwood power station workers in my electorate @AdamBandt will they be re-trained as baristas in your electorate?” Mr Chester tweeted.

He said the Greens would not be satisfied if their latest campaign was successful, stating they would “immediately start campaigning to shut down all other coal-fired power stations”.

“Not only are the Greens telling us what jobs we can have in the Latrobe Valley, they are now telling us which workers we have to sack,” Mr Chester told The Express.

“We’ve had a gutful of being told by city-based politicians what jobs we are allowed to have and how we spend our time on the weekends.”

Ms Sandell said Mr Chester’s statement was “irresponsible”, telling The Express there was no current plan for new jobs in the Valley.

“They seem to think the power stations will keep on running forever, but local people know that’s not true and it (Hazelwood) is being run into the ground,” Ms Sandell said.

The Greens’ plan involves the complete closure of Hazelwood Power Station, new pollution limits for coal-fired power stations and a mine and power plant rehabilitation program.

Ms Sandell said the mine rehabilitation alone could create 450 jobs for more than a decade and called on the State Government to include this in the May Budget.

She said the Government would have a “genuine conversation” with the community before making any decisions “regarding the future of any Victorian electricity generators”.

“The Minister recently visited Morwell to talk to the council and local residents about the community’s expectations for the coal mines when they reach their final end of use,” the spokeswoman said.

“The Minister also discussed broader economic opportunities for the Valley, including timber, agriculture and other uses for coal such as fertiliser.

“We’re getting on with the job of engaging with the communities affected and won’t be making empty political stunts like the Greens or jumping to hasty conclusions about the future of these mines that have real impacts on people’s jobs.”