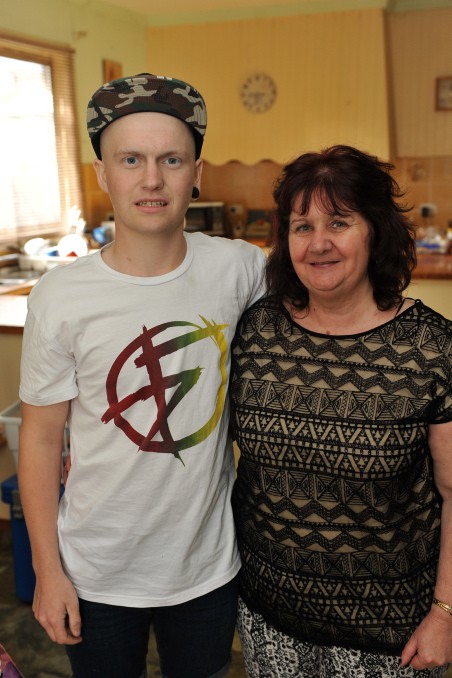 A PROCESSION of fellow BMX riders made a guard of honour as Sam Tormey’s coffin exited the Traralgon chapel.

Green balloons displaying the words ‘F#CK CANCER’ were also given to more than 400 attendants to release together.

Such was the supportive scene last Thursday, when the community farewelled the 16 year-old Morwell boy at Latrobe Valley Funeral Services, who died on Saturday, 28 March.

It was the end of a year-long battle with Ewing’s Sarcoma – a type of bone cancer in the left scapula metastasis nodules in his lungs.

“Sam was determined to fight this horrible cancer until the end,” mother Kay Tormey said.

Born on 20 August, 1998 at Latrobe Regional Hospital, Sam was known for his love of BMX riding and speaking his mind.

“He could be cheeky, direct, but always such a sensitive and loving fella’,” Ms Tormey said.

Ms Tormey said she, father Ian and siblings Trent and Sinead were always by Sam’s side to look after him throughout his illness and helped him with love wherever they could.

“Our family is so heartbroken to lose Sam at such a young age, but we were told by so many what an inspirational young man he was,” Ms Tormey said.

Sam’s death also follows an outpouring of community support. Close to 200 people attended a ‘Jam for Sam’ that saw BMX riders show-off their wheels and compete in various events to raise money.

“Sam has touched so many people’s hearts and it makes our family so proud of him to know he was loved so much,” Ms Tormey said. “Thank you to everyone.”

The family asks that donations be made to the Children’s Cancer Centre at Monash Medical Centre in memory of Sam.

Special moments in Sam and his family’s life

His doctor arranged for Ian, Sam and Kay to meet Alistair Clarkson, Luke Hodge and Jarryd Roughead from the Hawthorn Football Club