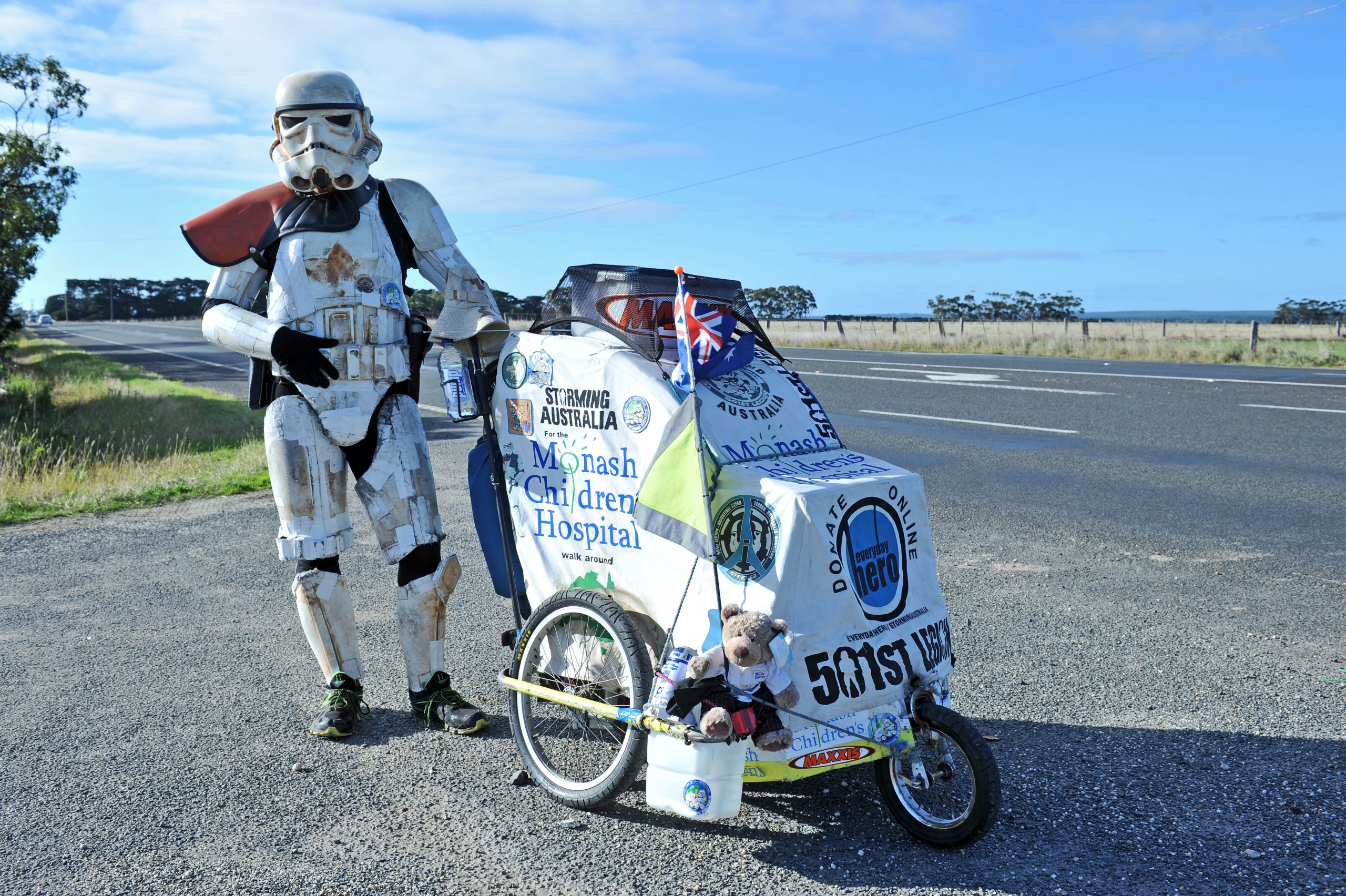 A Star Wars Imperial Stormtrooper scavenging for roadkill and hunting for kangaroo, goat, rabbit and snake in the Australian desert is not something you would ever expect to come across.

Finding protein sources through these methods on his walk across Australia became the norm for Scott Locksley, who has been walking since 2013 to raise funds for the Monash Children’s Hospital.

“I knew going into it you can never have enough food plus you go to the worst parts of Australia and there’s no shops,” Mr Locksley said, as he passed through the Latrobe Valley on Friday.

“That was always my fallback and lucky for me it worked, it worked a treat.”

A former Australian Defence Force member, Mr Locksley has endured the harsh terrain and weather conditions the Australian outback has to offer, including the desert.

“You’d walk all through the night and try and rest through the day as best you can because you can’t sleep, it was just horrible,” Mr Locksley said.

“Hardest thing I’ve ever done in my life.

“I’d pull the flap out from the back of my cart and sit under the flap for 10 hours a day, it was hard.”

Now rather dishevelled, Mr Locksley’s Stormtrooper armour saved his life on one occasion during his 15,000 kilometre trip when it stopped a King Brown snake from sinking its teeth into his calf.

“After two years it (the armour) is falling apart a bit, it’s not made for this thing but the tape holds it together,” Mr Locksley said.

“I wanted to finish in the one suit, start to finish, she’s not pretty but it’s doing the job.”

While his body has for the most part held up in a physical capacity, Mr Locksley said the biggest challenge was mentally staying on target.

“All of my toenails fell off at one point, just from the pressure of walking,” he said.

When he began the long walk, Mr Locksley could be seen wearing his Stormtrooper helmet at all times, but has since swapped it for a cap.

“When I was up in north-west of Australia and you were dealing with 45 degrees Celsius every day for months and months and months you wear the helmet, but then the flies get in and drive you nuts,” Mr Locksley said.

Part of the 501st Legion, a Star Wars costuming organisation, which raises money for charities across the world, Mr Locksley said he chose to be a Stormtrooper for the trip because kids in hospitals recognised and loved the costume.

With two weeks left of his trek to go, Mr Locksley, who hails from Greensborough, will end his journey at the Monash Children’s Hospital.

Visit facebook.com/StormingAustralia and follow the links to the donation page if you would like to donate to Mr Locksley’s trek for the children’s hospital.