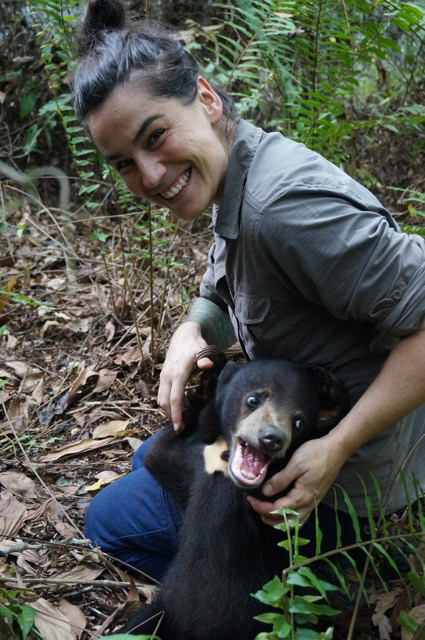 After raising about $60,000 for orangutan preservation, conservationist Casey Murtagh has spent a year in Borneo volunteering with the Orangutan Foundation International.

Born and bred in Morwell, the 33 year-old said she had travelled across the world but nothing had been as challenging as her year in a remote jungle location rehabilitating two Malayan sun bear cubs back into their natural habitat.

“Despite the cubs previously being exposed to humans, the cubs were still essentially wild.”

Among other caring duties, Ms Murtagh was tasked with taking the two sun bear cubs, who had previously been caught in the illegal pet trade, on daily walks through their new territory.

“It’s an incredibly tough environment to move through, but the bear cubs would do it with ease,” she said.

“There are so many potential dangers and situations that could arise at any given time, but the joy of seeing the cubs living free, doing what wild bears do, was worth every scare and every uncomfortable moment.”

Highly prized in Asian medicine, the extraction of bear bile using invasive techniques was common in many Asian countries.

This is a contributing factor to why the OFI does not limit its work to orangutans, with a ‘no turn away’ policy for all animals.

Many sun bears, like the cubs Ms Murtagh worked with, were caught in this trade and kept in terrible conditions.

“It’s a disgusting practice and people need to be aware of it. One cub (that I worked with) had her claws removed because of a machete wound… when she was taken from her mother. It took her a long time to even tolerate my presence.”

Ms Murtagh’s time in Borneo was challenging, both physically and mentally, however growing up in Morwell had incited a love of the wilderness within the conservationist from an early age.

“We used to take family trips to Inverloch, Cape Patterson and Wilsons Prom. We’d spend weeks out there at a time,” Ms Murtagh said.

“I’ve never felt comfortable in the city. Being in those (wilderness) environments makes me happy.”

“Casey has always loved the outdoors. I used to take her out bush four-wheel-driving and deer hunting. It was only a few years ago that she admitted that she had never shot anything,” Mr Murtagh said.

With plans of finishing her veterinary nursing course, Ms Murtagh hopes to drum up as much attention for sun bears as she can.

“Sun bears don’t receive as much attention as other animals, such as orangutans,” she said.

“The sun bears need a pristine environment, which is being rapidly destroyed. They need our help.”

To donate to the work of the Orangutan Foundation International visit

www.organgutanfoundation.org.au, or to specifically donate to the conservation of sun bears visit