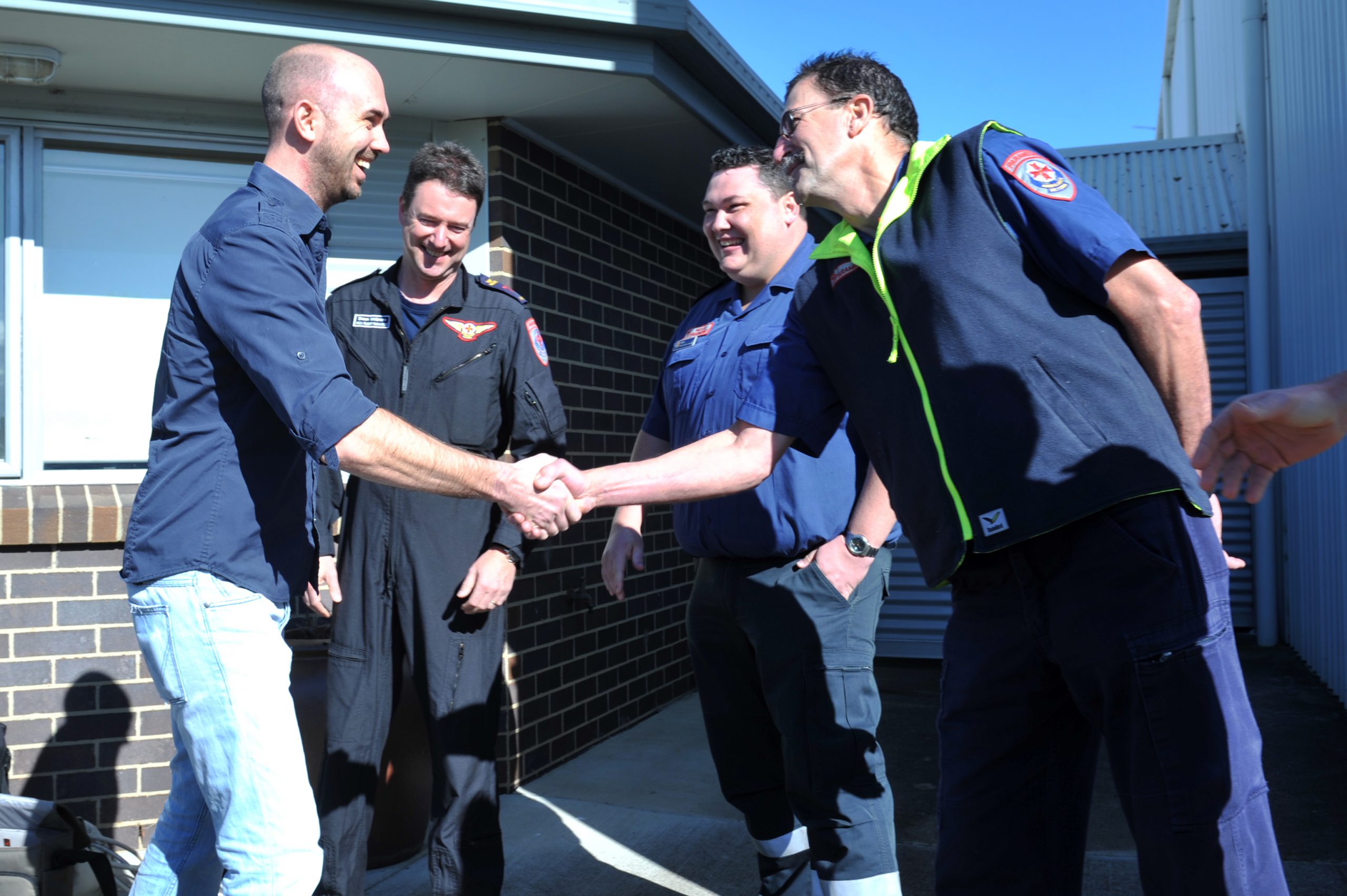 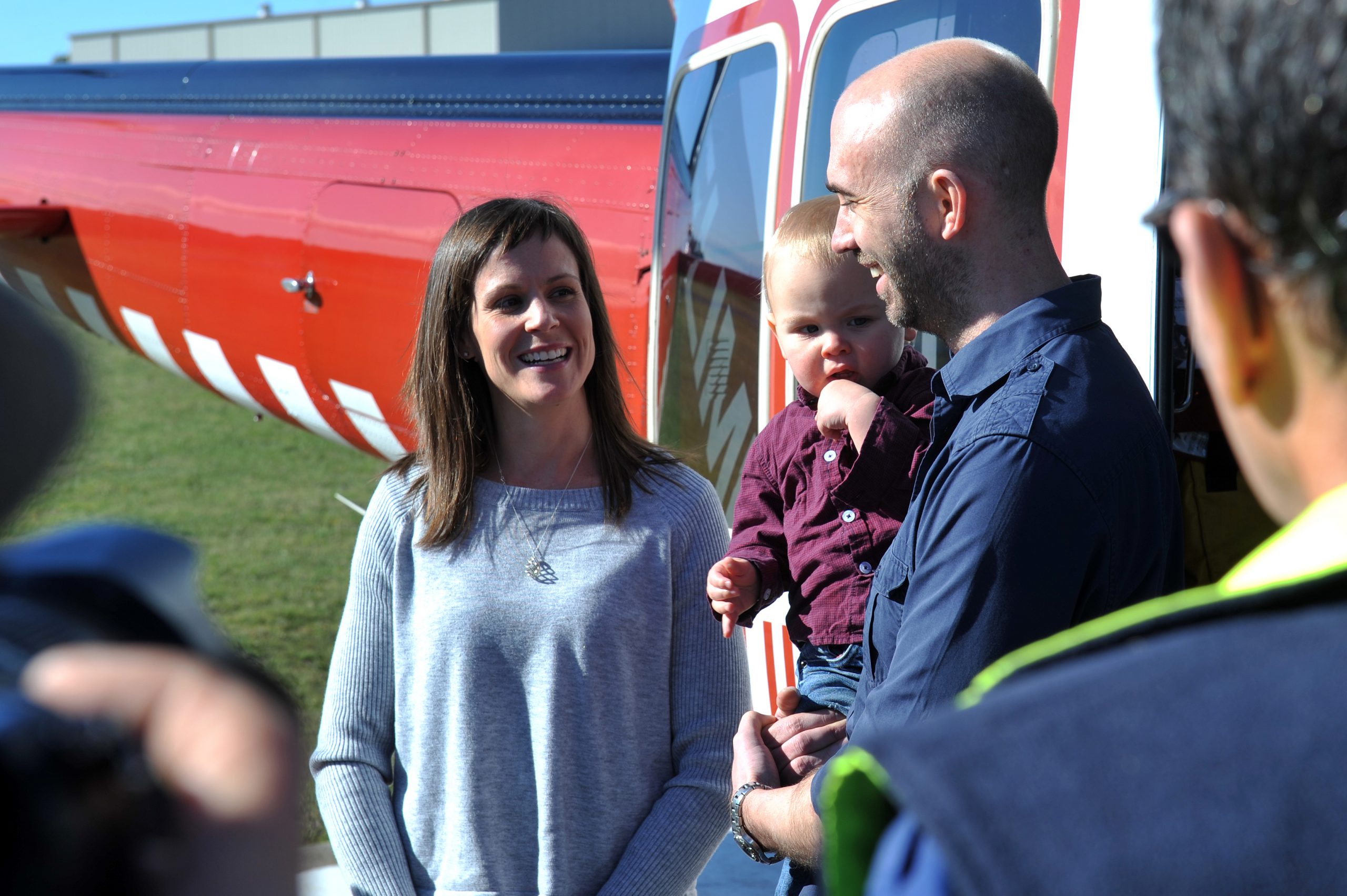 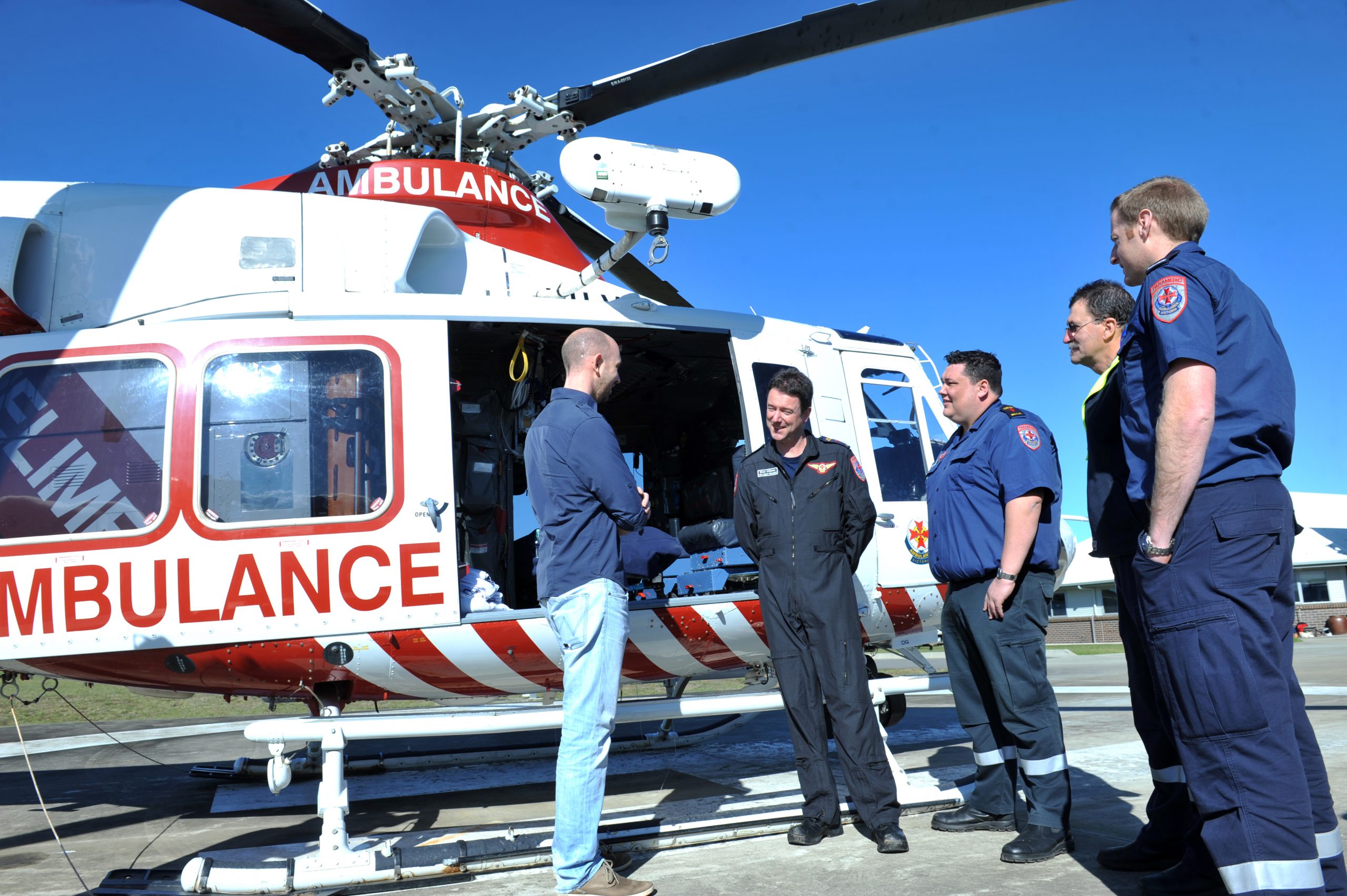 A 33 year-old father who came within half a millimetre of losing his life visited Latrobe Regional Airport last week to thank the paramedics who helped saved him.

Ryan King was dirt bike riding around Aberfeldie near Walhalla with four friends in February, when he clipped a log and landed on his head.

“I lost sensation in my arms and legs and then it sort of was pins and needles and then full feeling came back,” Mr King said.

“From then I knew something was significantly wrong, so I decided to not move and I just laid there and let my mates sort everything out.”

It was this decision which saved the Gisborne resident from losing his life or any ability to move, according to paramedic Ross Salathiel.

“The fact he wasn’t knocked unconscious, because if he’d have been unconscious his friends would have moved him and that would have severed his spinal cord.

“The fact he elected not to move himself, because he thought something was wrong. And the fact we were able to get his helmet off and get him out of there without moving his head or neck.”

Three paramedics assessed Mr King at the scene, removed his helmet and mobilised him, aware there was some sort of fracture in his neck.

They put him inside a vacuum mobilisation mattress and used a four-wheel drive retrieval vehicle – new to the Valley – to take him to the air ambulance.

Mr King was then flown to Melbourne’s Alfred Hospital, where he spent two weeks in the Intensive Care Unit and another fortnight in the cardiac ward. His partner, Rebekah Evans, was at home with their now 14 month-old son, William, when she got the call from Mr King’s dad about six hours after the accident.

“I was out in the garden while he was away (but) I knew he was going to come off,” Ms Evans said.

“It was a shock, I didn’t realise the extent of the injuries or anything like that.

“I was expecting a call from him saying, ‘come get me’.

“But his dad had left quite a few messages, because I wasn’t able to be contacted probably for about three hours.”

Ms Evans arrived at the Alfred about 5pm to hear Ryan had broken his C2 and C3 vertebrae, and required a plate from C1 to C4 to be fixed in his neck. He had lost about 50 to 60 per cent of movement.

He wore a ‘halo’ for three months and a neck brace for about six weeks, with regular physio treatment now helping improve his movement.

“I count myself lucky, just that I had that awareness not to move, my mates were unbelievable about it as well,” Mr King said.

“And for (the paramedics) for getting me to hospital.

“The doctors at the Alfred had said another half a millimetre of pressure on my spinal cord and I would have been dead on the spot.”

Mr King sold his two bikes as soon as he was discharged from the Alfred, unwilling to take the risk of a similar fall.

“I sold them as soon as I got out of hospital, so it was a bit awkward selling them with the halo on,” he said.