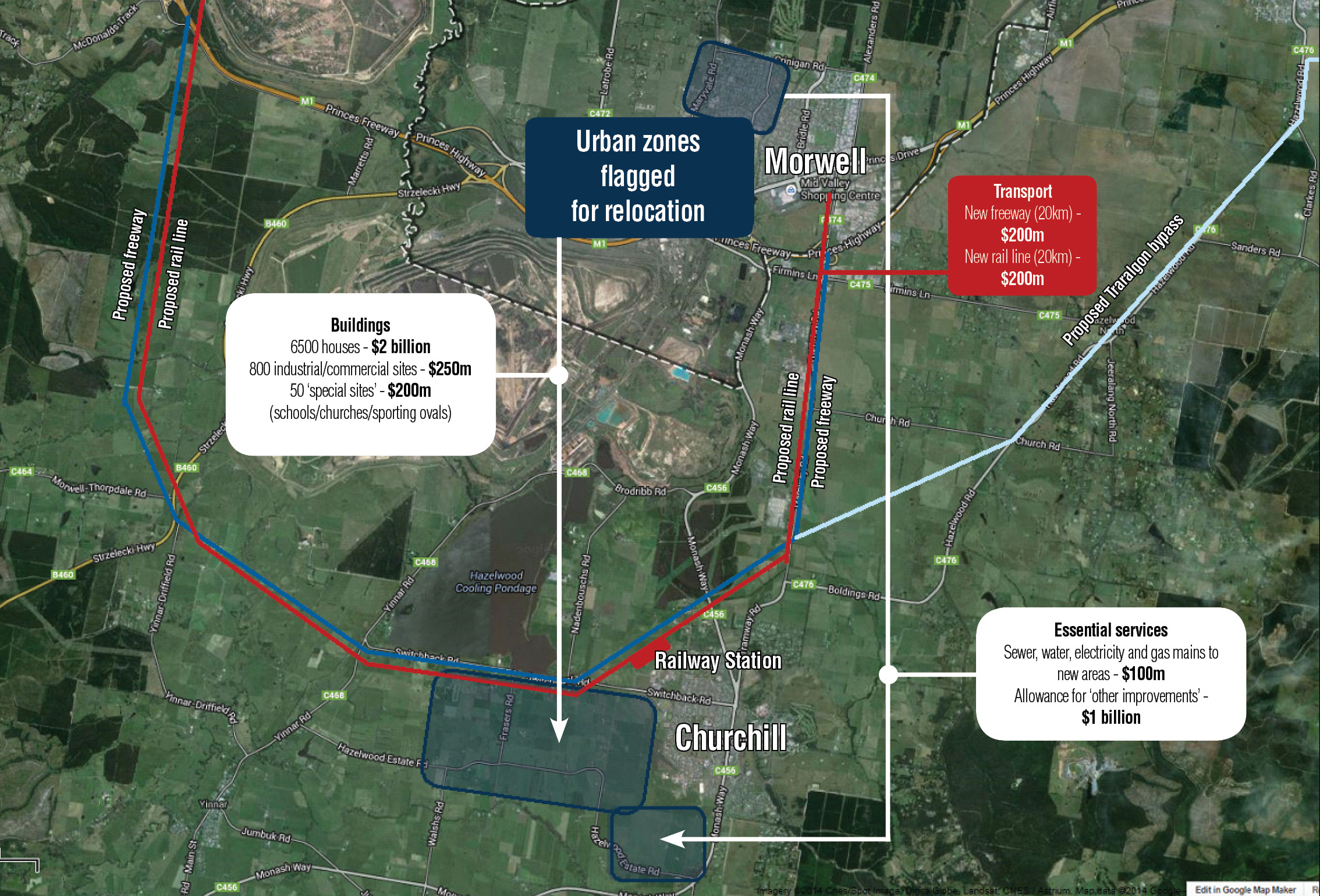 A partial relocation of the Morwell township could be one of the confronting scenarios residents may be forced to stomach to definitively solve the proximity threat posed by the Hazelwood open cut.

The Express can reveal a range of informal discussions held in the wake of the Hazelwood mine fire between government bureaucrats and Latrobe Valley stakeholders probed a range of ‘extreme’ multi-billion dollar solutions.

The ‘all options on the table’ discussions included a loosely costed $4 billion plan to relocate 6500 Morwell homes to Churchill and re-divert major transport infrastructure south of Hazelwood pondage.

Another concept involved a government buyout of Morwell’s residential and commercial properties south of the rail line, relocating them to the town’s north, creating a 750-metre buffer from the mine’s edge.

Latrobe City mayor Dale Harriman said the latter concept was raised in “open and frank” discussions during the Hazelwood mine fire; however, was soon dismissed as “politically un-palatable”.

“The idea was the land would be vacated and become a buffer zone and the freeway would be shifted to run along just south of the railway line,” Cr Harriman said.

“A lot of local stakeholders weren’t happy about the idea, but state and federal bureaucrats saw it as a viable option.”

Meanwhile, The Express has obtained a ‘back of the envelope’ costing by engineering firm GHD – as requested by a State Government contact – pricing Morwell’s relocation to Churchill’s west and south.

GHD’s estimate put the collective relocation of 6500 houses, 800 industrial and commercial sites, 50 ‘special’ sites such as sporting facilities and schools, essential services and redirection of the freeway and railway line at $4 billion.

The brief then probed the potential of mining Morwell’s subterranean coal reserves, as a means to reclaim relocation costs, putting the estimated extraction of one billion tonnes of brown coal at $4 billion.

On Friday government spokespersons said there “had not been any talks” about moving any part of Morwell within the Department of Economic Development and the Department Environment, Land, Water and Planning.

GHD Gippsland manager Jon McNaught said the relocation estimate was a “purely technical” exercise and was never supposed to enter the public domain.

“The idea behind that costing was that if the coal under Morwell has value then it might well actually be cheaper to move the town, dig the coal and resettle somewhere else,” Mr McNaught said.

While he described the relocation proposal as ‘extreme’, he said it was not the first time it had been raised, citing a similar concept pursued by the State Electricity Commission of Victoria before privatisation.

“Our analysis was about probing what potential is there to recover that money. If there is still demand for the coal, a government could be selling access to it, but I highly doubt anyone is going to pay $4 billion to get to it,” Mr McNaught said.

“Let’s say there’s one billion tonnes of winnable coal there under Morwell. Loy Yang has over one billion in their mining licence yet to be mined, and you could expect to be able to buy access to that for less than $4 billion.”

Cr Dale Harriman said discussions to relocate the Princes Freeway – initiated after ground instability forced its eight-month closure in 2011 – have continued to resurface since the Hazelwood mine fire.

He said federal bureaucrats raised the prospect for an alternative freeway bypass on Morwell and Traralgon’s northern side at an estimated cost of more than $2 billion.

“It’s a concept that’s been brought up a few times as ‘what would the feasibility be of us doing this?’, but the costings that have come back have been way beyond what would be considered reasonable,” Cr Harriman said. The alternative route would see the freeway head north between Moe and Morwell, reconnecting with the existing highway east of Traralgon.

On Friday, VicRoads regional director eastern region Scott Lawrence said the authority had no future plans to re-route the Princes Freeway at Morwell.

“We are confident the road is stable and that it meets the community’s needs. The freeway is serviced by real-time monitoring equipment that detects ground movement and conditions and alerts VicRoads, emergency services and mine operators of any risks.

“As always, VicRoads is happy to cooperate with the community and relevant authorities regarding any future developments in Gippsland and the impact on our road network.”

Last year a GDF SUEZ technical engineer told the Hazelwood Mine Fire Inquiry proper rehabilitation of its mine could force the relocation of the freeway and adjacent high voltage power lines.

Cr Harriman acknowledged while the potential re-routing of the Princes Freeway at Morwell was not officially on the State Government’s agenda, he said the issue needed serious consideration in the near future.

“There’s too much happening around us at the moment with the mine fire inquiry and the (main drain) Supreme Court battle with GDF SUEZ, but at some point the State Government and VicRoads need to actually grab their breath and say ‘what do we need to do about Morwell and how we are going to go about doing it?’,” Cr Harriman said.

“I think the concept of moving the highway and moving Morwell’s south is not so much of dealing with a ‘nightmare’ situation, it’s more about admitting that 20 to 30 years ago we didn’t have the advantage of the knowledge about ground stability that we have now.

“Having the mine so close to a residential area, we need to look at solutions for that. The government gained a lot of value as a state through the SECV, so now it needs to do something to look after the residents who have been put at risk.”

Mr McNaught said it would take “strong” leadership to bring the community into confronting discussions about the possibility of relocating Morwell homes.

“Currently this is purely a technical discussion, but then you’ve got this whole emotional thing of people who have been living there for generations,” Mr McNaught said.

“Who is a government to say a coal mine is worth more than a home. That’s the discussion we’ve got to have and get over here.

“There is no easy answer to this, and we could have a whole range of scenarios that are put forward to deal with Morwell, but these decisions and plans don’t come out of nowhere.”

Member for Morwell Russell Northe said he had not been privy to any such ‘drastic scenarios’ while in government, adding he hoped the open cut could be adequately rehabilitated to prevent any large-scale relocation measures.

“Some of these ideas would involve massive disruption and upheaval to this community and it’s hard to fathom relocation could be an appropriate outcome for the Morwell community and Valley as well,” Mr Northe said.

“The government is doing a lot of work right now in its exploration of ground stability issues and in terms of what appropriate rehabilitation and stability measures can be put in place.

“Once we have a better understanding of the technical aspects of the mine, hopefully we will have outcomes that will better provide stability for the mine and the Morwell community.”

Email your thoughts on the issue to news@lvexpress.com.au