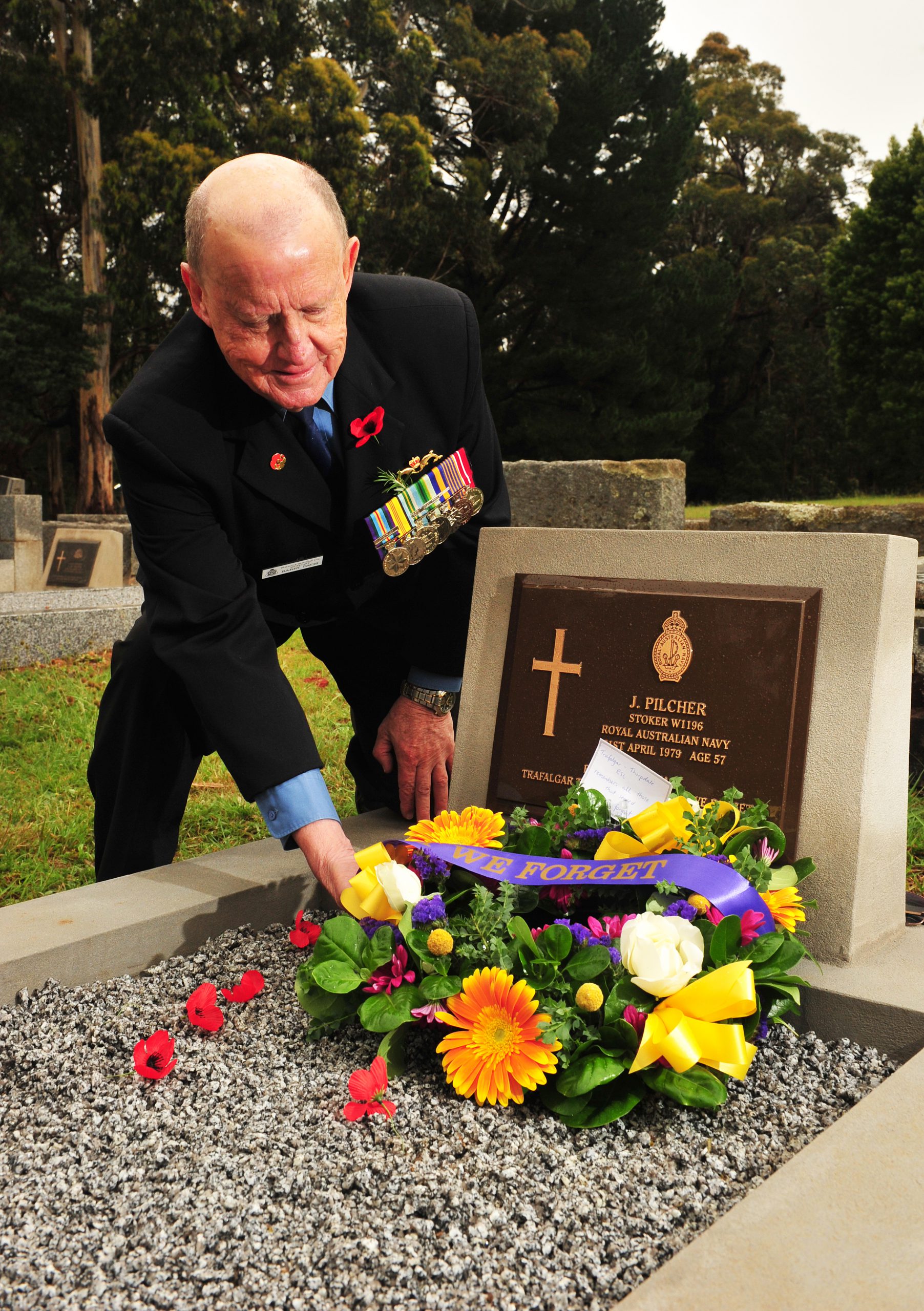 FOR more than three decades, the remains of war veteran Jack Pilcher have rested in an unmarked grave at Narracan Cemetery.

Yesterday, as the nation remembered those who lost their lives in conflicts, his life was finally and fittingly commemorated.

It’s all thanks to the efforts of Trafalgar Thorpdale RSL, whose president Ray James oversaw the process to honour the World War II veteran with an official war grave.

“All it was, was a piece of grass area and you wouldn’t have known there was a grave there,” Mr James said.

“There was no sunken area, nothing. But there was a soldier buried there: a veteran.”

Mr Pilcher, a stoker of unknown rank from Williamstown, served in the Royal Australian Naval Reserve from 1939 to 1946 before returning to Australia.

His military service included stints on HMAS Waterhen, the first Royal Australian Navy ship to be sunk by enemies in World War II, and HMAS Deloraine, which was one of four ships responsible for destroying Japanese submarine I-124, the first enemy submarine sunk in Australian waters.

He never married and lived a quiet and peaceful post-war country life on a property at Narracan East with the Richards family, before dying in 1979 of a heart attack related to his military service.

Trafalgar Thorpdale RSL applied to have Mr Pilcher recognised with a war grave, which was constructed at the cemetery and commemorated at yesterday’s emotional service.

“It just goes to show that the RSL remembers, we do remember,” Mr James said.

“It may have been a long time ago (since he died) but Jack has now got a final resting place and it’s marked, it’s not just an unmarked grave.

“To come across this information is rare enough, to then be able to follow it all the way through to get the physical place where people can reflect on Jack’s services… is fitting.”

“It’s our core business to find out about this sort of person, look after war graves, cenotaphs and make sure that people aren’t forgotten,” he said.

At yesterday’s service Commander Davis read out a dedication to Jack Pilcher from the Richards family, with attendees hearing about a man with a great sense of humour who loved “a bit of a skylark”.

“Jack’s good upbringing by his parents and military service always kept him in good stead. He was meticulous and fastidious in everything he did,” the Richards family wrote.

“He could often be seen sweeping the floor, washing the dishes, chopping firewood or helping out in any way he could to ‘run a tight ship’ as he put it.

“Jack was also neat and tidy within himself, always clean shaven and not a hair out of place.”

The Richards family remembered Mr Pilcher as having a “soft, gentle heart” who wore his six military medals “with pride” as he marched on Anzac Days.

With his parents and two brothers dying before him, the only living relative they recall in the 1970s was a nephew.

“On occasions he would ask us kids to sing him the song ‘Two Little Boys’, which never failed to bring a tear to his eye,” the Richards family wrote.

“Perhaps he was reminiscing about his own family, or every time he had spent in battle with the navy in World War II.”

They said they would remember him as ‘Gentleman Jack’.

“Our greatest memories of Jack are that he was always respectful, well-mannered and would help anyone out in any way he could.”

Commander Davis also read a poem about steam stokers before the Last Post rang out at the final resting place of ‘Gentleman Jack’.