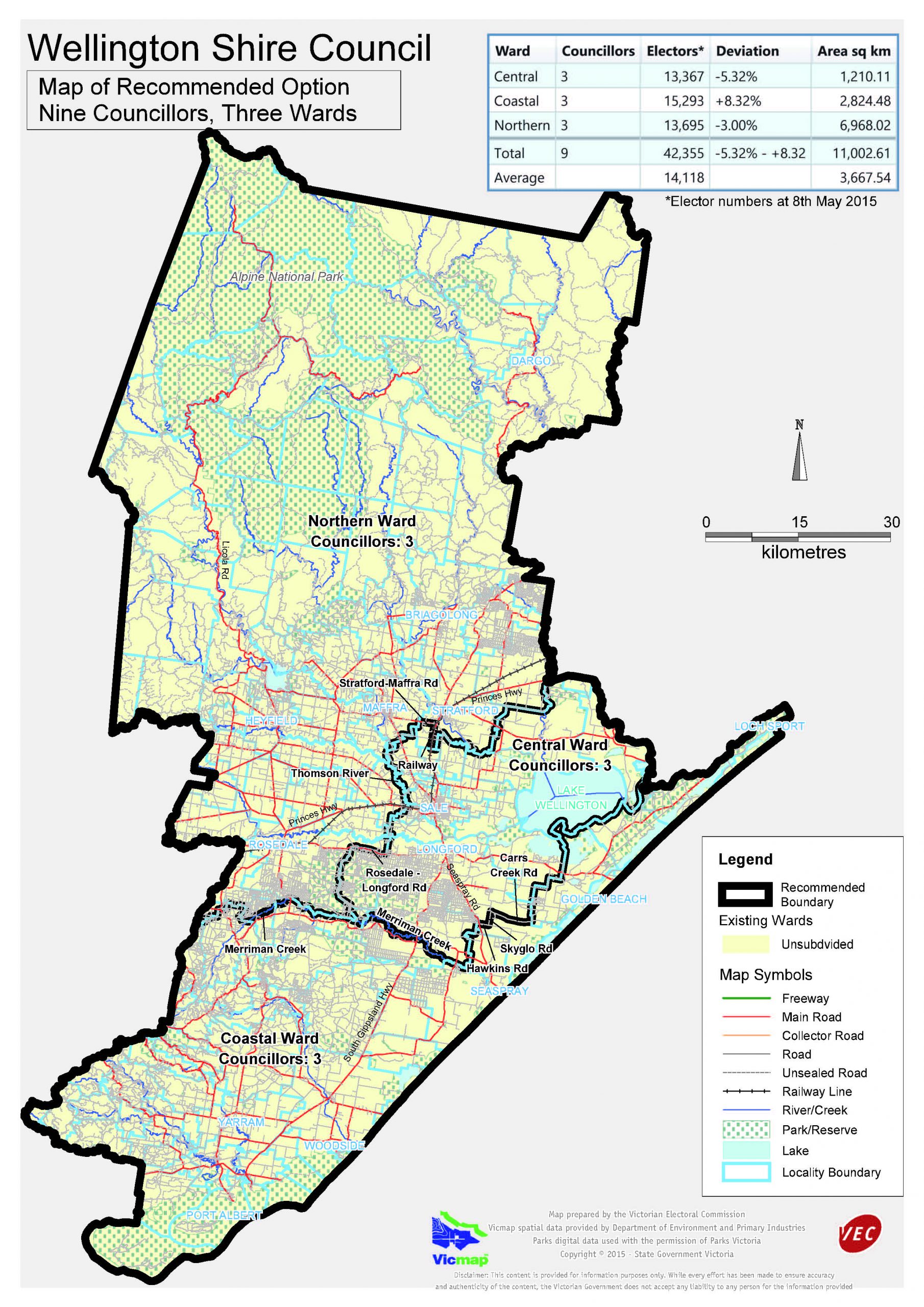 There are hopes splitting Wellington Shire into three wards would reinvigorate participation in council matters.

In its final report into representation across Wellington Shire, the Victorian Electoral Commission last week recommended the municipality be divided into three wards, each represented by three councillors.

The recommendation was different to the preferred option in the VEC’s preliminary report, to retain an unsubdivided shire.

Under the VEC recommendation, the three wards would be known as Northern, Central and Coastal.

The Northern ward will stretch from Rosedale, Heyfield, Maffra, Stratford up to the High Country.

The smallest ward in area, Central, will consist of Sale, Wurruk, Longford, Meerlieu and Lake Wellington.

The Coastal ward will include Yarram, Port Albert, Gormandale and communities along the Ninety Mile Beach.

According to the VEC, the three-ward option ensures adequate representation for communities across the shire.

“This model groups the interconnected towns of Sale and Longford, and retains a strong sense of unification of the southern part of the shire,” the VEC report stated.

“It also uses the Thomson River and Merriman Creek as a clear and logical boundary, which is easy for voters to identify.”

Currently, the nine councillors are elected by voters in the whole shire using the proportional representation system.

This voting system, requiring candidates to receive a certain quota of the vote, is likely to be retained in each of the three wards.

Since the review began in July, there was a dominant view from public submissions for the shire to be divided into wards, guaranteeing a spread of direct representation.

In its preliminary report, the VEC had a preference for the current structure, but also put forward the three-ward option for further consideration.

Of the 48 submissions received in response to the preliminary report, only two, including one from Wellington Shire Council, supported retaining the current structure.

The key theme outlined in the push for change was the perception of a lack of representation for towns outside of Sale.

Many submitters suggested having three wards would increase the direct accountability of councillors, with representatives having a better grasp of local issues. During a public hearing into the review, council argued the whole shire was represented under the current structure, pointing to current and proposed projects across the municipality.

According to the VEC, an unsubdivided structure usually increases the choice of candidates for voters.

However, the VEC noted during the Wellington review a strong desire, based on the large geographic size and diversity of the shire, for a subdivided structure to encourage local representation.

The VEC claimed that while the number of Sale-based councillors was proportionate to the population, current council membership had a gap in representation from the far south, west and north of the shire.

In the past two elections, only 14 and 12 candidates respectively stood for the nine positions on council.

Wellington Shire Council chief executive David Morcom said since the review began in July, council had taken part by providing submissions as part of the process.

“If the Minister for Local Government, Natalie Hutchins accepts this recommendation, Wellington Shire Council will have the same ward structure as Bass Coast, Baw Baw and South Gippsland shires.”

The recommendation has been submitted to Ms Hutchins for final approval. Any change will take effect for the next council election, taking place October 2016.