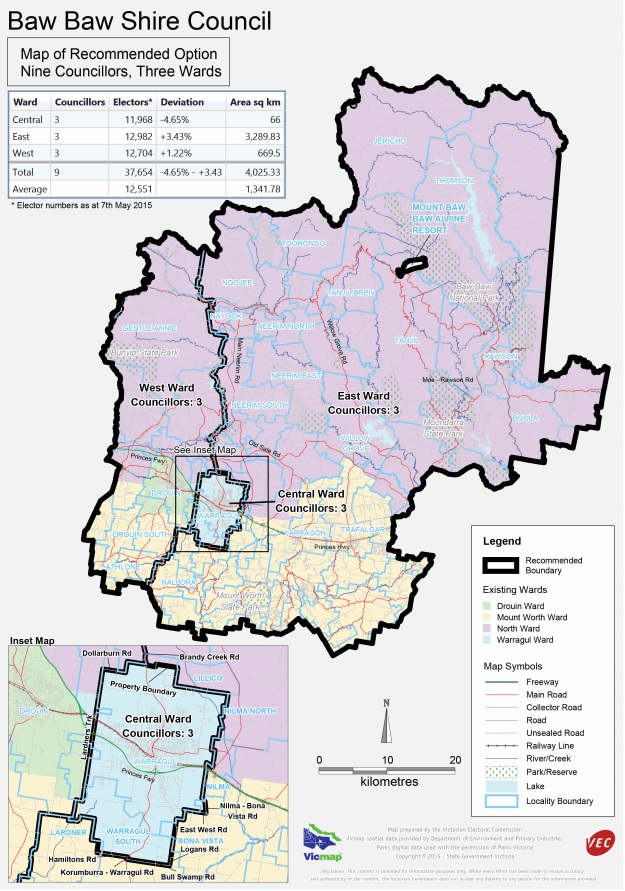 Rural ratepayers in Baw Baw Shire Council would be better represented in a ward restructure recommended to the State Government.

The Victorian Electoral Commission has proposed Baw Baw Shire be reduced to three wards, each represented by three councillors, in its final report to Local Government Minister Natalie Hutchins.

Central Ward would comprise the Warragul urban area, while West Ward will take in Drouin and rural areas to the north and south.

North Ward councillor David Balfour, who lives at Willow Grove, said while he expected long travel distances in the eastern part of the shire would remain a concern, the new ward structure could benefit smaller rural communities.

“This could be a positive because we will have three councillors at the eastern end of the shire, which would support those communities,” Cr Balfour said.

In making its final report, the VEC dismissed its initial preference to retain the current structure, as well as Baw Baw Shire Council’s preference to combine some rural communities in the south with the municipality’s largest city Warragul in one ward.

The VEC says its recommendation addresses concerns about disproportionate representation of urban interests over rural ones.

“The distribution of voters across the shire also means that, under option B (the recommended structure), the potential for the number of candidates being elected from outside the urban areas is increased,” the final report said.

It argued the new ward structure would also support the north-south transport and population corridors of the shire.

“It provides a blend of rural and urban areas in two wards, responding to the concerns of submitters (to the review) that the current structure preferences urban voters and interests.”

The report said having three councillors to cover East Ward, which at more than 3200km2 takes up three quarters of Baw Baw Shire, would help “offset” its large size.

Cr Balfour warned the sheer size of East Ward could result in a loss of connection between councillors and some more isolated communities.

The drive between two of the most extreme points of the new ward, Aberfeldy in the north-east and Hallora in the south-west, takes about two-and-a-half hours.

If approved by the State Government, Baw Baw’s new ward structure would be in place for next October’s local government elections.

Baw Baw Council did not comment at the time of going to print.