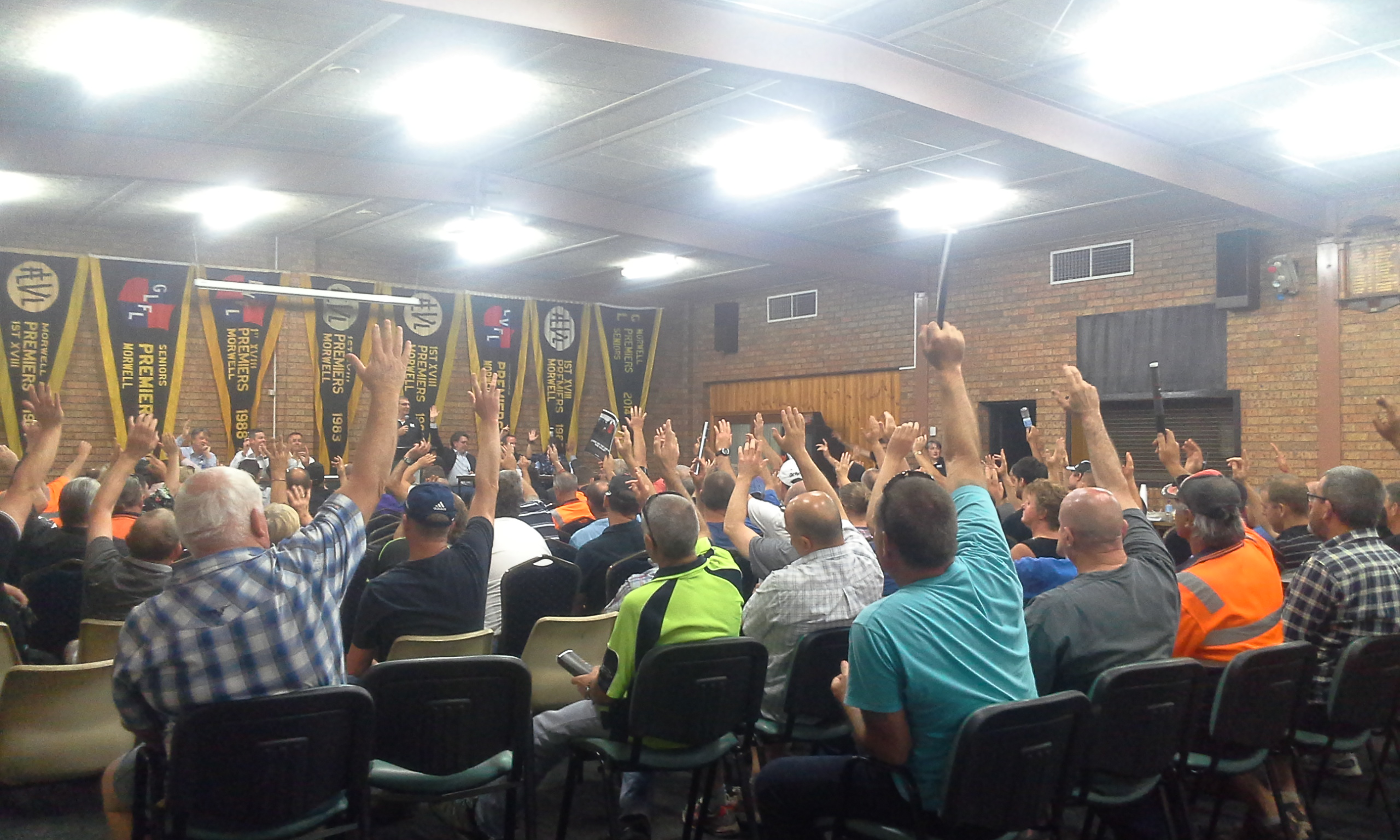 A NEW lobby group will step up the campaign for government departments and agencies to buy recycled paper made at Maryvale Mill.

The Maryvale Community Action Group will be formed in the coming weeks to put pressure on the Federal Government to buy Australian-made recycled paper and stop the dumping of imports from China.

Its campaign will also educate the public about buying locally made paper.

The Construction, Forestry, Mining and Energy Union’s national secretary Michael O’Connor urged Gippslanders to take up the fight at a public meeting of hundreds of workers and community members.

“We’re going to make sure that we work collectively as a community and bring everyone together, no cheap shots, everybody putting the best interests of the community first, that we can actually turn this around,” he said.

The CFMEU-led campaign to buy Maryvale-made recycled paper has united Gippsland politicians from the three levels of government and across different parties, several of whom spoke at last week’s meeting.

It came after Federal Government policy for its departments and agencies to purchase 100 per cent recycled paper – key to Australian Paper’s decision to build a $90 million de-inking and recycling plant funded with Commonwealth and state help – lapsed earlier this year.

A key concern among speakers at last week’s meeting was the government procurement practices of choosing cheaper products over Australian-made paper on a ‘value for money’ basis.

“We really need to be encouraging the Australian Government to look at real value for money. If we’re keeping Australian people in work we are not paying for welfare, we’re keeping you contributing to the economy, and I couldn’t think of a better thing to do,” he said.

It was a sentiment echoed by the Government’s own Darren Chester.

“The value for money proposition of the cheapest price being the best price is so plainly bloody stupid, surely someone in Canberra is going to figure it out eventually,” the Member for Gippsland said.

“If you guys lose your jobs we’re paying in some other way, in a welfare sense, to support you and your family in the future.

“It’s so much easier in a regional development sense to keep the jobs you’ve already got in Gippsland than to bring new jobs in. We’ve got to fight for the jobs we’ve already got.”

Mr Chester said the turnout at the public meeting and support for the issue would give the region’s politicians “the strength of numbers to take back to our colleagues in the city”.

Mr Northe said he was frustrated that governments spent money to support infrastructure at Maryvale but did not buy paper produced there.

“When you only have competitors that are international and you see that capital investment go into companies such as Australian Paper but then the same governments are not supporting the product, the loop is not being closed,” Mr Northe said.

“What is the point of taxpayers’ money being spent on upgrades at Australian Paper if we’re not supporting the product?”

Cr Gibson told the meeting council had also thrown its support behind the purchase of recycled paper made in Maryvale.

“Council does not just say ‘we support the mill’, we actually put our money where our mouth is,” Cr Gibson said.

“All of our photocopy paper is 100 per cent Australian recycled paper – your paper. This helps keep your $90 million de-inking plant open and keeps jobs in our community.”

Member for Eastern Victoria Harriet Shing, who could not attend the meeting, later told The Express the Turnbull Government needed to maintain the uptake of Australian Paper products and maximise opportunities to grow the industry.

“The Commonwealth has an obligation to make good on its promise. To do anything but honour its earlier position, which Australian Paper relied on, would be unconscionable.”

A joint statement released by Labor Senator Kim Carr and McMillan candidate Chris Buckingham said the ALP’s position was that government procurement practices should consider whole-of-life costs rather than purchase prices alone and governments should take into account the direct and indirect economic benefits of buying locally when making purchasing decisions.