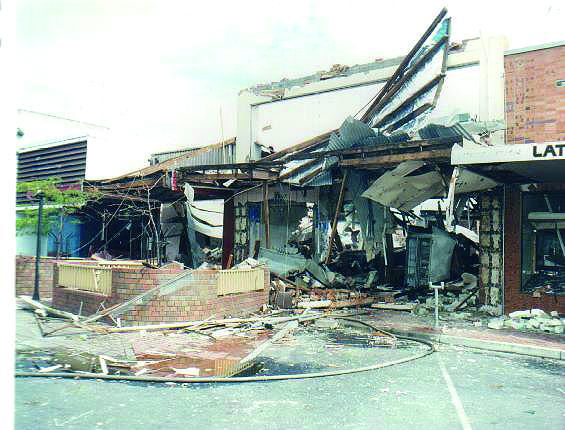 Twenty-five years ago the Latrobe Valley was rocked by an explosion in a Morwell pizza parlour on Sunday, 17 March at 11.45pm.

About 41 other business were also damaged.

The explosion was heard across Traralgon, Hazelwood North and Churchill.

Authorities suspected arson as the cause, with damage estimated in excess of $1 million.

Two days after the explosion it was reported the blast was deliberately lit without confirmation about it being either bomb or gas related.

Eleven days later, someone was charged with arson and burglary.

“Our radio base operator would normally have been seated directly above the pizza oven below,” Ms Giddons said.

“The massive explosion blew that chair into Buckley Street behind the old picture theatre.

“Our office was totally destroyed – radios, furniture – everything. Our pens, pencils and note pads disappeared, presumably into the sky.”

She said one of her drivers was travelling east past the post office on the highway when the explosion lifted his car.

Ms Giddons said when he saw the flames he called her immediately.

“My immediate reaction was shock and horror. Our upstairs office was blown away,” she said.

“I was speechless. Monday was looming, another business day, so we immediately relocated to a private home for 12 months.

“We scrounged second hand furniture and stationery – $25 for the lot. It was pure chaos. We searched for a radio aerial to allow temporary communication with 12 cars using UHF radios.

“The then Victorian Premier, Joan Kirner, visited us, presumably to boost business morale. Our focus was to restore Morwell’s reliable taxi service. Even the post office building moved; the cracks can still be seen.”

Church Street butcher Jim Morris received a call on the night of the explosion and immediately drove to the scene.

“The red glow told me there had to be an inferno somewhere near my shop,” Mr Morris said.

“There was a crowd hanging around. Firefighters and police were in control. I had worked in the shop that morning. Now it was destroyed with the front window completely blown out.”

“The council organised a street barbecue to welcome me back in business,” Mr Morris said.

“Amazingly no-one was killed and the people of Morwell were extra good to me, supporting me right through to our re-opening, and thereafter.”

Mal Fallon, with foreman Peter Keenan, was the Morwell CFA station officer-in-charge of the overall firefight, coordination of resources and personnel, and rescue of a trapped person at the rear of the premises.

“I had just finished the day’s duties and had just retired to bed at 11.45pm. The explosion rocked the station at 11.46pm,” Mr Fallon said.

According to Mr Fallon, CFA volunteers quickly responded, alerted by the brigade paging system to the fire, the fire siren, or headed to the station when they heard or felt the explosion.

Initially about 25 firefighters responded from Morwell and before time there were more than 40 responding on-site.

“My initial thought was where to place the fire truck because this was either an explosion or possibly a bomb,” Mr Fallon said.

“Perhaps this was the first blast and there were more to come. Even back in those days, terrorist plots were on our minds.”

After the fire was contained, firefighters worked to secure the scene, ensuring the integrity of what was left.

“I felt relief there were no injuries to CFA personel. Sadness was mixed with anger at the damage and what that meant to the community. I certainly empathised with the Church Street traders,” he said.

“All firefighters played their role that evening; their thorough training and discipline was on display.”

For his heroism, Morwell CFA volunteer firefighter Mick Franchetto received The Royal Humane Society of Australia Bronze Medal for Bravery in March 1992, presented to him by the Governor of Victoria.

A CFA Certificate of Commendation was also awarded to Mr Fallon.