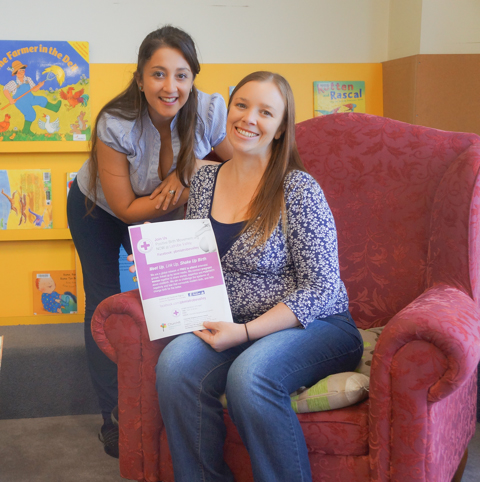 A global women’s movement that began with a vision of eradicating negative attitudes toward childbirth will now have a Latrobe Valley chapter.

Milca Perez of Jeeralang Junction and Trafalgar-based doula, or birth attendant, Jade Farmer, have joined forces to launch the local chapter of Positive Birth Movement, a grassroots organisation of mothers that began in the United Kingdom.

PBM was established in 2013 with the sole purpose of improving women’s birth experiences through sharing information and personal journeys.

It now has 300 discussion groups in 150 countries.

Their personal experiences and professional work in the birth industry prompted the two mothers to volunteer as facilitators for the local PBM.

Ms Farmer, a professional doula for more than a decade, said “positivity around birth is lacking” because of the many horror stories people hear.

Unlike midwives who provide medical care, doulas offer moral support and the comfort measures required by a mother during labour on a one-on-one basis.

“There is lots of fear of the unknown surrounding birth which is often not helped by the countless horror stories that everyone tells you,” Ms Farmer said.

“People need to know that birth can be an amazingly positive experience.”

Ms Perez, who moved to the Valley when she was seven months pregnant with her first child, said mothers often receive free support after childbirth, but lacked0 assistance during pregnancy.

“This is why PBM Latrobe Valley came to life, to fill the gap in antenatal support for this community,” the mother-of-two and infant massage instructor said.

PBM uses social media to share the latest trends and information on childbirth.

It has a monthly theme that all groups follow in regular group discussions.

The Latrobe Valley PBM will have its first meeting on Monday, 9 May, at Churchill Neighbourhood House at 10.30am.

This month’s theme is ‘The Hour of Power’, which will deal with what mothers experience during the first hour after birth.

Attendance to the meeting and joining the group is free.

Visit Positive Birth Movement-Latrobe Valley on Facebook to confirm attendance to the meeting.