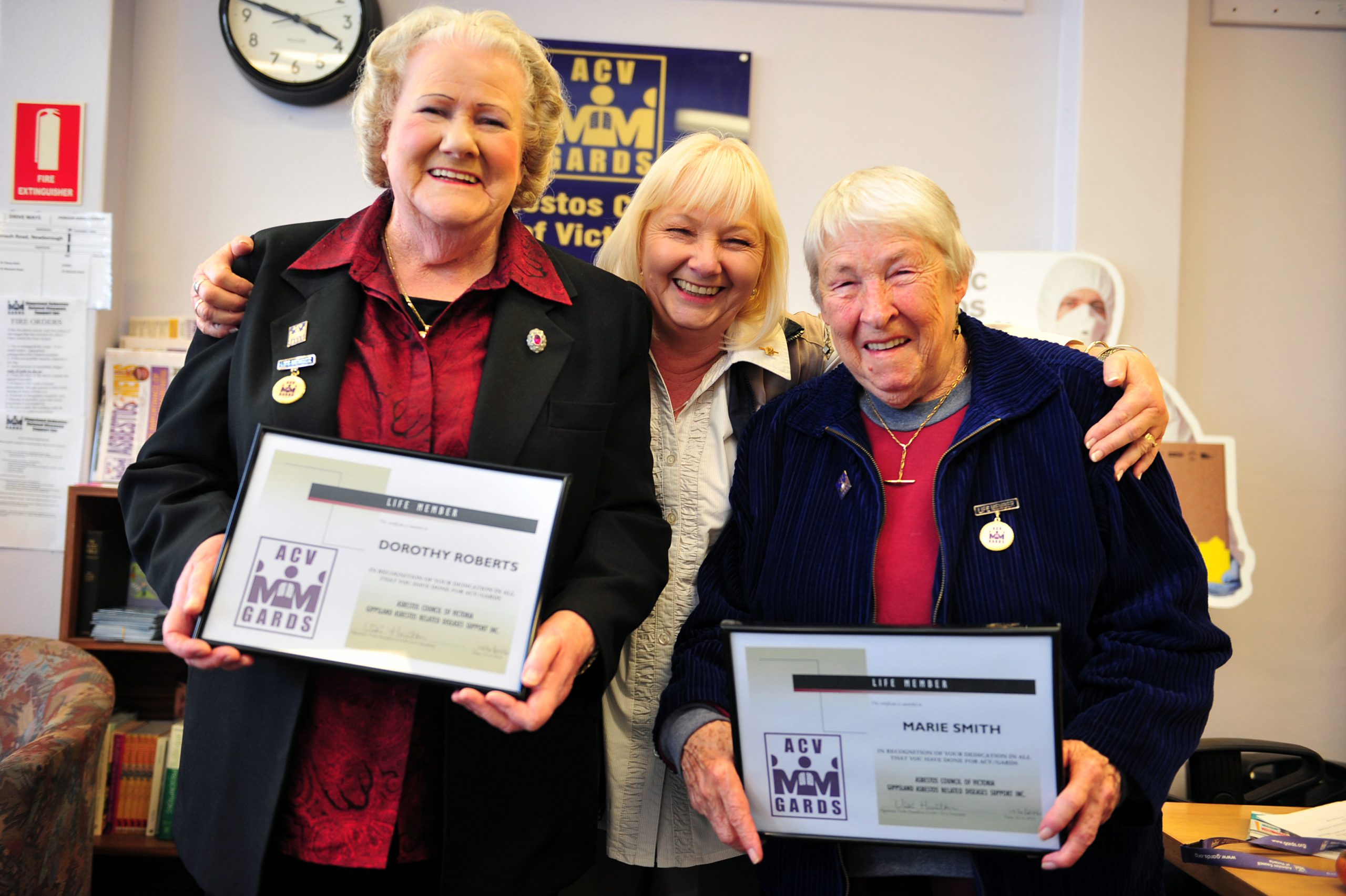 From behind-the-scenes work and ‘invisible’ tasks, to walking the corridors of parliament as community advocates, Marie Smith and Dorothy Roberts have dedicated countless hours to the Gippsland Asbestos Related Disease Support group.

The pair has been honoured with life memberships to GARDS, and awarded the Gippsland Trades and Labour Council’s John Parker Community Activism Award.

Marie Smith, vice president of GARDS, joined the group in 2003 after her husband Bruce was diagnosed with asbestosis.

“We figured they’d know more about things than we did,” Marie said.

“So we went to one of their support group meetings in the afternoon.

“They all knew how everybody felt. We were all in the same boat.”

Marie recalled the night they first danced at the Malvern Town Hall.

“I can still see him coming through the crowd and asking me for a dance,” Marie said.

It was during their dancefloor small talk that the pair discovered they had actually met before – Marie had tended to Bruce during her nursing training at The Alfred hospital after he came off his motorbike.

“When Bruce died I was sort of looking around because I wanted to be into something, to give something back to the community,” Marie said.

Marie said her involvement with GARDS “snowballed”, beginning with friendship from Dorothy, who reached out after Bruce’s death, to helping pack bags for events.

Now, there isn’t a weekday afternoon you won’t find Marie and Dorothy at the GARDS base in Newborough.

They’re a fixture at all the group’s events and have clocked up thousands of hours in meetings on asbestos issues, locally and interstate.

“I sort of enjoy it all very much, I feel as though I’m a bit useful,” Marie said.

“When you get old you’ve got all this life and you should do something with it.

“You can fritter it away every day just doing nothing and it’s all gone. I just think when you’ve got it you should use it.”

For GARDS president Dorothy Roberts, her introduction to the group came after the death of her husband Alan in 2000, who had been diagnosed with asbestos-related lung cancer.

Her daughter Vicki Hamilton OAM – now secretary and chief executive of GARDS – wanted to find somewhere people knew and understood what her mother was going through.

“I went with the intention of putting her in a support group that understood everything she’d been through because nobody else did,” Vicki said.

“She had nothing else in her life except Dad and I thought she’s just going to be isolated.

“She found others that understood everything she’d gone through.

“Dad would have a heart attack if he saw her now. She was this housewife who her whole life was looking after him and the family, and look at her now, she’s got an activism award.”

Asked how her involvement in the group had escalated, Dorothy said “it just happened”.

“We used to just do everything… packing of bags, answering the phone,” Dorothy said.

“You never know what you’re going to do from one day to the next,” she said of the current variety of the role.

“I was never interested in politics, but oh blimey, we know them all now.”

“They certainly put themselves out there, especially at their age of life, to help other community members.

“I couldn’t have thought of two better recipients.”