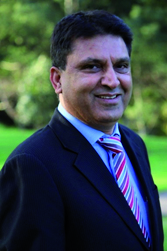 Almost half way through this year’s federal election campaign, the Australian Labor Party yesterday announced its replacement candidate for the seat of Gippsland.

Accountant and Morwell resident Shashi Bhatti has thrown his hat in the ring, saying he will focus on job creation, health and education.

Latrobe Valley teacher Carolyne Boothman withdrew as Labor’s candidate last month following legal advice about the incompatibility of her candidacy and job as a teacher.

Mr Bhatti said following this he contacted Labor and joined the party three weeks ago.

He said concern for jobs amid the decline of the car manufacturing industry prompted him to get into politics.

Mr Bhatti said he wanted to see a long-term vision for Gippsland, including the economic transition of the Latrobe Valley.

“(Government) should be thinking about what we can manufacture here,” Mr Bhatti said.

“If people are healthy and educated and we create jobs, the economy will take care of itself.”

Mr Bhatti settled in Gippsland in 1989 after immigrating from India. He became an Australian citizen in 1992.

He married wife Daljit Bhatti after arriving in Australia and they have three sons.

Mr Bhatti worked as a machine operator, forklift operator and for the local petrol station while studying an Advanced Diploma of Accounting.

He later completed a Bachelor of Business, majoring in accounting at Monash University, Churchill.

“In Australia, I was able to access education and training,” Mr Bhatti said.

“I took on any job I could to pay the bills and feed the family.

“I totally endorse the values of the Australian Labor Party – providing opportunities, jobs, education and access to healthcare.”

When asked whether he was concerned about coming into the election race so late, Mr Bhatti said four weeks was “plenty of time if we do it properly”.

“I think we’ll give the Nationals a run for their money,” he said.