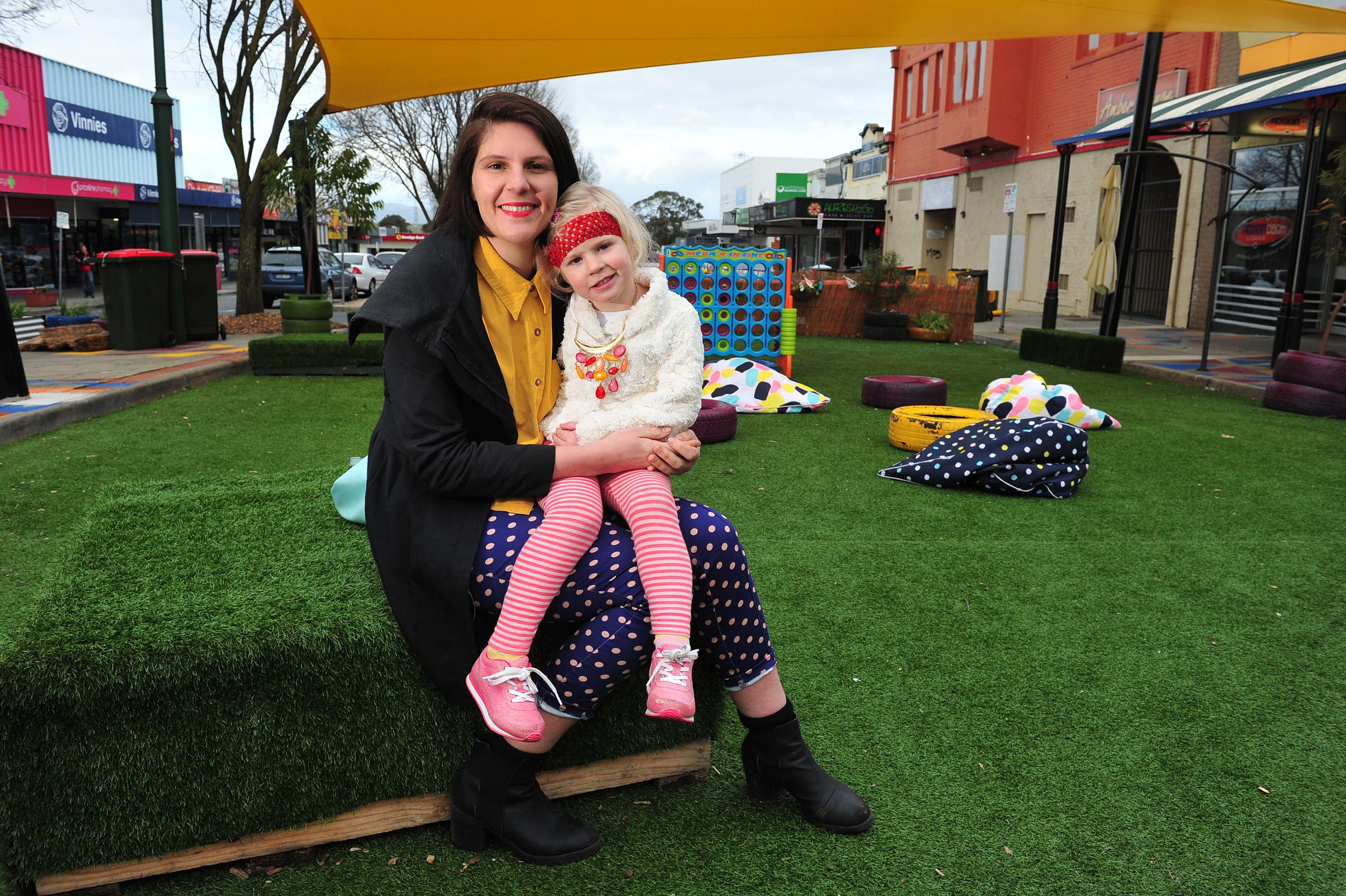 A temporary park on Morwell’s Tarwin Street looks likely to remain in place for the rest of the year and the duration of summer, following calls from local businesses and the community.

Latrobe City Council voted on Monday night to extend the duration of the pop-up park until 31 March, 2017.

The park opened in February this year with funding from VicHealth and has hosted artistic workshops and events in a bid to get people active.

It has required the temporary closure of a section of the north-bound lane of Tarwin Street.

On Monday night, employee of the nearby deli, local artist and mother Steph Shields told councillors the space had fostered direct engagement with her community.

“In my experience, the park has not only provided a place of gathering, but has actually begun to produce its own community where familiar faces form members,” she said.

“Rather than being surprised by an event downtown, I look forward to them.”

Deli-owner Tania Reid told The Express the park had provided a safe space for children to play.

“It’s just brought so much joy to the town,” she said.

Council survey data found 77 per cent of traders in Morwell would like to see the duration of the park extended and 69 per cent wanted to see the park become a permanent fixture.

In a survey of park-users, 45 per cent of people indicated their physical activity had increased from using the park and 54 per cent were able to get to know other community members as a direct result of activities and events held at the park.

On Monday night, two councillors voted against the motion.

While not against the park in general, they believe it should be handed over to the community to run.

Councillor Sandy Kam said council should take a back-seat and “allow the community to activate it”.

“We need the community to own it,” Cr Kam said.

She told The Express she wanted to see a report on the park’s progress brought before the new council in February, so it had ample time to make a decision on the park’s future.

Councillor Peter Gibbons told the council meeting the experiment was over and council had to make a decision on whether it would continue the park, or hand it over to the community to run.

“The council can regulate it in the sense of providing legalities regards to location, but the running of it should be handed over to the community,” Cr Gibbons told The Express.

According to a council officer’s report, council is negotiating with the Department of Health and Human Services for access to further funds and temporary staff in council’s community services division could support the extension of the park’s operation.

“Also, VicHealth is offering both in-kind and financial support to the park with a view to long-term sustainability as a separate submission proposal,” the report stated.

Although council has signalled its intention to continue the park, it will not make a final decision on the matter until 12 September, to allow members of the community to make submissions.

Submissions can be made to Stuart Simmie, Coordinator Community Resilience, Latrobe City Council, PO Box 264, Morwell 3840; by email to Stuart.Simmie@latrobe.vic.gov.au or uploading to the website  www.latrobe.vic.gov.au/tarwin by 31 August 2016.