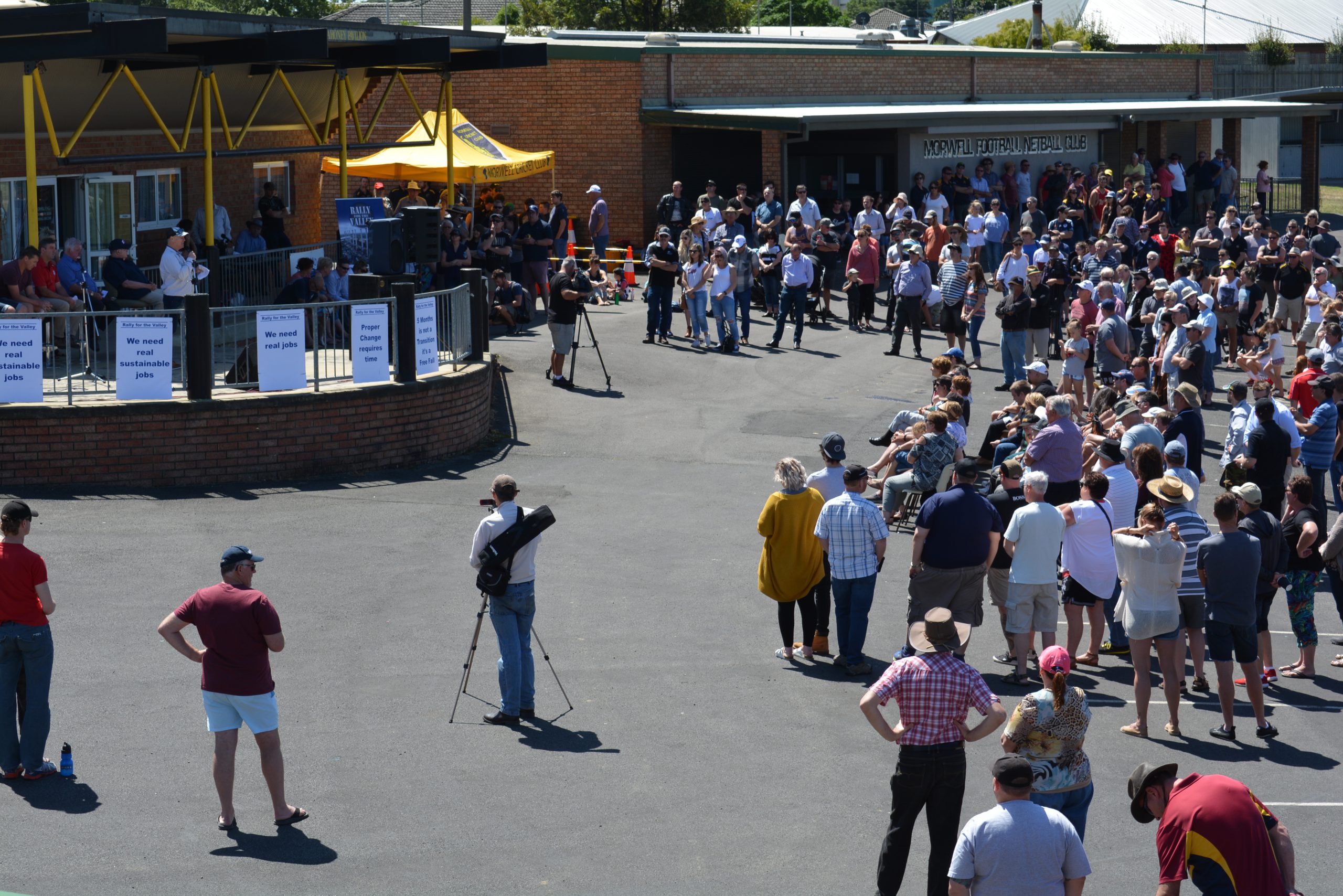 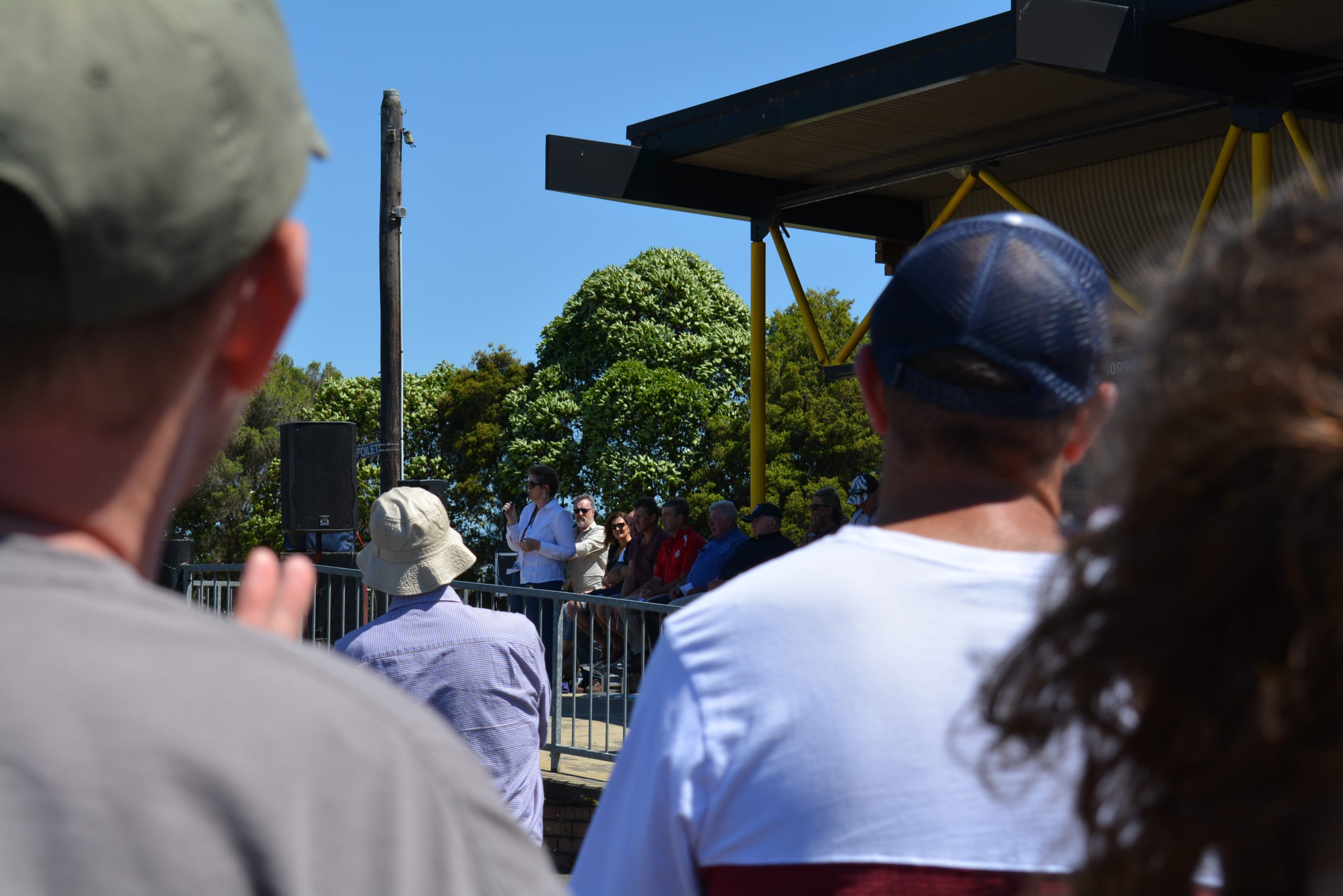 Premier Daniel Andrews has been urged to keep the Hazelwood power station and mine open “for four to six years, at a minimum” at a community rally in Morwell yesterday.

The message to the Premier was one of four resolutions passed at the Rally for the Valley community event.

About 300 people attended the rally at Morwell Recreation Reserve, many drawn from the ranks of the 700 Hazelwood workers and contractors who will lose their jobs when the plant closes.

Other resolutions called on Hazelwood owner ENGIE to put the money earmarked for mine rehabilitation into a community fund and give the region time for a “genuine” transition to occur, allowing the region to diversify its economy.

The final resolution called for a community rally to march on state parliament on 22 March.

At the end of the rally, event co-organiser Ray Burgess, owner of Morwell’s Newspower newsagency, called for a show of hands in support for the resolutions.

“I can’t see any hands down,” Mr Burgess said.

“Thank you all, that was unanimous support for what we’ve put up here today.”

The rally includes community members from across the spectrum, ranging from older workers who remember the region’s glory days prior to the privatisation of the State Electrical Commission in the early 1990s to young families worried about how the closure of Hazelwood will impact them.

Lee Mackay, whose husband Jason is a Hazelwood worker, said they had been promised work at the plant until 2025.

“So we built our life around that,” Ms Mackay said.

“We had our four children, we built our dream home.

“We thought we had another 10 years.”

Engie announced in November last year it would close the ageing plant on 31 March.

The announcement followed comments made by the company’s chief executive, Isabelle Kocher, to a French Senate committee in May last year it was investigating “all possible scenarios” for Hazelwood, “including closure, or a sale if the state of Victoria tells us that it cannot meet power generating needs without this plant”.

Mr Makepeace said as the co-owner of a small business with his wife he was worried about the “huge” snowball effect of the closure.

“I’m the father of four kids and I’m really concerned about the future for my kids, especially in trades,” he said.

“If we start to close down the power stations, trades is going to go by the wayside.”

Those concerns extended to the community members who attended.

Bill Di Iorio worked at the now-closed Energy Brix briquette factory and described the closure of Hazelwood as “the biggest kick in the gut we’ve had”.

He said unless the jobs could be replaced “one business after the other is going to close” and called on Mr Andrews to pay attention to regional Victoria.

“Tell him that we’ve got votes and we’ve got a say,” Mr Di Iorio said.

George Andreou spent 30 years at the SEC until leaving during the privatisation era.

Mr Andreou said he didn’t have much hope Hazelwood could be saved but jobs could be brought to the region.

“They can bring some industries into the Valley if they really want to… it’s all politics,” he said.

“Just look around Morwell. Morwell’s a great city to live in but it’s so sad.

“Everywhere you walk, there’s empty shops, houses up for sale.