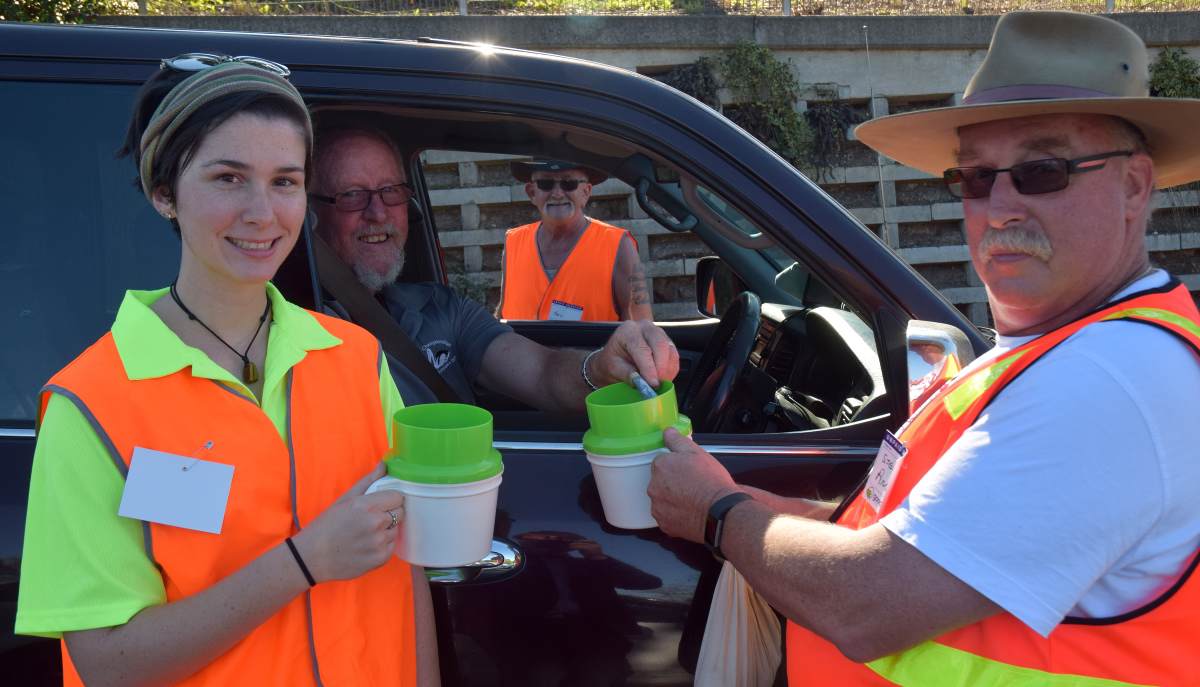 Punters across the Latrobe Valley reached deep into their pockets this year, raising more than $135,000 for the Royal Children’s Hospital Good Friday Appeal.

Bushies Bakery and the Glengarry Good Friday Community Picnic raised in excess of $76,000, as keen supporters camped outside the bakery overnight to get their hands on some of the bakery’s renowned hot cross buns.

Event organiser Dean Sutton said $1 from every packet of buns sold went straight to the Good Friday Appeal, stating it set a “high target” to beat next year.

“It was so good to see the town alive and have the community out to support such a worthy cause,” Mr Sutton said.

In a sign of solidarity, staff from the Mooroopna Bakery in northern Victoria drove over night to provide Bushies with a van load of buns to help meet the popular demand.

The 350s Blues Band kept crowds entertained while the Easter bunny made special appearances on a horse and cart and in the town’s fire truck.

The Traralgon Apex Club and Glengarry Community Association provided a sausage sizzle and sandwiches respectively, while the junior footy club sold soft drinks with all money raised donated to the Appeal.

Inclement weather meant tin rattlers had to take shelter throughout the day along the Princes Highway in Traralgon, but that did not hinder the good will of the passionate community.

REH Cork Club president Roy Arnold said the club raised more than $20,000 at the intersection but estimated they could have raised an additional $10,000 had the weather been more permitting.

“We were very pleased with our efforts though, it was looking really good on Thursday night but when the rain set in on Friday we didn’t collect as much as we had expected to from the traffic lights,” Mr Arnold said.

The club, whose sole aim is to raise money for the Good Friday Appeal and spruik the good work of the Royal Children’s Hospital, held many fundraisers throughout the year.

“We had the Latrobe Valley Street Machiners Car Club and their big car show in February that raised about $6000 and only two weeks ago we raised $2900 from a country and western show by Our Kinda Country at Flanagan’s Irish Bar,” Mr Arnold said.

The popular Friday night Royal Exchange raffles raised more than $6000 and the Kay Street Garden craft market raised about $10,000 for the children’s hospital.

It was much the same excitement at Old Gippstown in Moe where more than 1000 people flocked through the gates for the park’s second annual Easter egg scavenger hunt.

“The whole idea was for the kids to go through the park looking for 41 clues that will make up the words ‘Happy Easter at Old Gippstown’ and all those kids who participated received a chocolate bunny regardless if they found all the clues. We were pretty lenient with them,” Old Gippstown manager Kevin Reardon joked.

At the time of going to print, Mr Reardon said Old Gippstown had not counted the money, but told The Express he estimated about $800 was raised from the event.