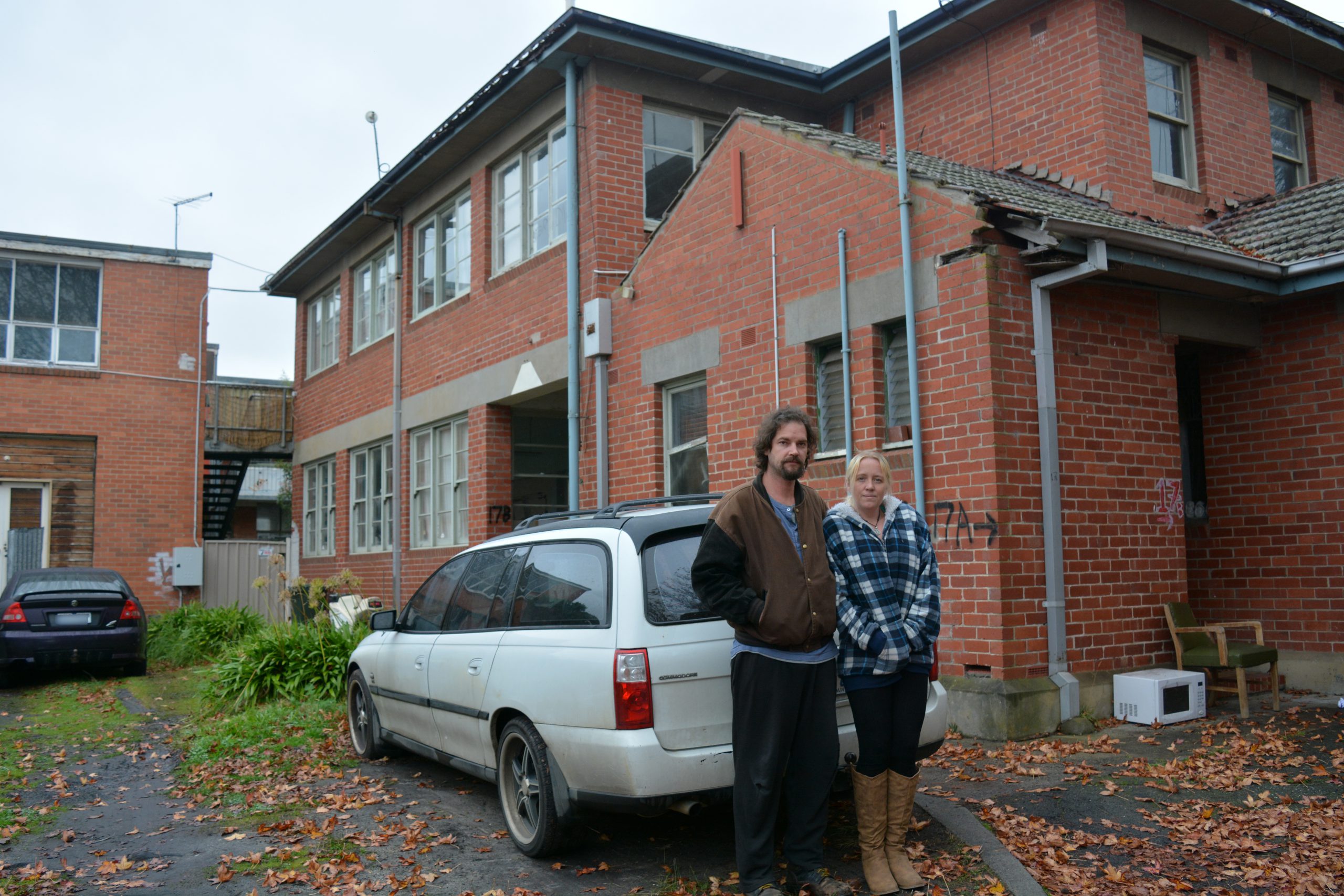 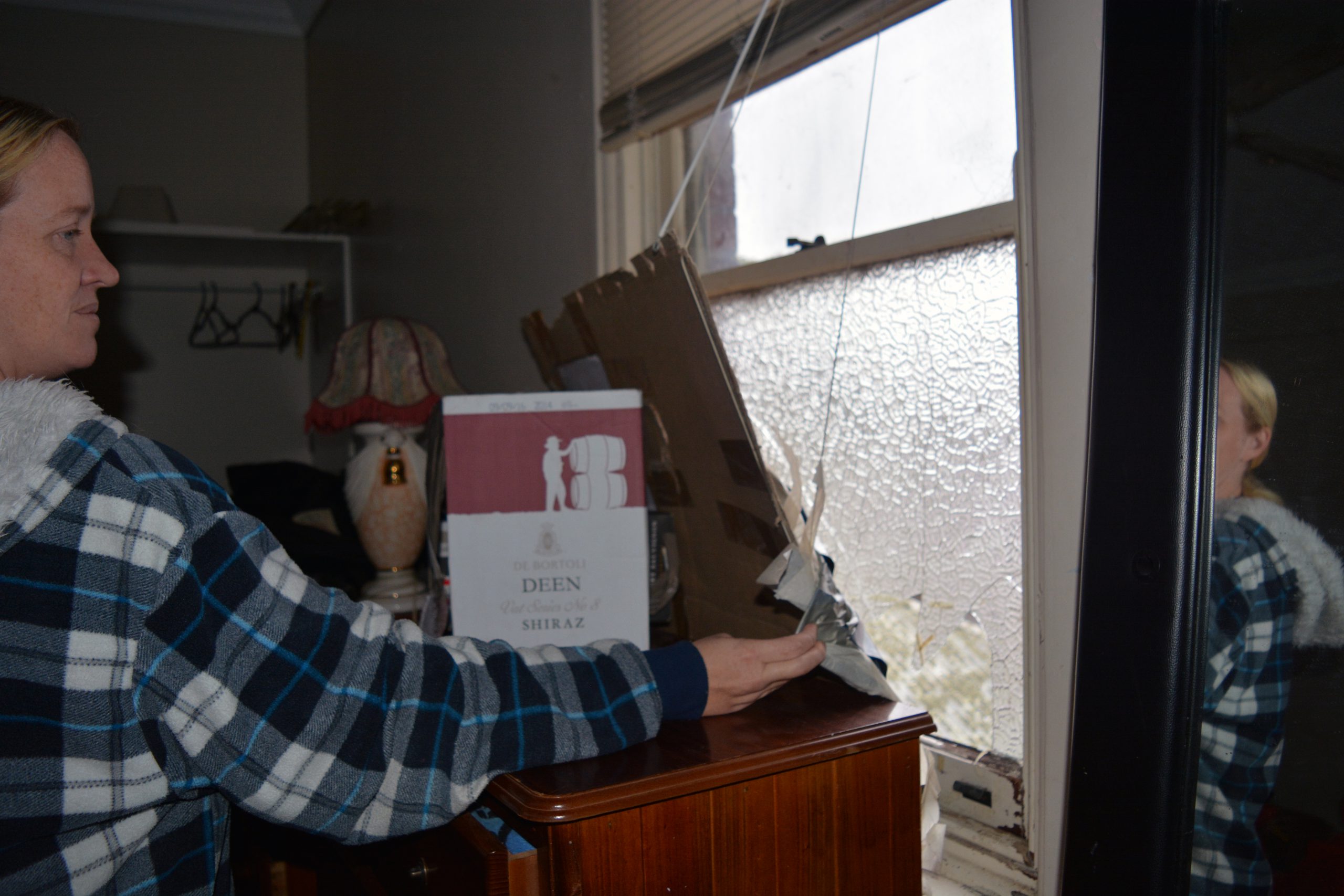 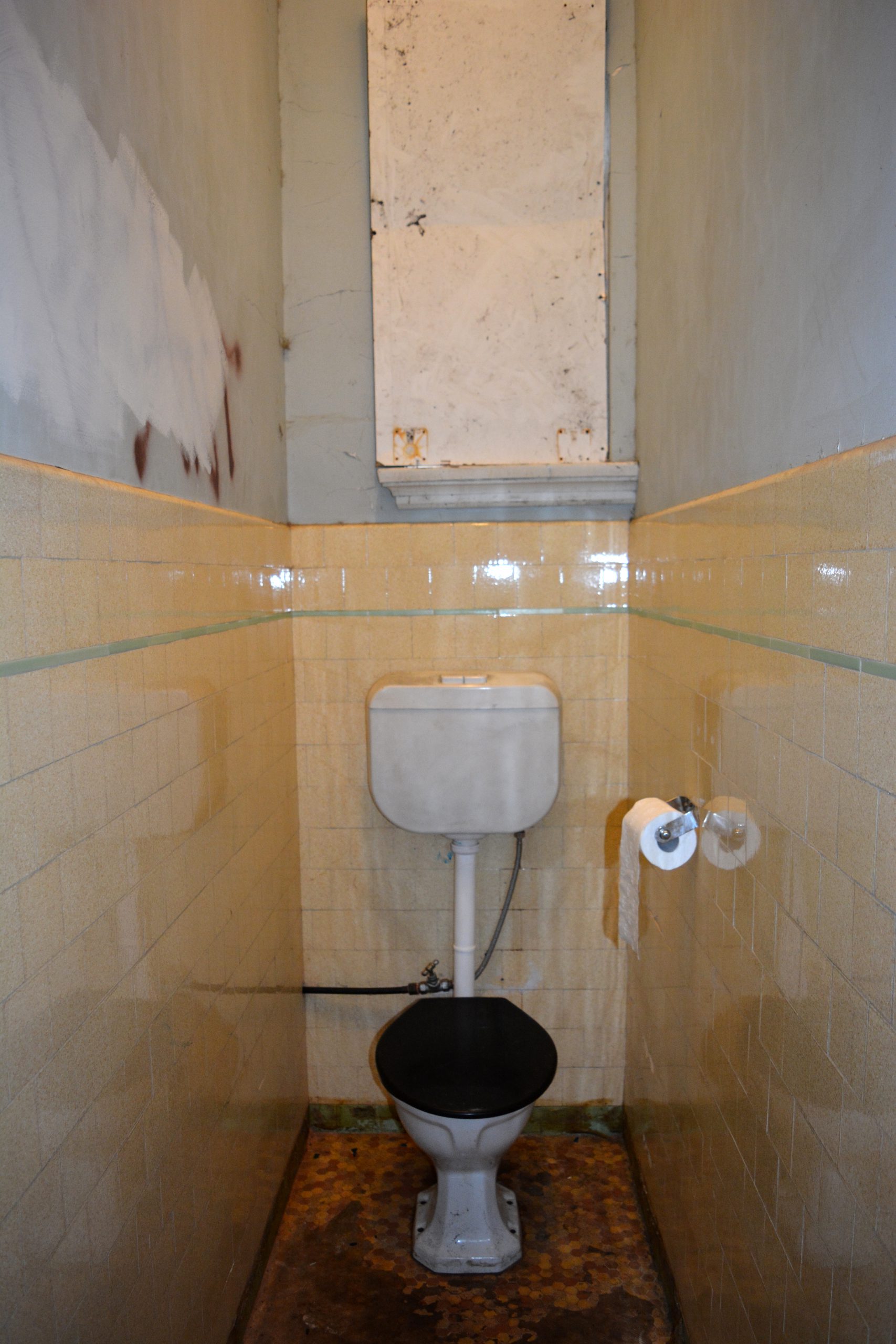 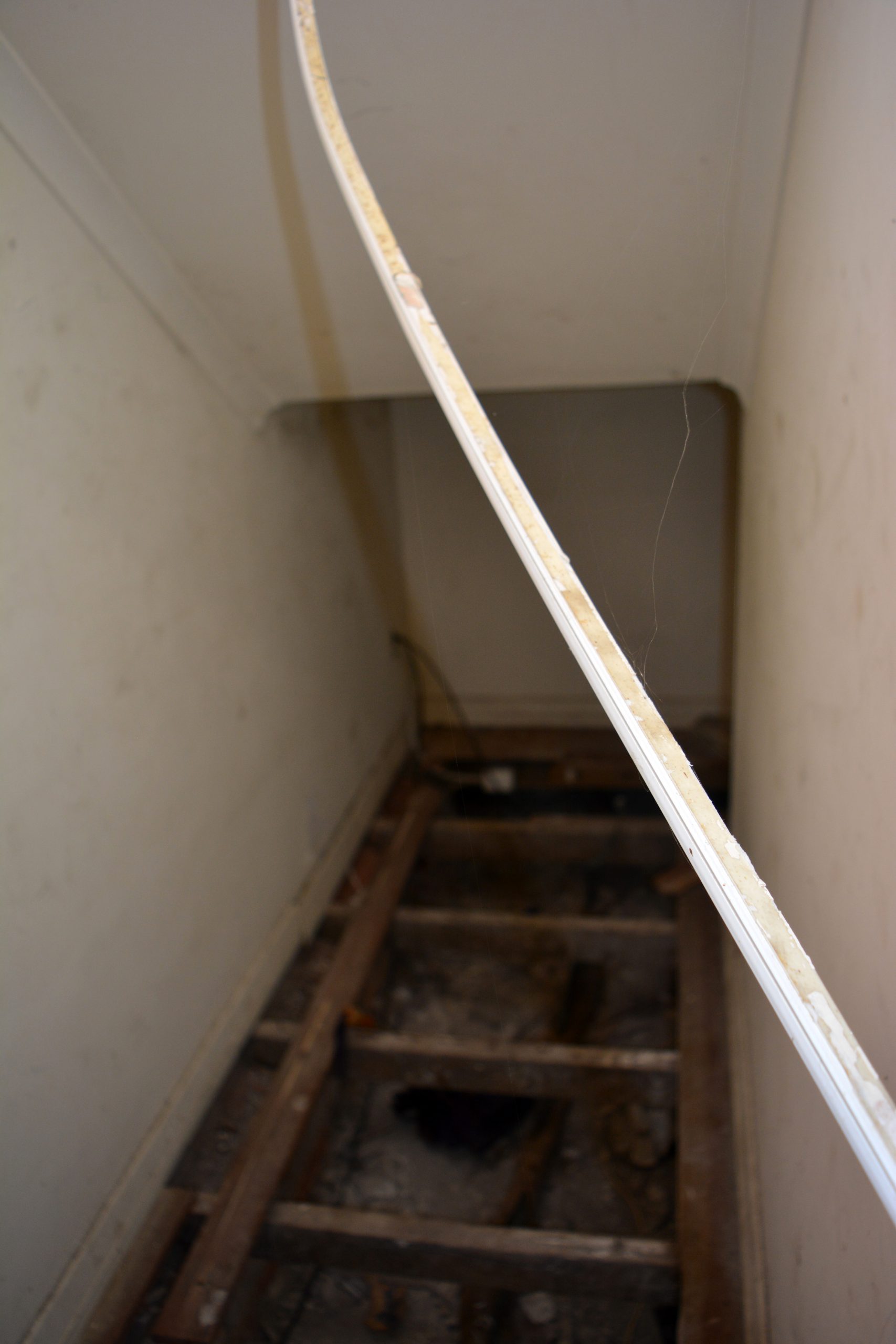 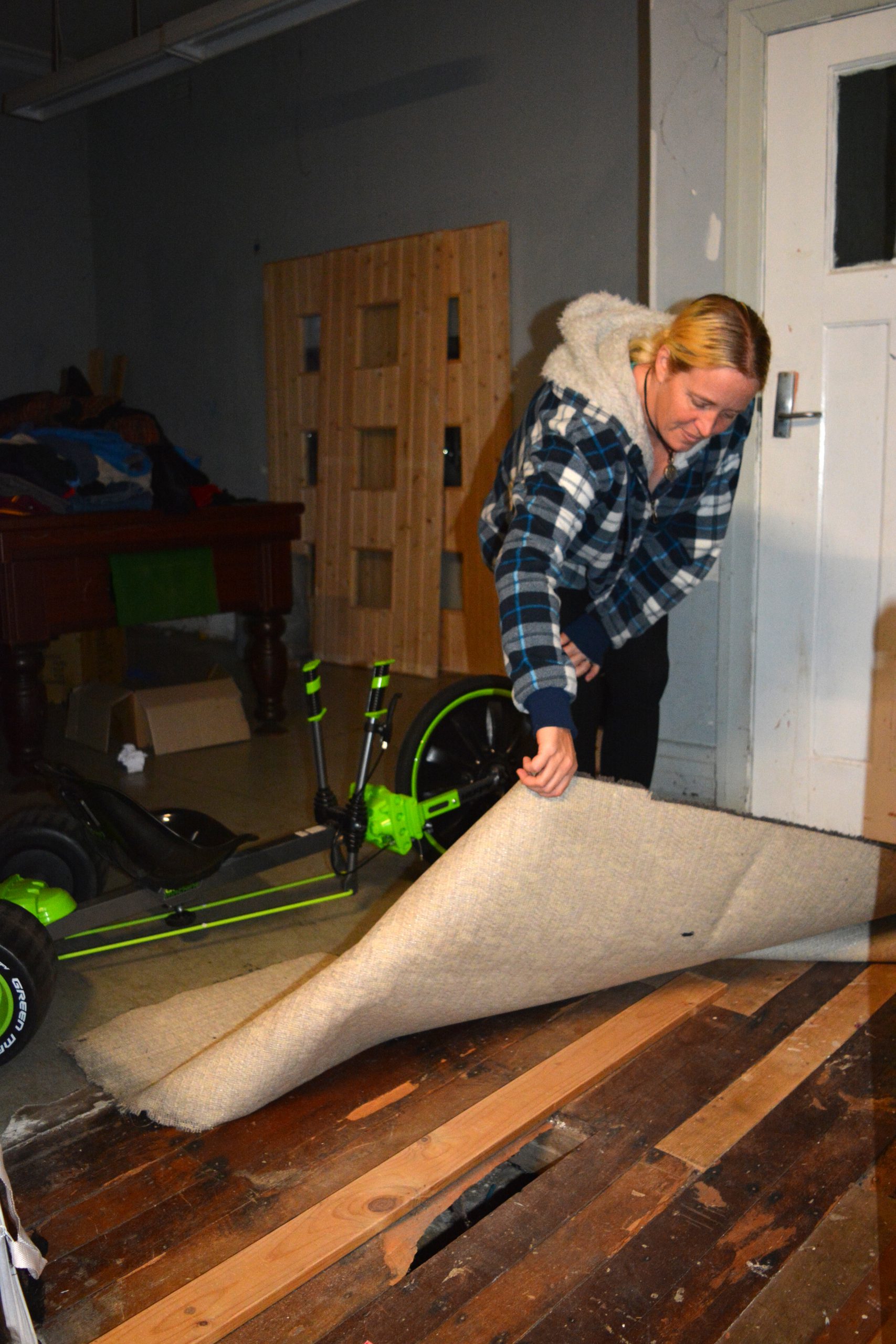 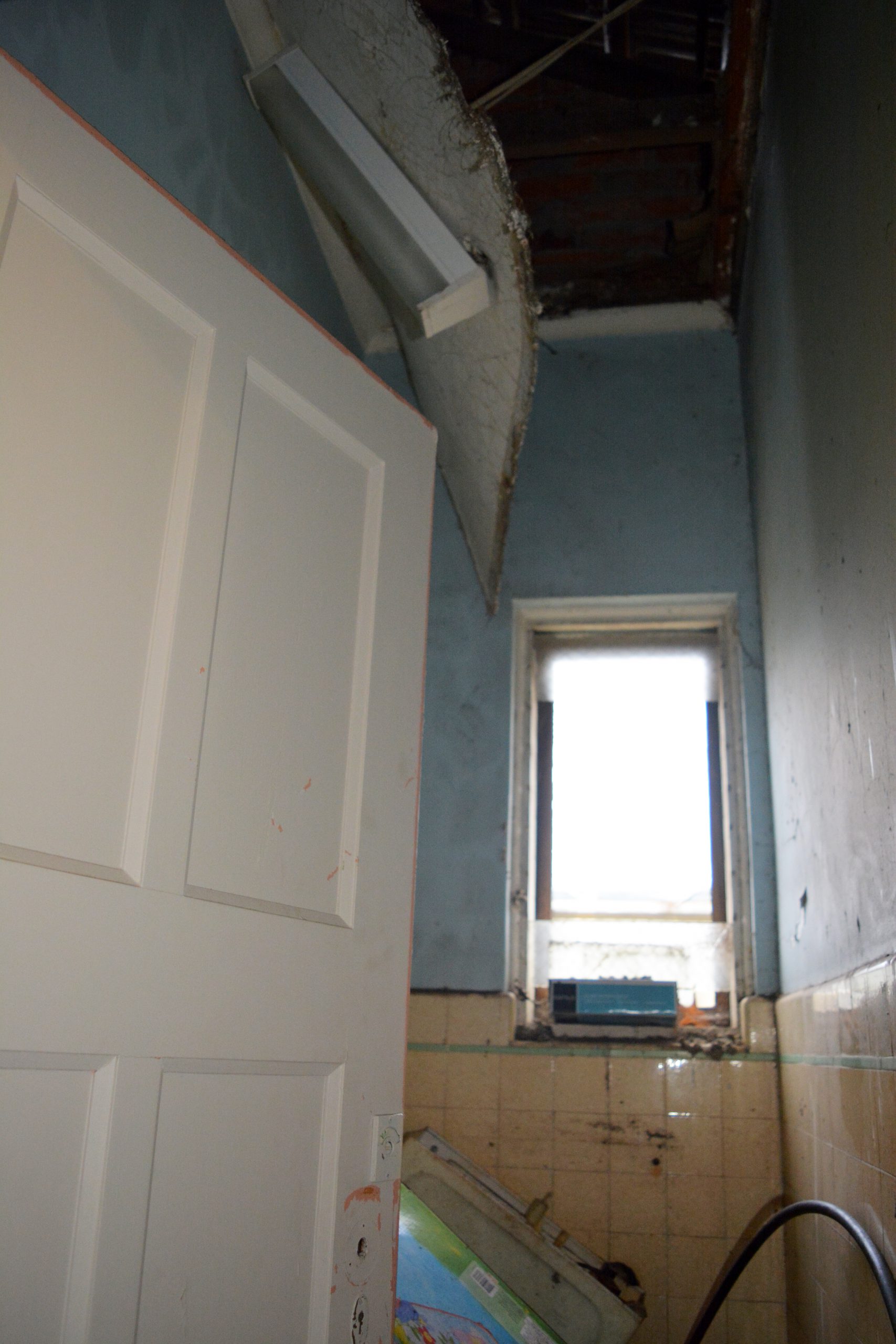 There are broken windows everywhere.

One storage area is missing its floor, exposing the dirt below. A leaky pipe hangs from the kitchen ceiling.

A toilet ceiling has been ripped off and buried in rubbish, including syringes. Holes are covered with tape.

Until the early 2000s, the Hawker Street, Moe site was home to the Presentation College senior campus before it was privately sold.

For five months, it was home to Kelly Phillips, her partner and her seven children until they recently left.

Now, together with another tenant at the former Catholic school, the family is homeless after having no choice but to leave the property because of its terrible condition

Ms Phillips, who moved to the Valley from Inverloch in January, took the property’s landlords to the Victorian Civil and Administrative Tribunal (VCAT) for alleged contract violations and was successful in having her 12-month lease terminated.

She decided enough was enough when power was cut off on 29 May due to what she claimed were unpaid bills by the landlords, forcing her children to endure three nights without power.

There is only one electricity meter which is shared by six tenants, initially under the name of Edward Williams, one of the landlords.

“The kids and I spent three nights in the house without power,” the mother of seven said.

Two days later she went to the VCAT to have the lease terminated.

The tribunal terminated the lease “on the basis of the correspondence” between her and the landlords, Mr Williams and Sharmaine Mcqualter.

Ms Phillips said her family agreed to move to the seven-bedroom property and pay $320 a week after her Inverloch house was converted to small units.

Ms Phillips agreed to lease the Moe property with the understanding the landlords would clean it up and arrange repairs, but said that never happened.

Nineteen-year-old Dayna Milito also rents a unit at the site but on 19 June, received an eviction notice after failing to pay her rent for two weeks.

The letter, dated several days earlier, required her to be out on the sane day however she has not left the site.

She used to lease the house where Ms Phillips’ family lived but moved to an attached studio unit on the same site when they left.

Ms Milito admitted she did not pay a week’s rent after receiving a letter from MCC Legal, a debt collector acting on behalf of Latrobe City Council.

The letter demanded tenants direct their rent payments to council because the landlords had failed to pay their rates. Council confirmed this.

“Following a court order, Latrobe City Council did instruct MCC Legal to issue a rent demand to the tenants because of unpaid rates by the owner,” Latrobe City general manager city development, Phil Stone, said in a written statement.

“The tenant is not required to pay rent to the landlord or owner but instead their rental payment goes towards paying off the debt.”

The Express contacted Mr Williams, who confirmed he has issues with council. However, he denied the accommodation offered to tenants was “uninhabitable”.

“It was in the same condition when we lived there with six kids,” Mr Williams said about the house on the property rented by Ms Phillips.

Mr Williams said he had conducted 15 inspections and received nine applications to rent the house “in its current state”.

“I think it’s unfair and (the tenants’ claims) will paint us as bad landlords,” he said.

Mr Williams said Ms Phillips had never given him a notice for repairs and that he had offered her one-week rent free when she moved in in lieu of cleaning up the place.

Ms Mcqualter said Ms Phillips had offered to do some of the repairs, such as the broken windows, herself.

But it’s not just Ms Phillips who has an issue with the state of the premises. The St Vincent de Paul Society in Moe is calling for the former Presentation College property to be condemned.

Meanwhile council inspected Ms Phillip’s home on 15 June at the request of the landlord.

Mr Stone said council found the former school had “a lot of cosmetic damage, unfinished cosmetic renovations and maintenance issues that are issues between the owner and the tenant and subject to their agreement”.

“No notices or orders have been issued under the Building Act as a result of this inspection,” he said.