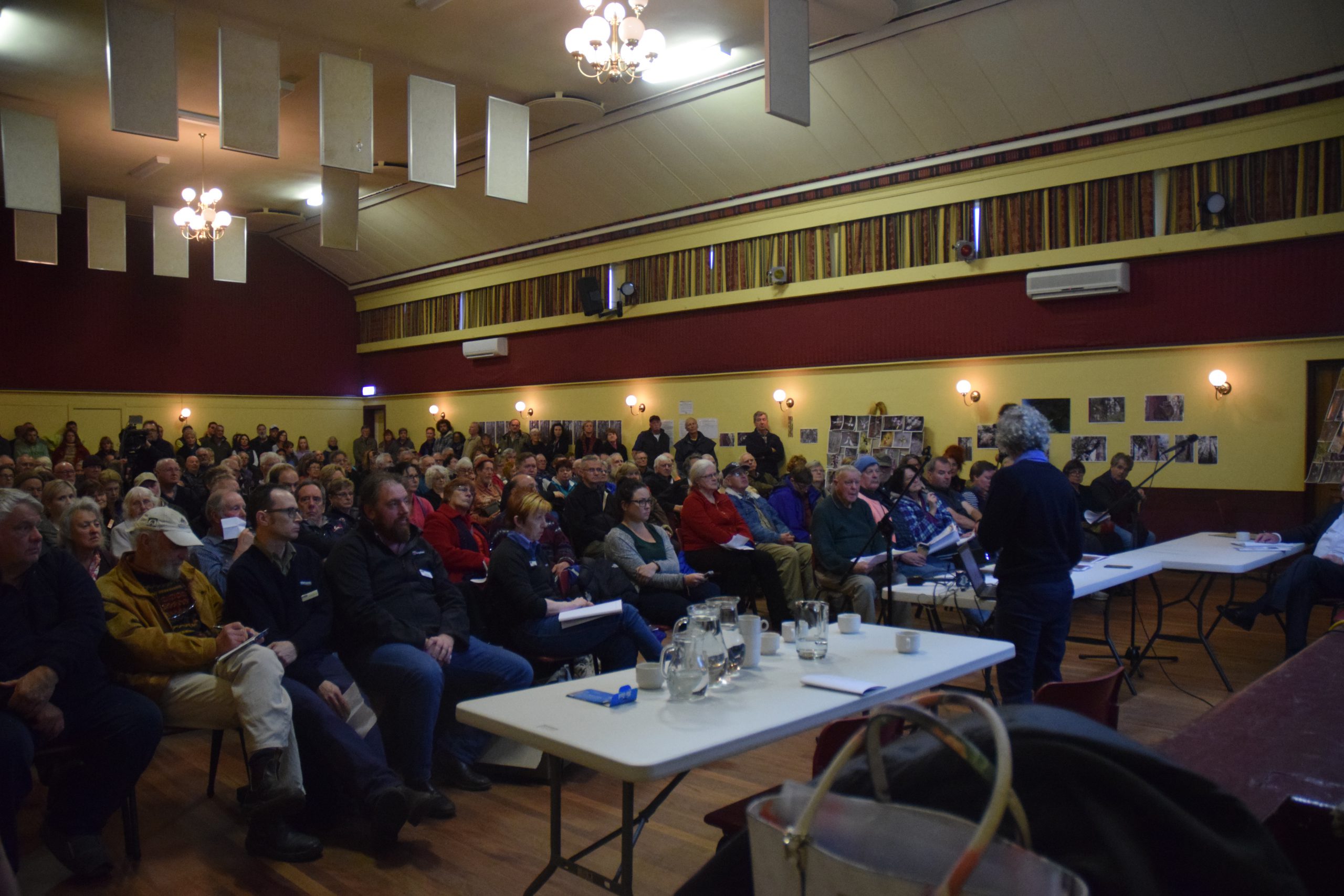 More than 350 community members descended on the Mirboo North town hall on Thursday night to voice their concerns about VicForests plans to harvest about 50 hectares of timber from state forest surrounding the town.

Speaking at the meeting, VicForests manager planning and environment Nora Devoe said VicForests was a “little surprised” by the large turnout.

“We’re in the early stages of planning here. We’ve learned a lot about how the community uses the forest,” she said.

“Our intention is to continue planning. The idea [is] that there would be a harvest in these areas sometime after 30 June (2018) and, again, the discussion for us is exactly what would be harvested and how it would be harvested. There are many ways of operating.”

Ms Devoe conservatively estimated the products harvested from the forest areas in question would generate about $8 million worth of “economic activity”.

“The parcel available for harvesting [has] been identified as being suitable. There is a strong demand for the products that these three areas can provide,” she said.

Ms Devoe said the state of Victoria had a policy to support a timber industry.

“The reason the state has that policy is because of that value and because of the 2600 regional jobs it supports,” she said.

“We have to balance a whole set of competing uses and that is a tough, tough job.”

The meeting included a time for community members to ask questions and voice concerns, many of which were in regards to the endangerment of flora and fauna in the forest area and the impact the felling could potentially have on local businesses.

“This turnout tells us why we’re here. We want to hear from this community,” he said, addressing the meeting.

“We’ve started by coming to the town to ask what are these alternate uses out there, who are you,

can you come and speak to us, can we speak to you so we can move forward together?”

Mr Spencer said a challenge for the entire state was to maintain regional jobs in the timber industry.

“I’m not shying away from competing needs is a very hard decision…we have two industries that are competing and that is a hard challenge and we will have to work through that together.”

“You’ve only got to look on trip advisor and see the comments about the Lyrebird Walk and the rail trail… our jobs will be affected very much if you go and clear all this land because that is what people from Melbourne come down to see,” she said.

Mirboo North non-migratory beekeeper Peter Gatehouse said if the forest in question was cut down it would reduce the amount of flowers available locally to his bees.

“Non-migratory bee-keepers really rely on what is in their area,” he said.

“The forest in Mirboo North is hardwood forest and has a lot of messmate timber that, when it flowers, we can produce honey from it locally rather than travelling.”

Mr Gatehouse said if the forest was logged it could reduce the locations where he could potentially source nectar in South Gippsland.

“It’s not just me, there are other commercial and recreational beekeepers in the area,” he said.