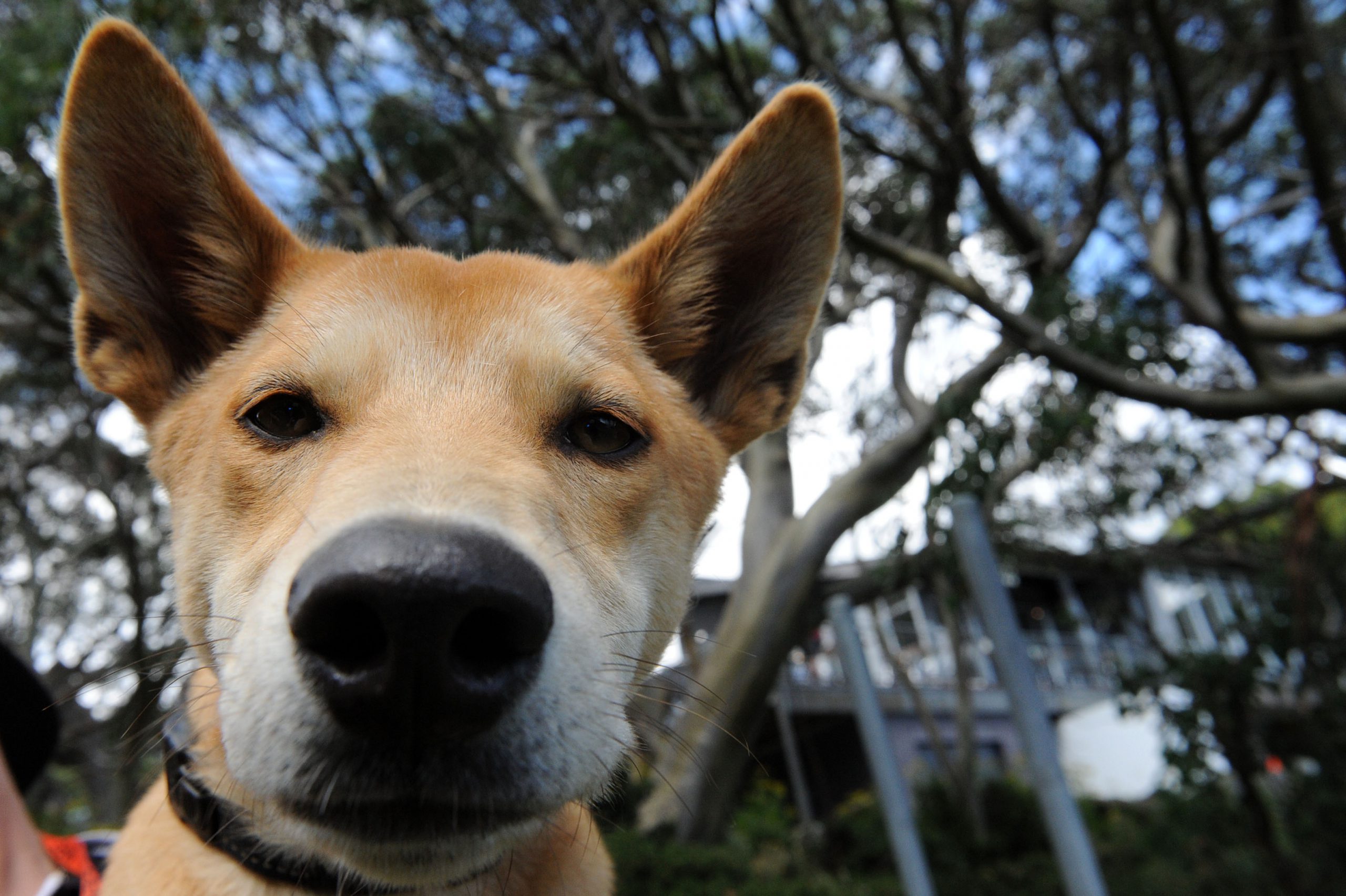 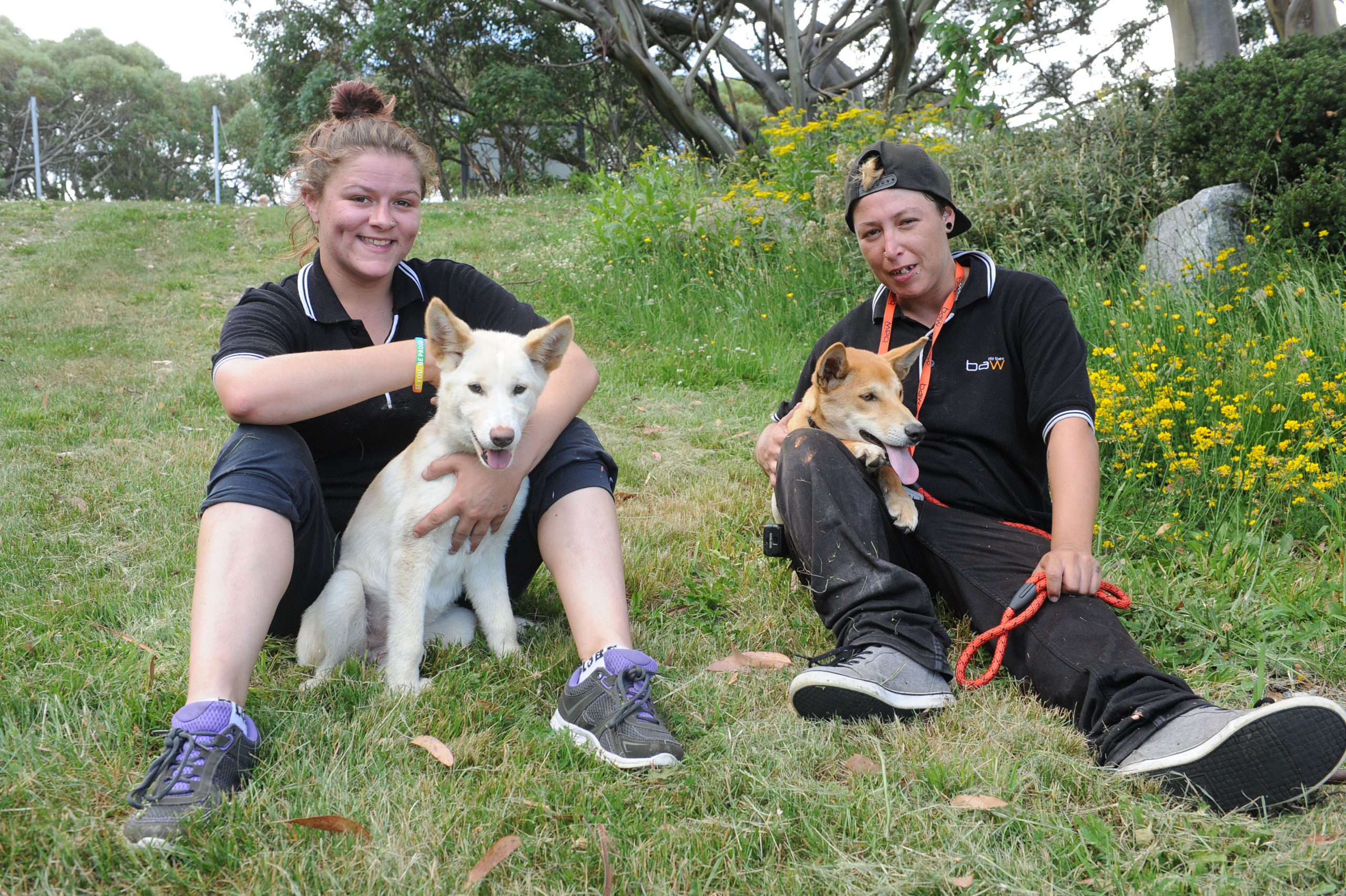 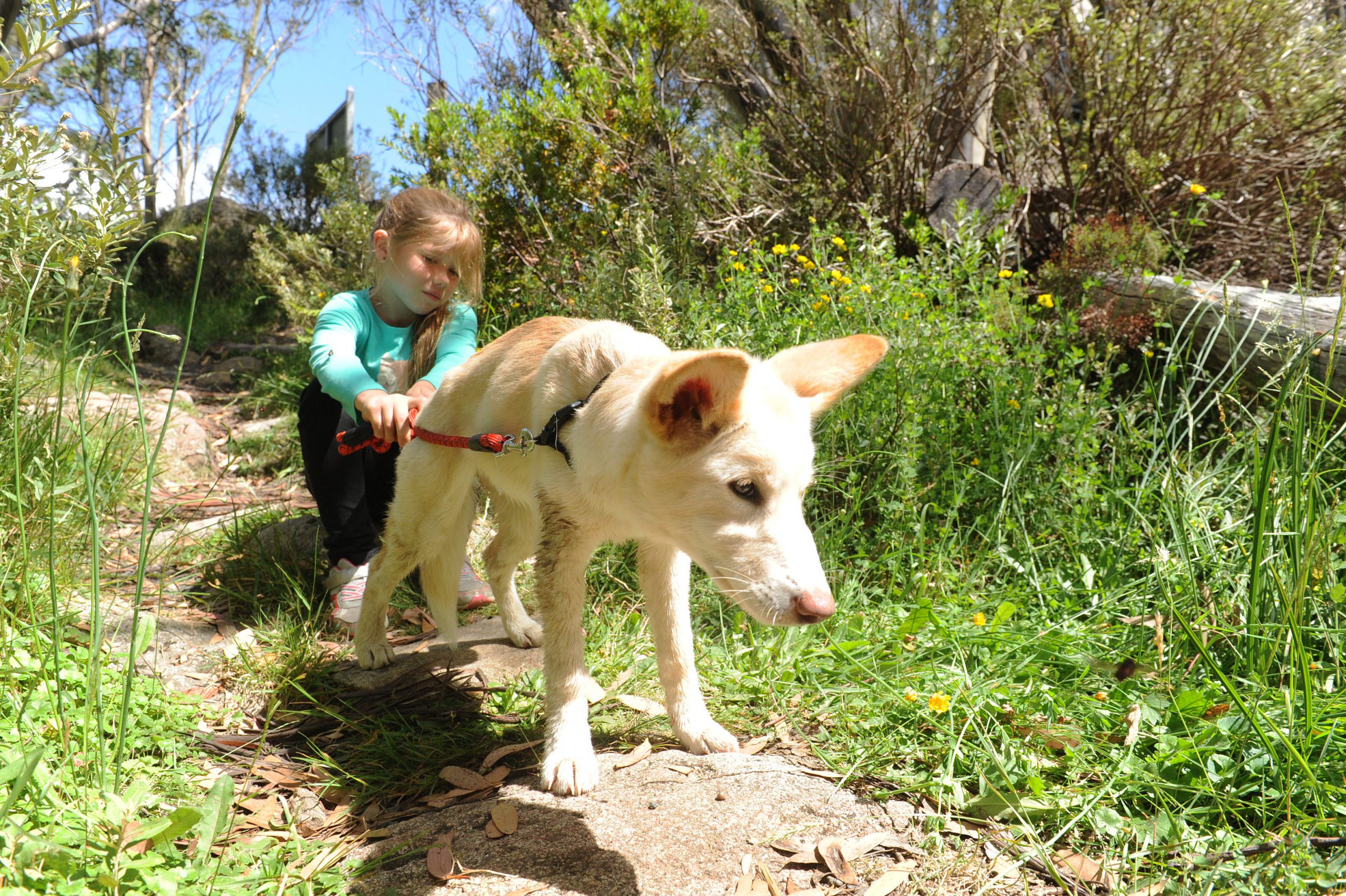 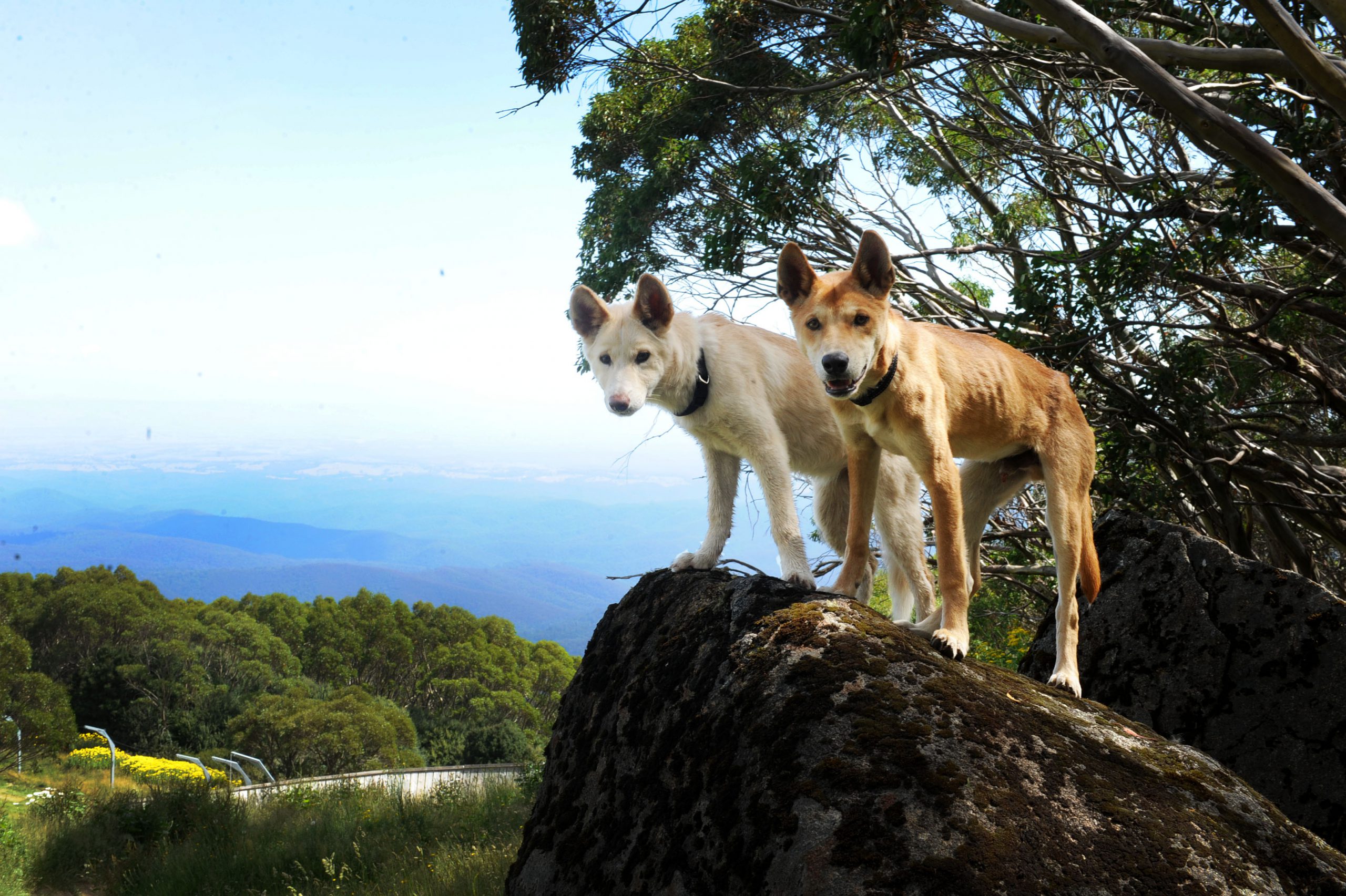 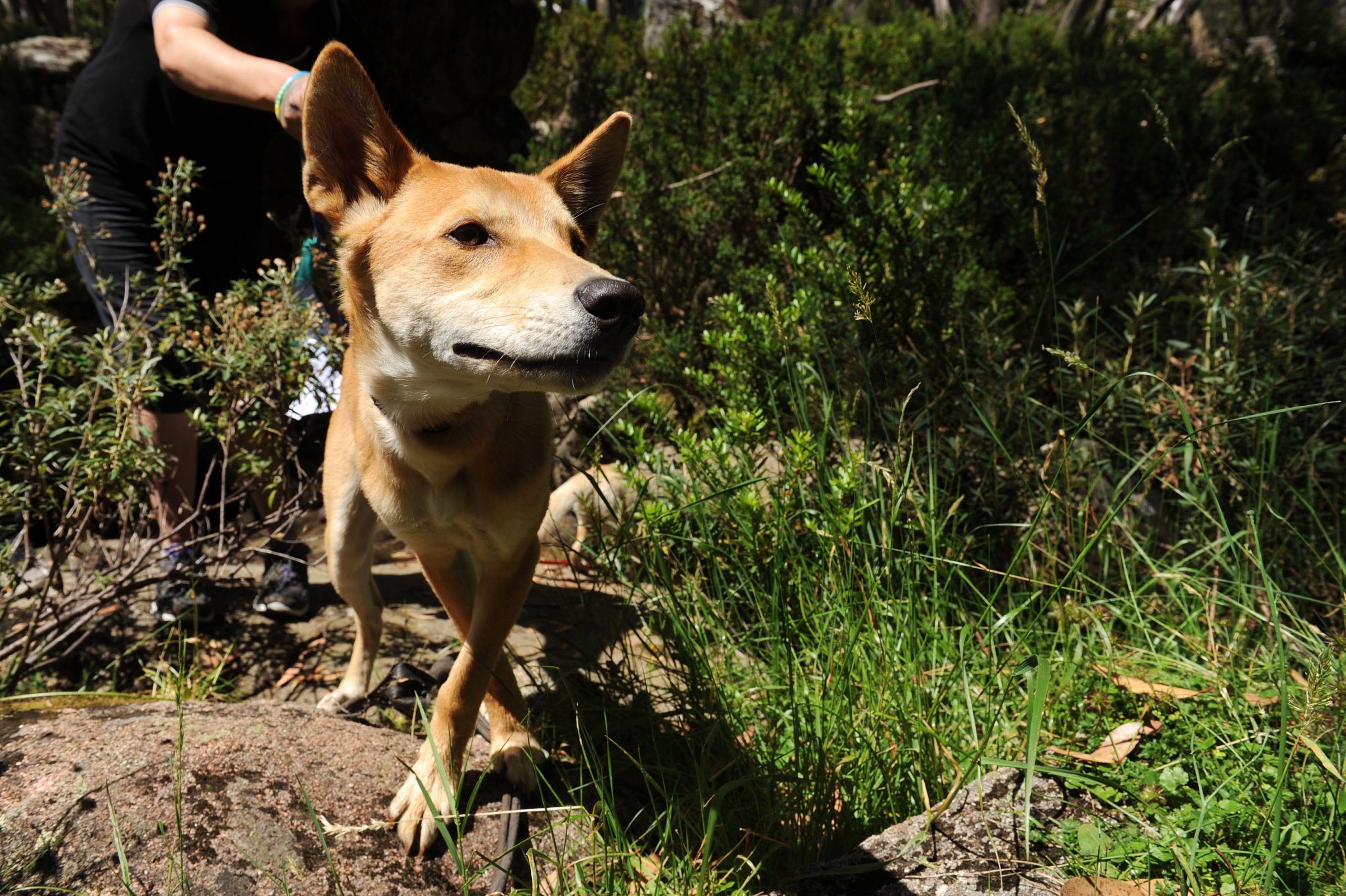 The alpine resort at Mount Baw Baw is set to build a den and research centre for one of Australia’s most publicly debated predators.

Dingo pups Rowdy and Warragul have taken up residence on the mountain since Christmas, are walked daily and roam around the office much like a pet dog, however, won’t respond to ‘roll over’ or ‘shake’.

“They will come back,” Ms Brook said.

“But they’re only obedient if they want to be.”

The female dingo born in October 2017 was recently named Warragul – an Aboriginal word for wild dog – following a naming competition.

She is a pure alpine dingo and the male alpine pup Rowdy has only a tiny amount of desert dingo in his genetics.

They came from the Dingo Discovery Sanctuary and Research Centre in Toolern Vale, which breeds pure dingoes for zoos and sanctuaries and conducts non-invasive research.

The centre’s founder Lyn Watson said when researchers had the opportunity to conduct DNA tests on wild artefacts such as skins hanging on trees, they often found pure dingo genetics in Victoria’s alpine areas.

“It’s very rare to find one and certainly rarer to find one that is fully an original dingo but they are there and there is no doubt of that,” she said.

The animals cooperated with Indigenous people in hunting and had an important role in the ecosystem as an apex predator, much like a lion.

Ms Watson was “horrendously” saddened it had become a marked animal decimated by hunting.

“They are actual guardians of the ecosystem. They are not animals who kill in same way as foxes,” she said.

“For every dingo we take out of the environment 200 foxes will move in,” Ms Watson said.

Ms Watson said a dingo needed only 500 grams of food a day and a rabbit would make a “fine meal” for a dingo for a day.

Pure dingoes can be tamed, however, not domesticated like dogs which can maintain eye contact for long periods of time.

Ms Watson said a dingo would make “very piercing” eye contact for about five seconds in its first interaction with an individual.

“People tell me they get shivers; they just got their soul read,” Ms Watson said.

The dingo would know you were OK or “not to be trusted” from then on.

She said the animals had very tender ways of showing affection to people they bonded with.

Warragul and Rowdy are part of Mount Baw Baw Alpine Resort’s tourism program and will be a feature of the future visitor centre.

The resort will work with Melbourne Zoo to create an interactive research centre with information on dingoes, the Baw Baw frog, antechinus and other wildlife.