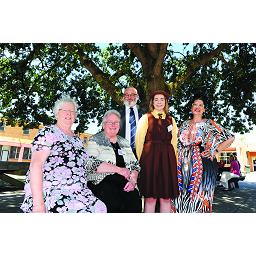 There was “a buzz” around Lavalla Catholic College’s Kildare campus last weekend as almost 400 women from across the country gathered to celebrate a common past.

The campus, formally Kildare College, was transferred to Catholic Regional College in 1988 and the huge turnout of former students and staff celebrated 60 years since the school was founded in 1958.

Reunion committee chairwoman Josie Montano, who organised the event from Brisbane, said past students and staff had travelled from as far as Perth, Canberra, Adelaide, Queensland and from all over Victoria to attend the reunion.

“Then you had somebody that lives a few streets away,” she said.

A number of Brigidine nuns also attended the event, which included a liturgy, a number of speakers including Brigidine nuns Sister Anne Hill and Sister Catriona Devlin, and former student and award-winning journalist Sue Smethurst, as well as a number of others.

“Another highlight was … each nun participated in a little procession and each nun in that procession had an item that was representative of the Brigidine Sisters,” Ms Montano said.

One nun wrote to Ms Montano following the event and said the “spirit of Brigidine [is] still very much alive” and that it was “a pleasure to catch up with staff and students”.

A nostalgia area, featuring old text books, projects and other memorabilia was “a highlight” as well as year 12 student Madeleine Whiting who donned an old Kildare College uniform and wandered around the reunion.

“There were lots of stories, lots of people remembering, reconnecting,” Ms Montano said.

“There was just like a buzz … not just of 400 women talking at the same time, it was a positive energy and they couldn’t stop saying ‘thank you’.”

A plaque commemorating the school was unveiled and will be placed at the Lavalla campus in the coming weeks.

“It was just amazing, quite overwhelming really,” Ms Montano said.

“It was a not-for-profit [event], so the remaining funds, which I think was about $1500, will be donated to the school which has a fund they created, Beyond the Acorn, that is there for students in need.”