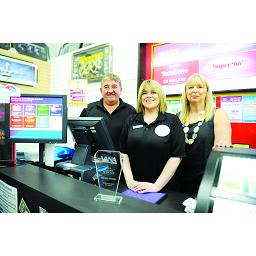 It wasn’t luck of the draw that caused Traralgon News and Lotto TattsLotto manager Angela Temple to hit the jackpot with an industry award last weekend.

Hard work and leadership earned Ms Temple the title of Victorian Association for Newsagents Employee of the Year.

Ms Temple “did not expect” to receive the state-wide industry award, however, attributed the honour to her team members who had “really stepped up” during some “hard times”.

“Everybody pulls their weight,” she said.

“This isn’t just for me, it is for the whole team.”

The Traralgon resident of 14 years, Ms Temple has been working at the Traralgon newsagent’s for three years and “loves” her job.

“We get a lot of regular customers in. It is good to have a bit of a chat, you know everyone by name, everyone gets on and it is a great place to work,” she said.

“We’ve had a good year, we’ve had two Division One’s as well, so there has been a bit of excitement in the store.”

Business owners Gary and Cheryl Garth were “thrilled” Ms Temple had received the award and said she “deserved it”.

“Ange will take on what she’s got to do to help the business. She works really well with the team and directs them well,” Mr Garth said.

“We were really pleased to put her up and thought she’d have a shot at winning if she did.

“Really well done to her.”