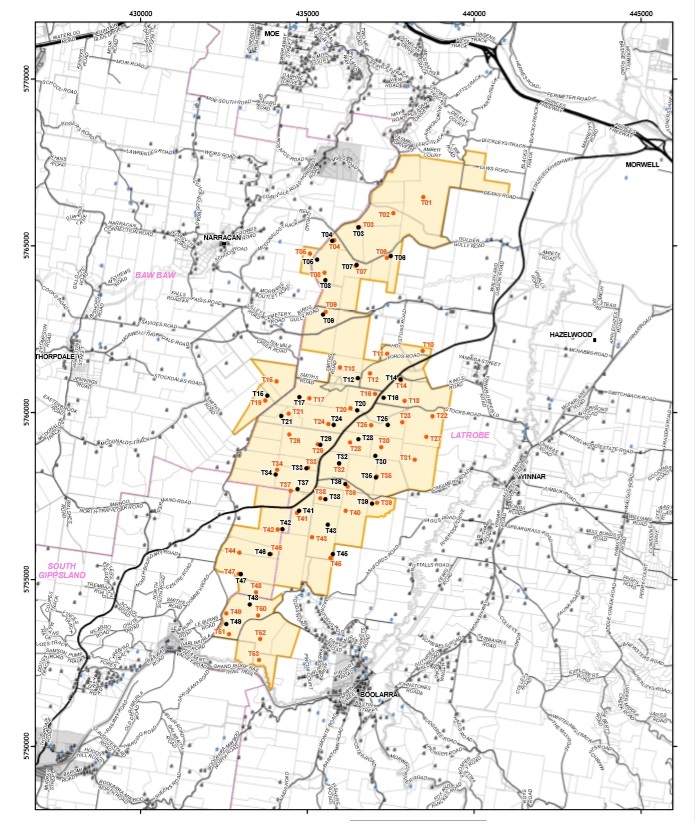 A second group of residents have formed a body in response to OSMI Australia’s plans to construct a windfarm on the outskirts of the Latrobe Valley.

The Strzelecki Sustainable Futures group, which formed in support of the Delburn Windfarm going ahead, was established following the formation of another group of residents, the Strzelecki Community Alliance, which is objecting to the proposal.

Proposed to be located on HVP Plantations’ land, OSMI’s original plan for the windfarm comprised 53 turbines, each with a total tip height of 250 metres.

However, a second iteration of the plans released recently cut down the number of turbines to 35.

Strzelecki Sustainable Futures spokeswoman and Boolarra resident Cath Thompson said the group had formed because some community members felt a positive perspective on the windfarm was needed.

She said SSF supported the windfarm because it was a “much needed renewable energy project that transitions the Latrobe Valley away from coal”.

Other reasons SFF cited for its support of the Delburn Windfarm included: the turbines would link into existing transmission lines; patches of remnant native vegetation within the area would not be removed, and; it would show action and leadership on climate change.

SFF members also believed OSMI had established a fair process for engaging with the community.

“We encourage people to speak with [OSMI] about the specifics of their concerns,” Ms Thompson said.

The SFF did not reveal how many members it had, saying the group was in its infancy.

The Strzelecki Community Alliance – the group opposing the windfarm – has concerns about the proximity of turbines to properties and potential issues about noise, vibrations, flicker and visual pollution.

She said 150 households within two kilometres of turbines were represented in the group under OSMI’s first iteration of the plan.

The group was consolidating a formal response to OSMI’s updated plans, she said, but was waiting for feedback from members.

She said the group now had 400 households signed up, but did not know how many households would be within two kilometres of turbines under the new plans.

“We are personally affected by this [the windfarm proposal] and we are concerned by this,” she said.

Latrobe City mayor Graeme Middlemiss said council was yet to declare its position on the windfarm.

But Cr Middlemiss said the state government would determine if an OSMI application for the windfarm would be approved.

He said OSMI had indicated it would apply to the planning minister early next year, giving council “considerable time” to examine the proposal.